Everyone now sees that Trump plans to steal the election. But major newspapers buried the story: No big deal! 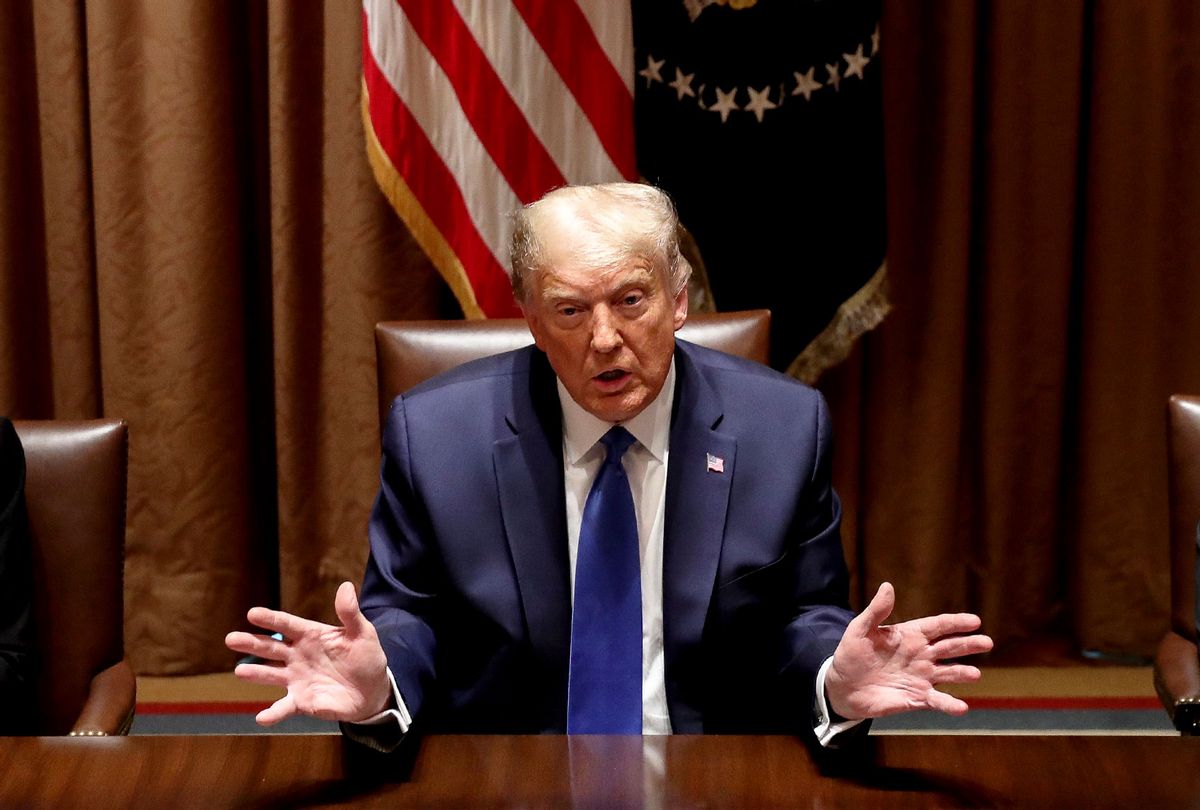 People who know and care about elections and democracy frantically sounded the alarm on Wednesday as Donald Trump's intention to steal the election became undeniable.

But the leaders of our nation's top newsroom weren't listening. The New York Times put its article on Trump refusing to commit to a peaceful transition of power on page A15. The Washington Post story was on A4. Other news organizations underplayed it as well. Despite all the other news, this should have been a screamer headline everywhere.

Consider the magnitude of what they ignored on Wednesday.

Even before Trump's comments, one of the country's top election law scholars, Richard Hasen, had written in Slate that "the litigation strategy of the Trump campaign and its allies has become clear: try to block the expansion of mail-in balloting whenever possible and, in a few key states, create enough chaos in the system and legal and political uncertainty in the results that the Supreme Court, Congress, or Republican legislatures can throw the election to Trump if the outcome is at all close or in doubt."

Hasen's stark conclusion: "This is a five-alarm fire, folks. It's time to wake up."

And the Atlantic had already published Barton Gellman's terrifying, detailed article describing scenarios in which Trump "uses his power to prevent a decisive outcome against him."

Gellman actually buried — deeply buried — the lede, which was that he had proof that "the Trump campaign is discussing contingency plans to bypass election results and appoint loyal electors in battleground states where Republicans hold the legislative majority."

Then, during an afternoon appearance ostensibly about ending anti-conservative censorship in social media (ha!), Trump laid out his plan just as plain as day.

After indulging in his typically baseless conspiracy theories about counterfeit mail-in ballots, the president was asked if that's why he's in a such a hurry to replace the late Supreme Court Justice Ruth Bader Ginsburg.

I think it's better if you go before the election because I think this — this scam that the Democrats are pulling — it's a scam — this scam will be before the United States Supreme Court. And I think having a 4-4 situation is not a good situation, if you get that. I don't know that you'd get that. I think it should be 8-nothing or 9-nothing. But just in case it would be more political than it should be, I think it's very important to have a ninth justice.

You can't get any clearer than that. As Atlantic writer Edward Isaac-Dovere tweeted:

Trump fully intends the Supreme Court — not the voters — to make the call. And that of course is because his campaign strategy is not to win a majority of the votes, just to win enough to be able to toss things to the lawyers.

As far as I'm concerned, that remains the major revelation of the day — even after Trump's mind-blowing and somewhat incoherent refusal to agree to a peaceful transition of power.

Trump: Well, we're going to have to see what happens. You know that. I've been complaining very strongly about the ballots. And the ballots are a disaster. And — and —

Q: I understand that, but people are rioting. Do you commit to making sure that —

Trump: We want to have — get rid of the ballots and you'll have a very trans- — we'll have a very peaceful — there won't be a transfer, frankly; there'll be a continuation.

The ballots are out of control. You know it. And you know who knows it better than —

There is only one legitimate, decent and normal answer to that question: "Of course."

Although I think Trump was primarily reacting the way he always does to the suggestion that he might lose — and was also continuing his attempts to delegitimize mail-in ballots — his inability to say "of course" was epic: the stuff of which history is made; the stuff of banner headlines.

To the extent that Trump's intention to steal the election is undeniable, well, at day's end, Trump himself didn't deny it.

There's some evidence that at least some major newsroom reporters understood the magnitude of what they had witnessed. In the New York Times, Michael Crowley wrote a story full of important context — and stated definitively:

Mr. Trump's refusal — or inability — to endorse perhaps the most fundamental tenet of American democracy, as any president in memory surely would have, was the latest instance in which he has cast grave uncertainty around the November election and its aftermath.

And he quoted Julian E. Zelizer, a professor of American political history at Princeton University, as saying:

"He's threatening the election process and saying out loud what everyone has assumed he's been thinking… The more he makes these arguments, the more he normalizes the fact that this can be part of the conversation."

In a New York Times "live update" on Thursday, Jonathan Martin explained that "this was no typical Trump provocation: Acceding to the will of the voters is the linchpin of American democracy."

(Much more lamely, the Washington Post's Colby Itkowitz noted Trump's previous threats not to accept election results and concluded that "Refusing to ensure he would support a peaceful transfer of power between administrations if he loses this year's election seems to escalate that threat amid partisan tensions.")

But as usual, to capture the real drama of what's going on, you have to go to the opinion writers — and the editorial cartoonists.

So here is the Washington Post's Greg Sargent, explaining that "what really matters here is that Trump is making an actual declaration of intent — not just to refuse to respect the outcome, but rather to try to cancel and override it, if he is able to get away with it."

And read this incredible Twitter thread from Crooked media editor in chief Brian Beutler, prompted by the extraordinary spectacle of campaign reporters complaining bitterly about Joe Biden's tardiness. It killed me.

Why ignore the alarms?

So the big question then is: Why did senior editors decide to bury the story?

I have some theories. (Keep in mind that the entire work product of Press Watch is, in some ways, my attempt to answer that and related questions.)

One overarching problem is that our major newsrooms have simply gotten so corporate and even-keeled that top editors value unflappability as a signal virtue. (OK, I admit I take this one a little personally, being a flappable person. A top Washington Post editor once called me "hysterical.") Flappable people don't rise through the ranks. Corporate people do.

Journalism to me is about crusading for the truth. But the notion that a serious, major news organization would pursue a crusade on behalf of its community is considered hippie shit by the people in charge these days. So is consistently standing up to a lawless con man. They've gotten used to printing lies. They barely squawk when Trump calls them the "enemy of the people." They have their algorithms, and they won't give them up no matter what. They just continue to "do the work."

So yeah, their news souls are dead. There, I said it.

The more immediate cause, however, is that these newsroom leaders made a considered and intentional decision not to panic after Trump was elected. This was an epic, obvious mistake, and everything that has happened since flowed from tha decision, and was in some sense entirely predictable.

They should have gone on a war footing — and by that I don't mean a partisan war against Trump. I mean a journalistic war against lies, ignorance and intolerance.

These top editors decided instead that they had made a mistake in underestimating — and not sufficiently heeding — the (non-majority of) people who voted for Trump. So they sent reporters out to diners to talk to Trump supporters instead of trying to educate and redeem them.

They decided their normal methods of covering a president were appropriate — and that even if they weren't, they were too important to modify for just one. So they got used to writing stories about whatever Trump said, as if that were normal.

They decided to keep a level head.

Now they can't suddenly change their behavior. Partly, that's inertia. But it's also because that would mean admitting that maybe they were wrong before. And they're too proud to admit they're ever wrong.

So they don't listen to the people who are warning them, ever more loudly, of the extraordinary danger ahead. They muffle the alarms, hand out earplugs, close the windows and tell everyone to continue business as usual.