“So much misinformation”: Fauci calls out Fox News and Trump’s new adviser for “outlandish” claims

"Fox News . . . some of the things that they report there are outlandish, to be honest with you" 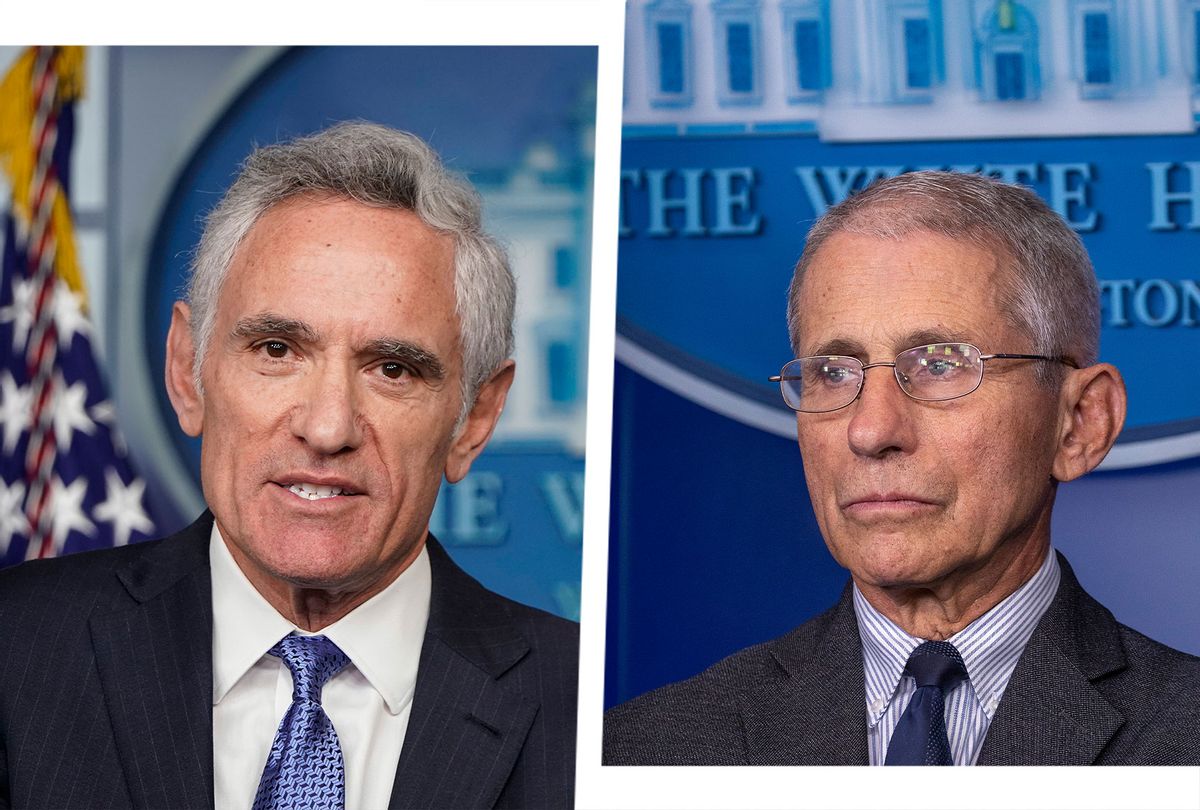 Fauci called out Atlas, a frequent former Fox News guest who has no background in infectious diseases but has pushed the discredited "herd immunity" strategy and questioned the efficacy of masks, during an interview with CNN chief media correspondent Brian Stelter.

"Most are working together," Fauci said of the administration's coronavirus advisers. "I think you know who the outlier is."

Stelter asked Fauci if he was worried that Atlas was misleading the president.

"Well, yeah, I'm concerned that sometimes things are said that are really taken either out of context or actually incorrect," Fauci responded.

Fauci pushed back on Atlas' skepticism of masks, noting that the "data [was] very strong."

"If I have an issue with someone, I'll try and sit down with them, and let them know why I differ with them and see if we can come to some sort of resolution," he said. "So, I mean, my differences with Dr. Atlas — I'm always willing to sit down and talk with him, and see if we could resolve those differences."

Fauci's comments came after an NBC News reporter overheard Dr. Robert Redfield, the head of the Centers for Disease Control and Prevention, trashing Atlas on a flight from Atlanta to Washington.

"Everything he says is false," Redfield said, according to the outlet.

Fauci also criticized Fox News, whose segments Trump repeatedly blasts out to his millions of followers on Twitter, for contradicting "obvious" facts.

"There is so much misinformation during this very divisive time that we're in, and the public really needs to know the facts," he said. "Some of the media that I deal with really kind of — I wouldn't say distort things, but certainly give opposing perspectives on what seems to be a pretty obvious fact. If you listen to Fox News — with all due respect to the fact that they do have some good reporters — some of the things that they report there are outlandish, to be honest with you."

Atlas, a neuroradiologist who serves on the conservative Hoover Institution, caught Trump's eye during his frequent appearance on Fox News, The New York Times reported. Since joining the coronavirus task force in the summer, Atlas has pushed a "herd immunity" strategy "akin to an approach used to disastrous effect in Sweden" and questioned the use of masks and the threat of the coronavirus to children, according to the outlet.

The CDC did not deny that Redfield said "everything he says is false" on the flight.

"Positions on three issues — the value of wearing a mask, youth COVID-19 infections, and where we are currently with herd immunity — are the positions that Dr. Redfield has different positions on than Dr. Atlas," the CDC said in a statement. "The doctors agree on many other issues."

Fauci has repeatedly warned that herd immunity would require more than 70% of the U.S. population to be infected.

"If everyone contracted it, even with the relatively high percentage of people without symptoms . . . a lot of people are going to die," Fauci said in August. "The death toll would be enormous."

Fauci said last week that the U.S. was nowhere close to the necessary level of antibodies.

"We are nowhere near herd immunity yet," he said. "The mean in the country is around 2 to 3%."