Even patients with no coronavirus symptoms may have heart issue months or years later, doctors find 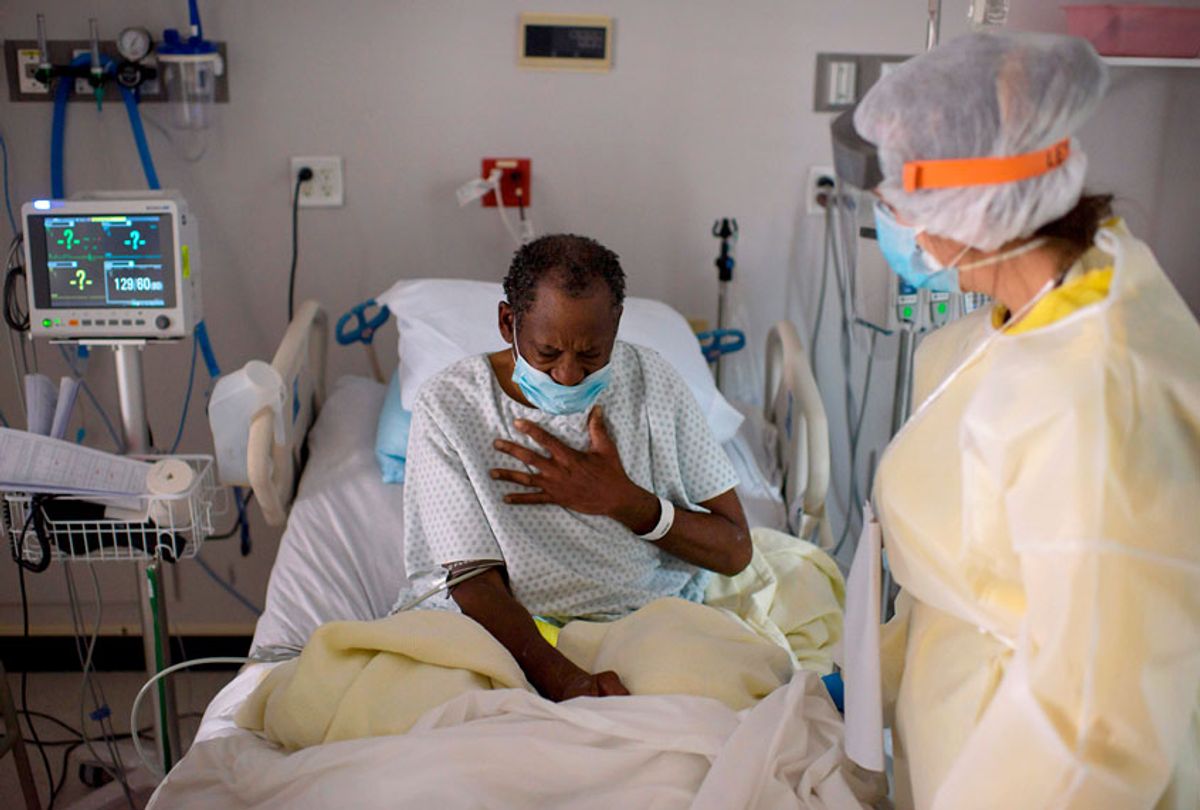 A healthcare worker tends to a patient in the Covid-19 Unit at United Memorial Medical Center in Houston, Texas on July 2, 2020. (MARK FELIX/AFP via Getty Images)
--

One of President Trump's top medical advisers, Scott Atlas, is urging the administration to lean into a national "herd immunity" strategy to combat the pandemic, according to a report by the Washington Post.

The report explains that Atlas, a neuroradiologist and fellow at Stanford's Hoover Institution— a right-leaning think tank and research center — is pushing for the United States to embrace a laissez-faire pandemic management model like Sweden's, by allowing the coronavirus to spread freely to most of the population while protecting those in senior homes or in other vulnerable populations. Yet Sweden's laissez-faire approach resulted in the country having a higher per-capita death rate than its neighboring comparable countries. As Salon previously reported, by June, Sweden's per capita COVID-19 death rate was 43.88 out of every 100,000 people, compared to 4.46 out of every 100,000 people in Norway and Denmark's rate of 10.00 out of every 100,000 people.

In any case, the herd immunity–building approach has another major problem, only recently realized: The long-term health impact the coronavirus can have on victim's hearts. Troublingly, even those who seem to have less-pronounced COVID-19 symptoms or no symptoms at all may discover that they have heart issues later.

"That's certainly the concern," Dr. Thomas Maddox, Chairman of the American College Cardiology's Science and Quality Committee and a professor at the Washington University School of Medicine in St. Louis, told Salon. "Even for people who have a relatively benign infection, most people do not need the hospital even if they do have confirmed COVID-19. . . .  but like we saw with the German study, sometimes even those folks, at least a subset, may have long-term cardiac damage."

The study Maddox is referring to was published in JAMA Cardiology by German researchers in July. The study, which used Cardiac Magnetic Resonance (CMR) imaging in 100 recently-recovered COVID-19 patients, identified ongoing myocardial inflammation in 60 percent of the recovering volunteers. In total, 78 percent had abnormal CMR findings.

"These findings indicate the need for ongoing investigation of the long-term cardiovascular consequences of COVID-19," the authors state in the study.

"It was really concerning that about 80 percent of people had some evidence of scarring or some swelling in the heart," Maddox said. "Even if they hadn't necessarily been that sick."

A separate autopsy study by a different group of German researchers had similar findings, in that the coronavirus had affected COVID-19 patients' hearts.

Maddox explained that there are several concerns around how coronavirus affects the human heart.

"We believe that the heart can be affected by COVID in a couple of ways," Maddox said. "One is that the infection and stress resulting from an infection can cause injury to the heart, just almost as a bystander effect with the heart working so hard to fight off the overall viral infection that can cause damage."

The second, Maddox said, that there might be some "direct viral invasion," although the evidence of that doesn't necessarily stack up. A third concern is for people who have severe symptoms, there could be an overreaction of the immune system attacking the heart. The fourth is related to clotting in the body.

"When the heart gets infected, we think that's related to the overall inflammation, and we think some of the clotting in our blood vessels and other parts of the heart can also cause heart damage," Maddox said. "So, as best as we can tell, some mixture of those four various things can cause heart damage."

As Scientific American recently reported, a growing body of research suggests COVID-19 has detrimental long-term effects on the heart, even among very healthy young people. Indeed, a COVID-19-positive football player at Indiana University was reported to be suffering from heart issues, along with a University of Houston defensive lineman who reported "heart complications related to COVID-19."

Shelby Hedgecock, a 29-year-old living in Los Angeles, tested positive for COVID-19 on April 20. While she no longer tests positive for the coronavirus, she's still struggling with symptoms and considers herself to be a "long-hauler." At first, her symptoms included intense headaches and gastrointestinal issues, but it progressed to intense shortness of breath. Hedgecock told Salon her "lungs, chest and spleen" are "permanently scarred." As a former physical trainer, she can no longer overexert herself in part due to heart issues. Three weeks ago, she was sitting at her computer and her heart rate jumped up to 155 beats per minute.

"I was literally doing nothing," Hedgecock said. "And it stayed that way for about 45 minutes. . . . and since then I have been having the random shortness of breath, chest pain — I've had to wear a heart monitor for a couple of weeks."

Hedgecock said she's waiting to see a cardiologist to see what's going on.

"I had none of these issues prior to COVID," Hedgecock added. "It's quite alarming."

"It looks like there's long-term lung damage, and this affects various organ systems," Maddox said. "So I think we want to be careful of being too cavalier and saying, 'Oh, throw everybody together and get everybody infected, we'll get enough antibodies circulating to protect everyone,' because I don't think it's that simple."

"I think there may be a fairly large number of people who would have long-term health problems, if we adopted that strategy," Maddox added.