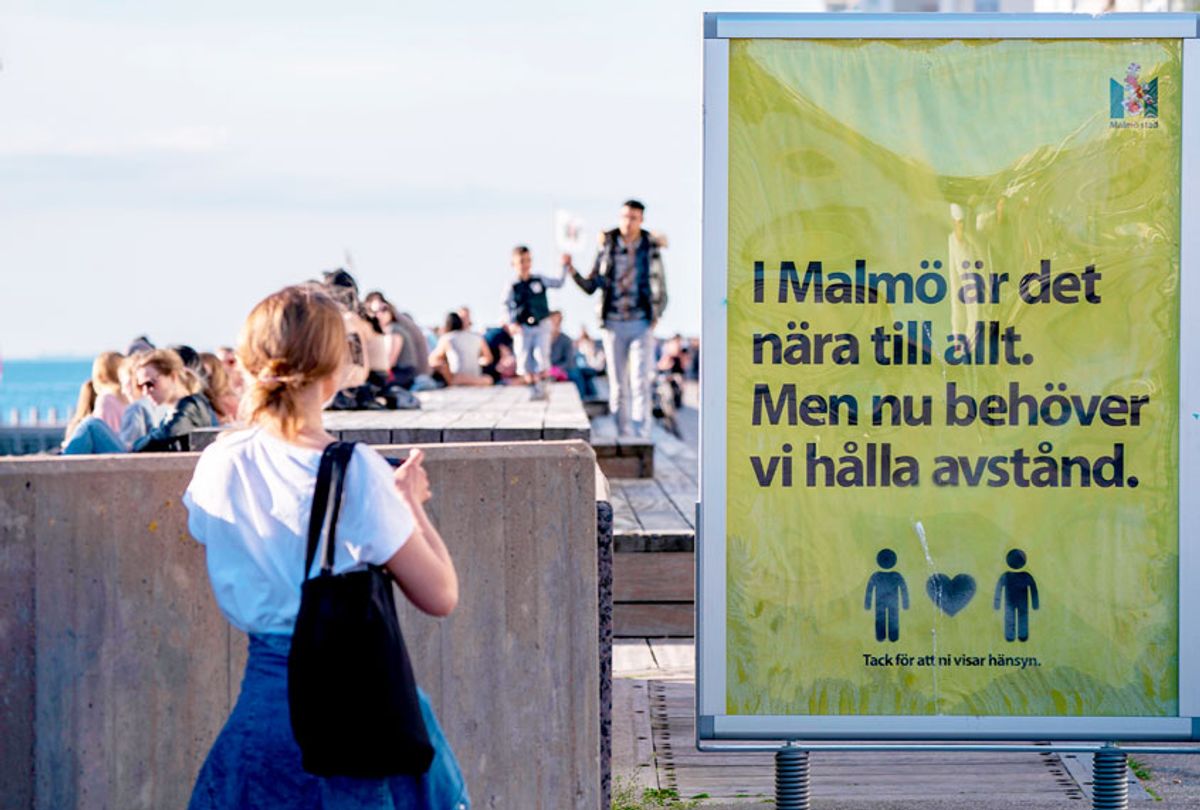 People enjoy the warm evening at Sundspromenaden in Malmo, Sweden, on May 26, 2020, amid the coronavirus pandemic. - The sign reads 'In Malmo everything is near. But now, we need to keep distance'. (JOHAN NILSSON/TT News Agency/AFP via Getty Images)
--

Public health officials in Sweden projected that anywhere from 1,100 to 4,400 more coronavirus-related deaths are to be expected in their country. The death projections are likely a consequence of the Scandinavian nation's controversial hands-off response to the pandemic, one which many right-leaning Americans have sought to emulate.

State epidemiologist Anders Tegnell from the country's Public Health Agency told reporters on Tuesday that the most likely scenario is that there will be clusters of new cases which will quickly subside. He added, "we've seen [this increase in cases] now in different parts of the world, and which seems like something that COVID-19 is creating more than most other diseases." He also claimed that "in Sweden, the positive trend with a fairly quick decline in cases continues."

The report itself laid out several possible scenarios for the coronavirus' path through Sweden. If the virus continues to spread in accordance with current trends, the report projects that only 1,100 more people will die. If there is a brief spike due to people abandoning safety procedures and then resuming them, the death toll is expected to increase by roughly 3,250. If COVID-19 follows a traditional pandemic trajectory, more than 4,400 deaths related to the virus may occur.

Infamously, Tegnell denied that wearing face masks would make a difference, stating that there was "little scientific evidence" that masks would do anything. That is untrue, and contradicts the scientific consensus on face masks as a preventative public health measure.

Tegnell defended himself last month when confronted about Sweden's death toll, telling the Swedish newspaper Dagens Nyheter that Sweden's Public Health Agency "didn't know that there would be such a big potential for the disease to spread in elderly care homes, with so many deaths" and that "we knew that group was very fragile and that we would get a lot of deaths if they got infected. But we didn't know that the disease would enter so easily and for the spread to be so big."

Despite these sobering facts, Tegnell insisted that the social distancing recommendations "worked well," that he did not believe Sweden should have done things "completely" differently and that "if we were to encounter the same disease, given exactly what we know about it today, I think we would reach a conclusion to act somewhere in between what Sweden did and what the rest of the world did."

Indeed, Sweden has not enacted as many public health restrictions as most other European countries, including not mandating face masks despite the World Health Organization's recommendation and evidence that masks can effectively reduce transmission of the virus. The country has urged citizens to work from home if possible, for individuals above 70 to stay at home and to avoid unnecessary travel, as well as to practice social distancing. The country did also close universities and ban gatherings of more than 50 people.

Sweden has become something of a rallying cry for conservatives who oppose the economic shutdown and other measures that have been taken to address the pandemic. Sweden decided not to issue stay-at-home orders or forcibly close businesses like restaurants and cafes. It has kept open schools for children under the age of 16 and has only recommended masks for healthcare personnel. As Professor Olle Kampe, a senior consultant in endocrinology at the Karolinska Institute in Stockholm, told Business Insider in May, "We are sacrificing old people and people with diseases, so I don't [think] that it's something that anyone should copy."