Some on the right admire the Swedish response, which data reveals caused far more deaths than neighboring countries 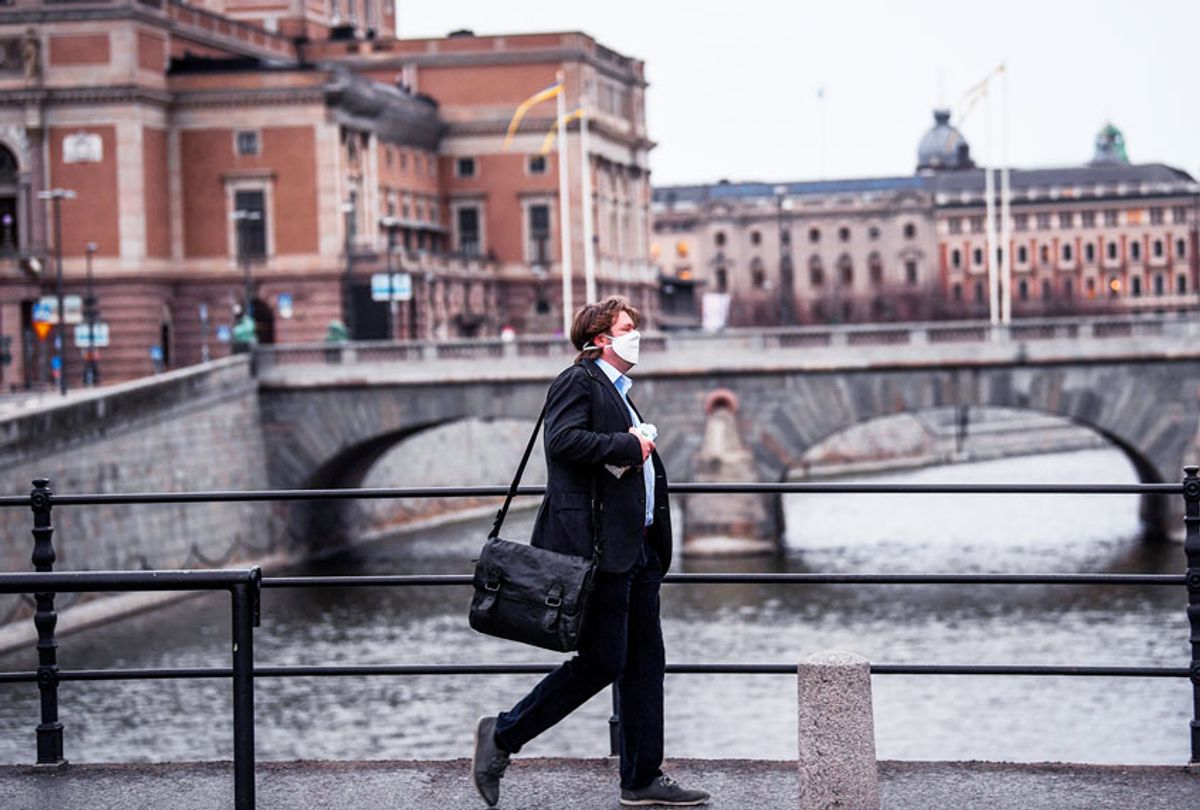 A man wearing a protective mask walk in the rain past the Royal Swedish Opera (at left) in Stockholm, Sweden (Getty Images)
--

Anders Tegnell, Sweden's chief epidemiologist, is defending his country's controversial decision to not go into lockdown — a decision which, many experts believe, greatly increased the loss of life in the Scandinavian nation during the coronavirus pandemic.

"There are things that we could have done better but in general I think that Sweden has chosen the right way," Tegnell told the Swedish newspaper Dagens Nyheter in a Wednesday interview. (Salon used a translation of the Swedish-language interview that was reported by CNN.)

Taking a laissez-faire approach to social distancing rules, Sweden allowed schools and popular areas of entertainment like restaurants, bars and salons to remain open during the pandemic and has not issued stay-at-home orders, in stark contrast to the neighboring Scandinavian countries of Denmark and Norway. According to Johns Hopkins University, there have been more than 40,000 confirmed coronavirus cases in that country, compared to just under 12,000 in Denmark and over 8,000 in Norway. More than 4,000 people have died in Sweden after developing COVID-19, the disease caused by the coronavirus, compared to 580 deaths in Denmark and 237 deaths in Norway; notably, the combined population of Denmark (5.8 million) and Norway (5.4 million) is about equal to the population of Sweden (10.23 million).

Tegnell also defended himself from the fact that there have been high death rates in care homes, telling Dagens Nyheter that Sweden's Public Health Agency "didn't know that there would be such a big potential for the disease to spread in elderly care homes, with so many deaths" and that "we knew that group was very fragile and that we would get a lot of deaths if they got infected. But we didn't know that the disease would enter so easily and for the spread to be so big."

Despite these problems, Tegnell insisted that the country's emphasis on social distancing "worked well" and that he did not believe they should have done things "in a completely different way."

Tegnell was most likely responding to comments he had made earlier on Swedish radio that seemed to acknowledge the failure of Sweden's policies.

"If we were to encounter the same disease, given exactly what we know about it today, I think we would reach a conclusion to act somewhere in between what Sweden did and what the rest of the world did," Tegnell said.

When anti-lockdown protesters took to the streets in the United States last month, many held up signs declaring "Be more like Sweden" as a way of arguing that America's lockdown policies were not necessary. In April, Sweden's foreign minister Ann Linde seemed to defend her country's policies in language echoing the American conservative movement's own criticisms of the lockdown. She argued that the country's public health agencies believe that "it's good for people to be outdoors, to have walks" and that "if you're locked inside there's risk of depression, domestic violence, alcohol abuse." She dismissed the support of American far right groups, however, claiming that it "doesn't mean much" and that Sweden is implementing its more lax policies "according to our tradition."

"We are sacrificing old people and people with diseases," Professor Olle Kampe, a senior consultant in endocrinology at the Karolinska Institute in Stockholm, told Business Insider last month about Sweden's approach. "So I don't [think] that it's something that anyone should copy."