A debate that will live in infamy: That sweaty, red-faced liar is actually our president

We already knew Trump was a national embarrassment. Did he think his sneering-bully act would win back voters? 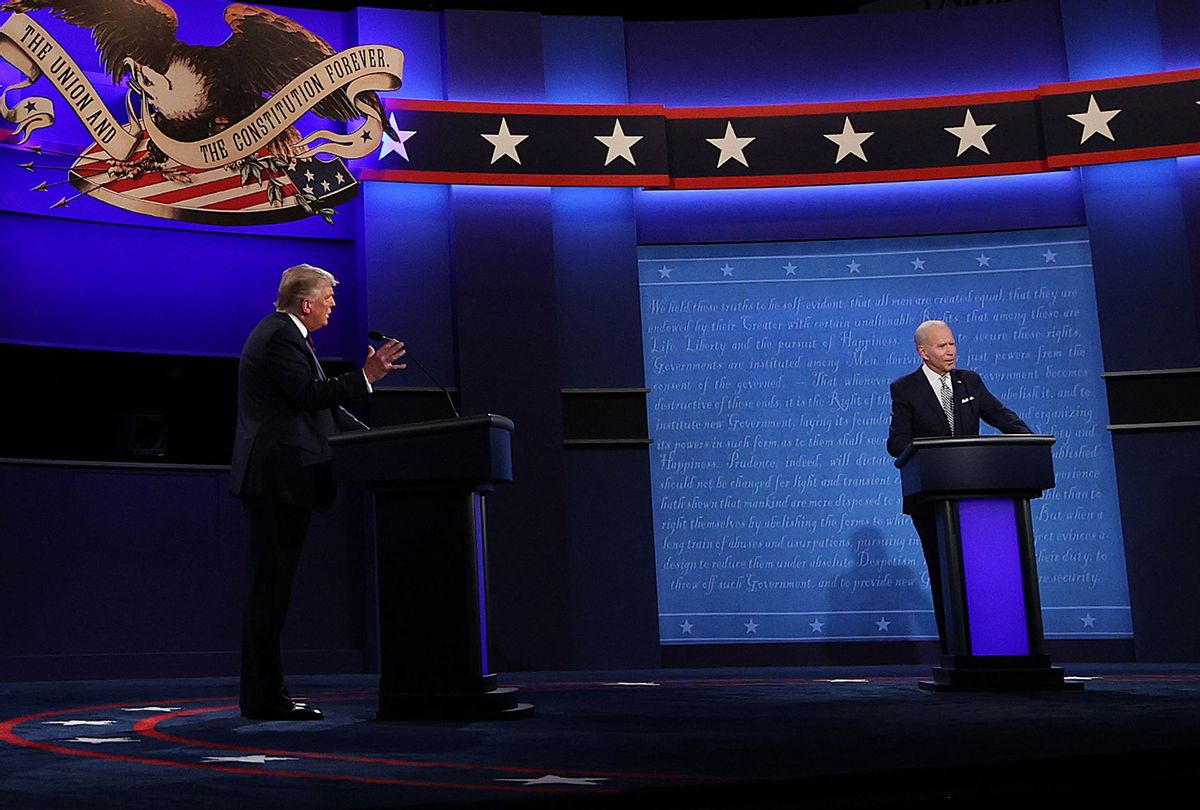 U.S. President Donald Trump and Democratic presidential nominee Joe Biden participate in the first presidential debate at the Health Education Campus of Case Western Reserve University on September 29, 2020 in Cleveland, Ohio. This is the first of three planned debates between the two candidates in the lead up to the election on November 3. (Win McNamee/Getty Images)
--

At the conclusion of the first debate between Donald Trump and Joe Biden on Tuesday night, CNN's Dana Bash gave the best review of the proceedings: "That was a sh**show." Her colleague Jake Tapper who described it as "a hot mess inside a dumpster fire inside a train wreck. That was the worst debate I have ever seen. In fact, it wasn't a debate. It was a disgrace. It's primarily because of President Trump, who spent the entire time interrupting [and] lying." Or maybe Rachel Maddow's assessment on MSNBC — a "monstrous cavalcade of increasingly wild and obscene lies" — draws the most accurate picture of what went down in Cleveland on Tuesday night.

However you want to phrase it, a great truth was expressed by Wolf Blitzer when he opened his show:

I'd like to welcome viewers from here and around the world. Clearly this debate was an embarrassment for the United States ...

I would only add that it was an embarrassment entirely because of Donald Trump's sophomoric behavior, which was more befitting a nasty tween bully trying to shake someone down for his lunch money than the president of the United States. But then, why would we expect otherwise? The Donald Trump whom millions of people watched in horror as he lied, insulted, interrupted and acted like a barbaric brute is who he is virtually every day at his briefings, press avails, interviews and, most especially, the grotesque super-spreader events he calls campaign rallies. To expect him to behave with the decorum befitting the leader of the most powerful country in the world is absurd. He simply doesn't know how.

To the extent that he has ever cared about attracting back some of those "suburban housewives," as he likes to call them, this debate was a massive failure. His sweaty face and angry grimace formed the surreal picture of every woman's worst nightmare — the domineering boss, the cruel boyfriend, the violent father, the abusive husband. He could not have done more to drive them away.

Biden was fine. He's never been a great debater but he held his own and managed to speak directly to the American people as much as possible over the cacophony of lies and fatuous insults. He told Trump to shut up, which would have been satisfying if Trump had actually done it but he just kept growling and grunting his way through one incoherent rant after the other. This was the Trump Show all the way, and a cheap and ugly display from beginning to end.

Unfortunately, the moderator, Fox News anchor Chris Wallace, was hapless throughout although I did feel some pity for him. Moderating a debate between a normal politician and an angry, petulant ignoramus isn't easy. Wallace lost control from the beginning and was never able to get it back. It was a low point for his career.

We heard that Trump had prepared a bit for the debate with former New Jersey Gov. Chris Christie and some flash cards and the notoriously short-tempered Jersey Boy must have worked him up into a frenzy. Christie himself must have had second thoughts because he reportedly said that he thought Trump "came in a little too hot," which was the understatement of a lifetime. Trump was completely unhinged.

His insults were off the charts. For instance, after Biden's criticized Trump's COVID response by saying, "A lot more people are going to die unless he gets a lot smarter a lot quicker," the president came unglued and snapped back:

Trump went on to spout an egregious lie from the right-wing fever swamps that Biden didn't know which college he went to. Coming from the man who had his former henchman, Michael Cohen, threaten his college officials if they released his transcripts, that's real chutzpah.

There was a lot of that sort of thing. But there were two occasions when Trump said things that were downright chilling. The discussion of "race and violence" (an unfortunate framing by Wallace, to say the least) was awful. From Trump saying that he canceled diversity training because it made "certain people feel as if they had no status in life — a sort of reversal" (meaning "reverse racism," a right-wing trope) to yet another refusal to disavow white supremacy, Trump's own racism was on full display.

When Trump asked who specifically he was supposed to disavow and Biden suggested the gang of far-right thugs known as the Proud Boys, Trump couldn't do it. Instead he issued a call to arms:

The Proud Boys heard the call:

That leads to the other issue that should give every American a few sleepless nights. Once again, Trump refused to say if he would agree to wait for the ballots to be counted, and did not promise to urge his supporters to stay calm:

As for "poll watchers," they are designated by local election officials. They're not just random citizens crowding into polling places to breathe down the necks of voters. That's called voter intimidation and it's illegal. Nonetheless, I'm sure the Proud Boys heard that call too, as well as any number of other MAGA-heads who are prepared to keep people from voting by any means necessary.

Trump perhaps thought he could behave like a rabid dog and make Biden cower in the corner — and at least that didn't happen. Biden was solid enough and Trump's antics were so over the top that the whole exercise ended up feeling like an assault on the whole system. James Fallows of the Atlantic put it this way:

[T]his was a disgusting moment for democracy. Donald Trump made it so, and Chris Wallace let him. I hope there are no more debates before this election. If they happen, I won't waste another minute of my life watching them.

It was exhausting and depressing, and I have to imagine that many viewers changed the channel after about 45 minutes of it. That spectacle was literally painful to watch at times because it reminded us how much our democracy has been degraded and demeaned by this man for four long years. Now he's openly calling for violence and intimidation around the election. He may end up finally leaving office at the end of this ordeal, but it appears that he's prepared to leave a smoldering ruin of a country in his wake.