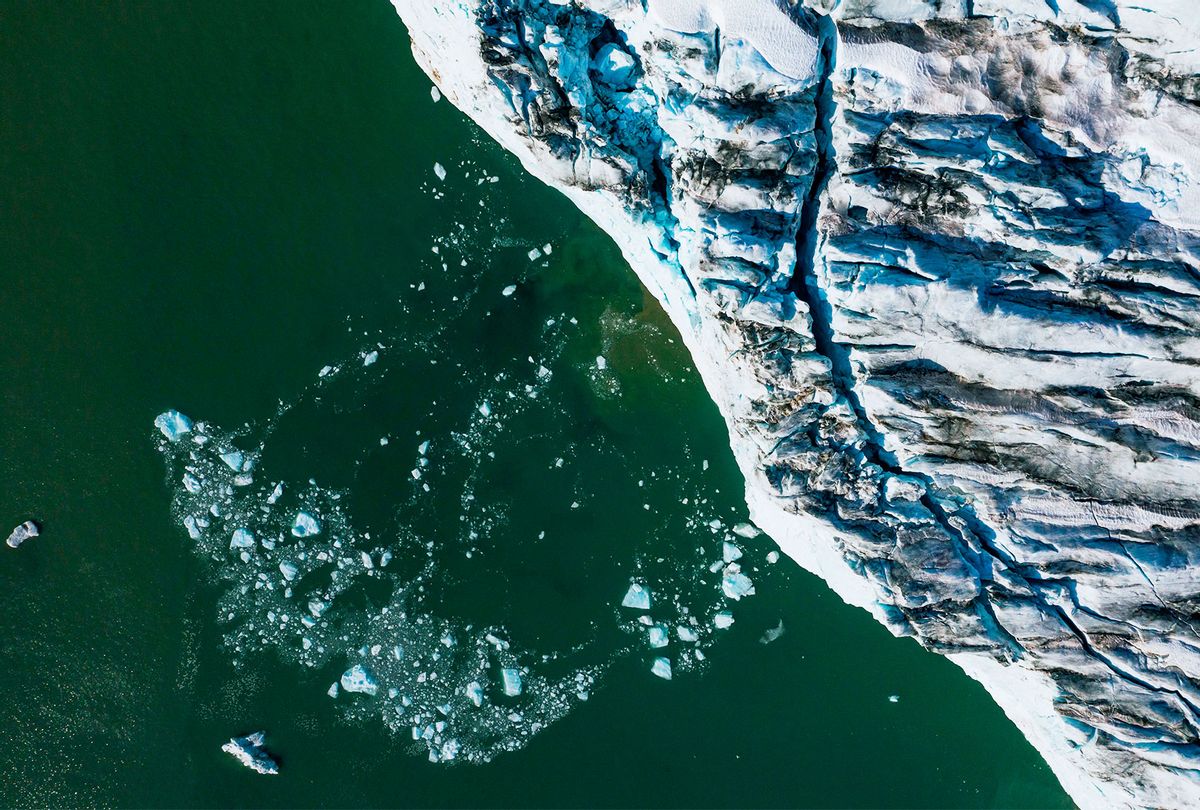 An aerial picture shows bergy bits and growlers floating in front of the Apusiajik glacier, near Kulusuk (aslo spelled Qulusuk), a settlement in the Sermersooq municipality located on the island of the same name on the southeastern shore of Greenland. (JONATHAN NACKSTRAND/AFP via Getty Images)
--

The ice sheet that covers most of Greenland, the world's largest island, is on pace to start melting faster than it has in the past 12,000 years. The rate of melting is so fast that one scientist told Salon the potential consequences could be analogous to those of the 2004 global warming-themed disaster movie, "The Day After Tomorrow."

The study — which was published in the scientific journal Nature and co-authored by researchers from the United States, Canada and Denmark — attempts to reconstruct the melting of the Greenland Ice Sheet (GIS) during the Holocene epoch, or the period of the last 11,700 years.

"Given the short-term nature of the observational record, it is difficult to assess the historical importance of this mass-loss trend," the authors explained. "Unlike records of greenhouse gas concentrations and global temperature, in which observations have been merged with palaeoclimate datasets, there are no comparably long records for rates of [Greenland Ice Sheet] mass change."

After studying the southwestern portion of Greenland Ice Sheet, the scientists predicted "mass loss of between 8,800 and 35,900 billion tonnes over the twenty-first century." They note that the rate of ice loss is higher than it has been at any point in the past 12,000 years.

"Our results indicate, with high confidence, that the rate of mass loss from the [Greenland Ice Sheet] will exceed Holocene rates this century," they wrote.

One likely consequence of this is that the global mean sea level will rise to dangerous levels. At the current rate at which it is melting, the Greenland Ice Sheet has contributed to a global sea level increase of 0.7 millimeters each year. If the scientists' models are correct, however, global mean sea level could increase by between 2 and 7 millimeters each year. As global sea levels rise, human populations that reside along coasts will become increasingly vulnerable to flooding and other extreme weather conditions. In the United States alone, almost 40 percent of the population lives in densely populated areas that could be endangered by rising sea levels, including major cities like Boston, New York, Baltimore and Miami. Worldwide, eight of the planet's 10 largest cities are near a coast.

Another problems with the accelerating melting of the Greenland Ice Sheet is the impact it will have on the Atlantic Meridional Overturning Circulation. The Atlantic Meridional Overturning Circulation is an ocean current that moves warm water from the tropic regions near the equator up to the north Atlantic, including much of western Europe. It forms a part of the larger circulation of water currents throughout the Earth's oceans, a phenomenon known colloquially as the Global Ocean Conveyer Belt and formally as thermohaline circulation.

The Atlantic Meridional Overturning Circulation moves warm, salty water north through the Atlantic Ocean.  The warmer water eventually begins to cool once it reaches the ocean near the United Kingdom, sinking to the bottom of the Labrador and Nordic Seas, settling to the ocean floor and flowing back to the Antarctic Southern Ocean. This system continues to move in what some scientists compare to a conveyor belt — and if it is slowed down or even halted entirely because of the infusion of melted icewater from Greenland, it could have unpredictable and disruptive consequences for humanity and the rest of life on Earth.

"That rate of Greenland melt is approaching or exceeding rates of melt during natural warming periods over the past 12,000 years is not surprising," Michael Mann, a professor of atmospheric science at Penn State University who did not participate in the study, told Salon by email. "It's what I would expect given the evidence we have already. This study however provides a better quantification of this matter using climate model simulations combined with long ice core records."

Mann added that he and Kevin Trenberth, who works for the National Center for Atmospheric Research at the University Corporation for Atmospheric Research, produced a recent study which "shows evidence of the freshening of the sub-polar North Atlantic that we would expect as Greenland continues to melt. That freshening is reducing the stratification of the ocean and likely slowing down the 'conveyor belt' ocean circulation (the real-world equivalent of the 'The Day After Tomorrow' scenario) showing how these potentially threshold like climate responses are potentially linked."

He concluded, "As I am fond of saying, uncertainty is not our friend. It's cutting against us, not in our favor, as we see and learn more."