"They want to kiss": Trump appears to blame troops and cops for spreading virus to his inner circle

"They want to hug you," Trump tells Fox News. "And they want to kiss you, because we really have done a good job" 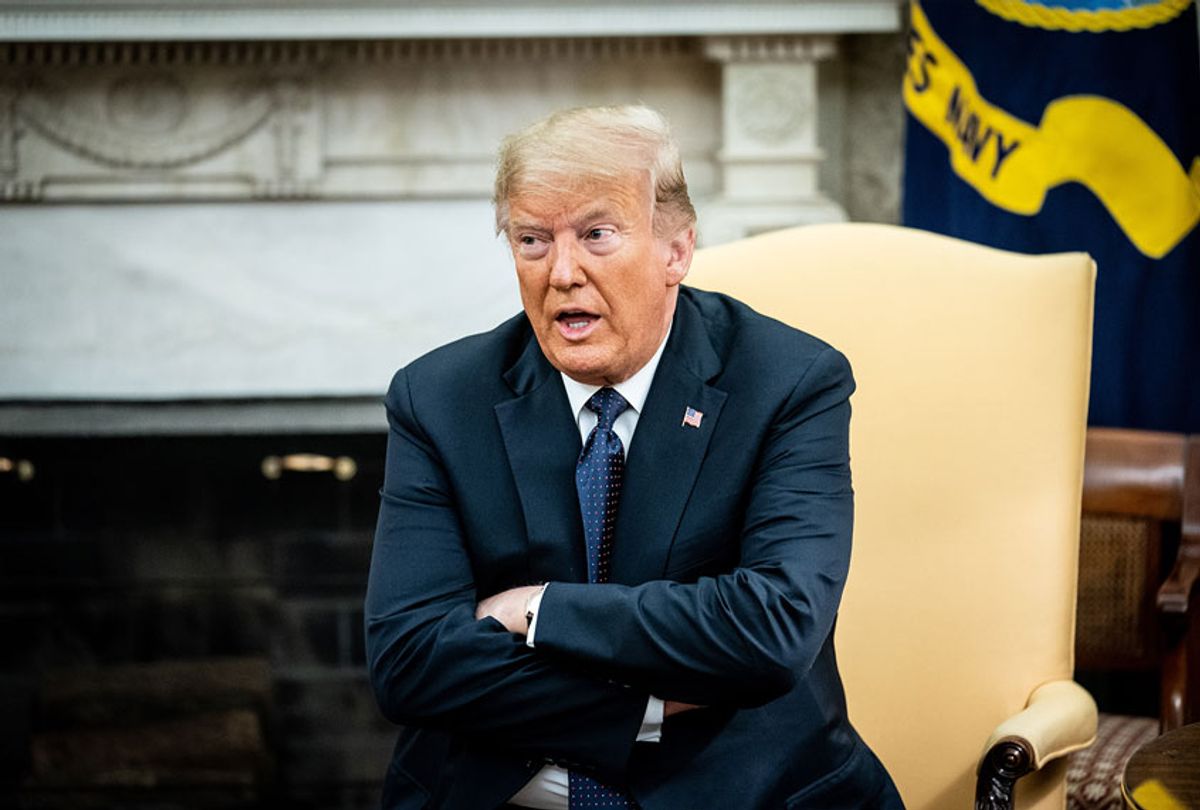 President Donald Trump appeared to blame members of the military and law enforcement units for spreading COVID-19 to his inner circle in a Thursday interview with Fox News host Sean Hannity when he claimed that uniformed officials often want to "hug" and "kiss" members of his team out of gratitude for the "good job" the administration has done.

Trump, who the White House at one point claimed was being checked "multiple" times a day for COVID-19, told Hannity that he would undergo testing following Hicks' positive diagnosis. The president later disclosed in an early-morning tweet on Friday that he and the first lady had both tested positive and would quarantine for 14 days. (The diagnosis revelation became Trump's most "liked" and shared tweet, according to the Agence France-Press, accruing more than 1.2 million likes within an eight-hour span.)

"I just went for a test, and we'll see what happens. I mean, who knows?" Trump said to Hannity. "But you know her very well. She's fantastic, and she's done a great job."

The president then returned to the topic of troops and police.

"But it's very, very hard when you are with people from the military or law enforcement, and they come over to you, and they want to hug you. And they want to kiss you, because we really have done a good job for them," Trump added. "And you get close, and things happen. I was surprised to hear, with Hope. But she's a very warm person with them, and she — she knows there's a risk, but she is young."

The Atlantic published a bombshell exposé in early September detailing disparaging comments Trump had allegedly made in private about members of the military who were killed in the line of duty. While Trump had made similar remarks publicly, he ridiculed the anonymously-source report as "disgrace" and "a fake story."

Both The New York Times and The Washington Post pointed out that Trump appeared to be blaming soldiers and police for spreading the disease to his team. The Post's Aaron Blake observed that Trump's remarks to Hannity were "an odd way" to account for Hicks' diagnosis.

"However much military members and law enforcement appreciate what the Trump White House has done for them, are they really going up to Trump's low-profile senior counselor, who rarely speaks publicly, to hug her and try to kiss her?" he wrote.

CNN fact-checker Daniel Dale has noted that Trump often relates unverified "tales about macho men breaking into tears of gratitude in his presence" who suspiciously call him "sir."

Earlier this week, Trump told a rally crowd that he had just met a construction worker who was teary with appreciation. He has, as Dale observed on Wednesday, told similar stories about a coal miner, a farmer, a steelworker and a man who looked "as big as a 'football player.'"

"The common feature of the character in these stories is that they are male, tough and large, and that, before crying upon meeting Trump in a setting with no independent witnesses, they have never cried before, can't remember crying before or only cried when they were a baby," Dale said.

Dale pointed out that Trump once gave a 2019 speech in which he said a number of "strong, tough" farmers, ranchers and construction workers had allegedly wept when they joined him at a 2017 executive order signing ceremony.

"Half of them were crying," he told the American Farm Bureau Federation, including one man who Trump said appeared so tough that he might not have cried even "when he was a baby."

The signing ceremony happened on camera. No one wept.