Dexamethasone, the COVID-19 drug Trump is taking, can cause delirium and hallucinations 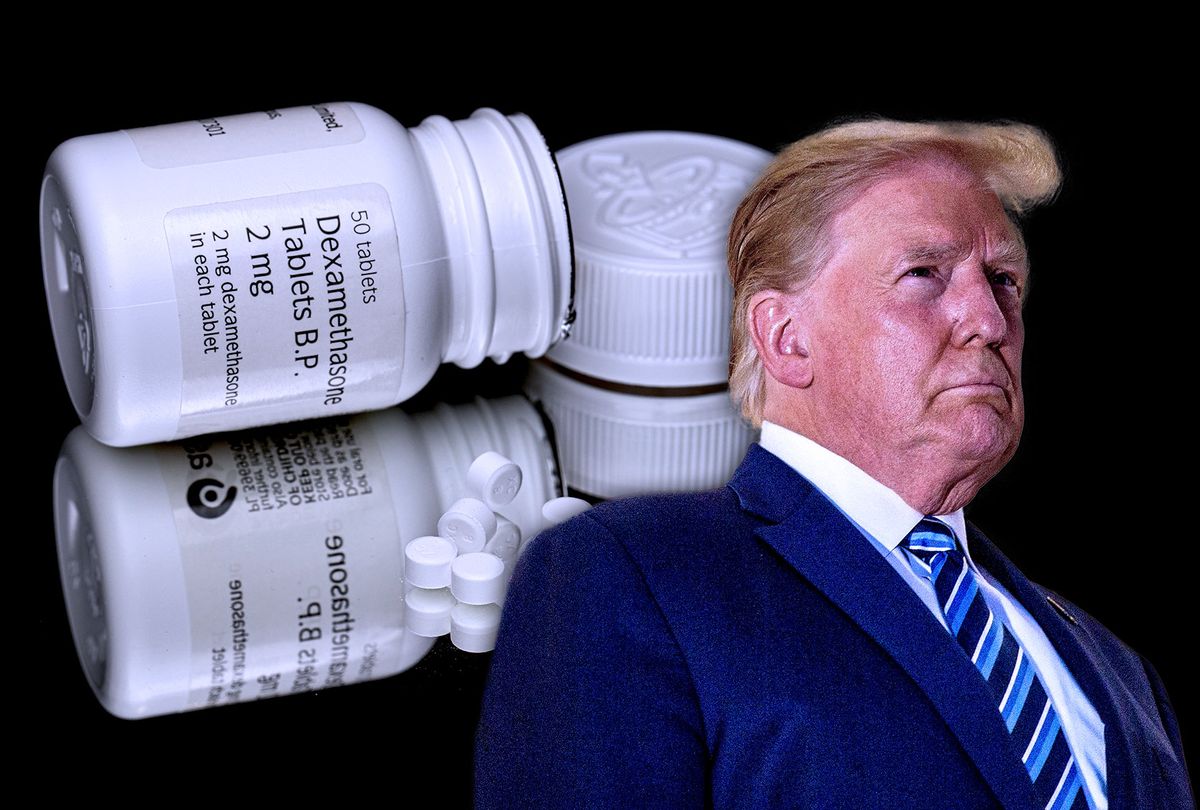 In order to help treat COVID-19, President Donald Trump is taking a steroid that can cause mood swings, confusion, depression, delirium and nervousness.

Though rare, WebMD reports that paranoia, delirium and hallucinations "tend to have a Severe expression" when exhibited by dexamethasone users.

Scrutiny over Trump's drug regimen increased yesterday after the president returned to the White House after being treated for COVID-19 in Walter Reed Medical Center. After returning to the White House, the president said he felt "better than (I) did 20 years ago." Earlier on Monday between and 6:47 AM and 7:14 AM Eastern Time, when he was still in the hospital, the president issued 16 tweet missives in all capital letters of varying degrees of comprehensibility.

The International Myeloma Foundation says that dexamethasone can lead to difficulty thinking and personality changes, according to Reuters. An infectious disease expert who spoke to the wire service, Dr. Edward Jones-Lopez of the University of Southern California in Los Angeles, said that "steroids are always very dangerous medications to use. That is why it (dexamethasone) is used in severe to critical patients... There can be neuropsychiatric side effects. These are medications that we use very, very carefully."

In addition to the potential psychological complications, there are also serious potential physical complications from using dexamethasone. Although the drug has reduced death rates by roughly one third among people with severe cases of COVID-19, it can also harm people who are not as sick by artificially suppressing their natural immune responses. Common physical side effects include infection, water retention and weight gain.

"Dexamethasone is only approved for patients with very severe disease mechanically ventilated in the hospital, so the President does not fit the criteria for dexamethasone by the statements coming from his doctors, and this drug can cause harm in more mild disease," Dr. Monica Gandhi, an infectious disease doctor and professor of medicine at the University of California–San Francisco, told Salon by email on Monday.

Gandhi also told Salon that there was a contradiction between the White House's rosy statements on Trump's health and the cocktail of medications he has received so far, which also include remdesivir and an experimental drug called REGN-COV2 from the biotechnology company Regeneron. Dexamethasone, for example, is prescribed for COVID-19 cases when doctors are concerned about severely lowered oxygen levels and need to stop a patient's immune system from fatally overreacting to the disease. Remdesivir is prescribed to patients to help them recover at a faster rate and REGN-COV2 is prescribed, according to Regeneron, "in patients who had not mounted their own effective immune response prior to treatment."

"The drugs the President got are not given to ordinary Americans, especially the antibody cocktail which has not been approved and is still under study," Gandhi wrote to Salon. "Similarly, a patient of his description would not be given medications for severe disease (Remdesivir, dexamethasone) since the steroids can be harmful and the anti-viral is of uncertain efficacy in that situation."

Because of Trump's age, weight and sex, he is at an advanced risk of terminal complications from COVID-19. One recent compilation of COVID-19 studies reported in Nature noted that among patients in their mid-seventies and older who tested positive for COVID-19, roughly 116 out of 1,000 (meaning 11.6%) wound up dying.