Like many US workers, Trump staff has little recourse if asked to work alongside sick colleagues

What do workers do when the person responsible for enforcing worker safety laws turns a blind eye to his own staff? 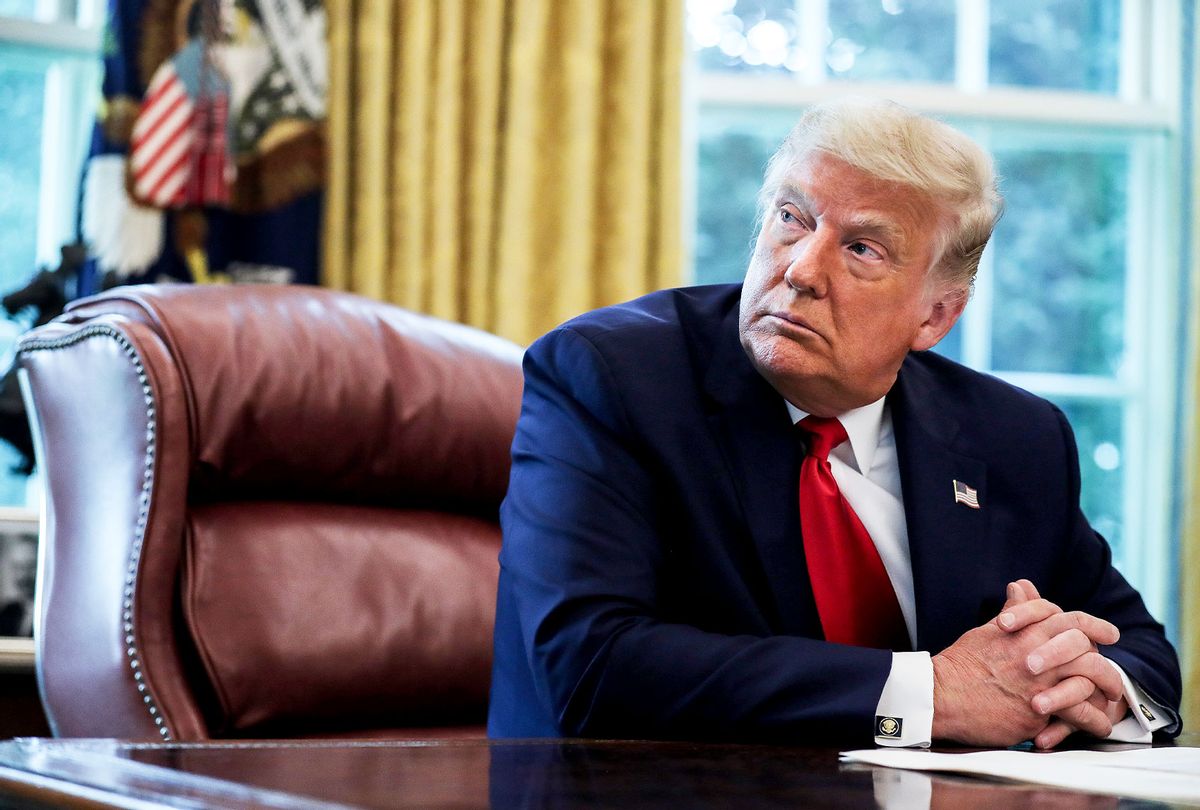 On Wednesday President Donald Trump's chief of staff announced that White House staffers who come into contact with the president, who has COVID-19, will wear masks, gowns, gloves and eye gear to protect themselves from getting infected with coronavirus. Still, that puts White House workers in an odd position, as their boss — the most powerful man in the country — is going to work sick. Meanwhile, workers who may have compromising immune conditions or merely don't wish to put themselves at risk are now expected to feel safe because of a little bit of PPE between them and a coronavirus-ridden boss who eschews mask-wearing.

The labor situation in the White House is not unique, as experts explained to Salon: many workers around the country who don't have the option of working from home are put in similar situations every day, where they may be expected to show up to work despite having sick colleagues or bosses, and there is little they can do about it. In June, for example, Tesla workers claimed they were fired after choosing to stay home to avoid getting COVID-19, even though they say they had initially been given permission to do so.

Ironically, the White House staffers who are stuck between a rock and a hard place have their boss to blame, as does the rest of the country. That's because the president has power to see that labor laws and labor safety regulations that might protect such workers are (or aren't) enforced, as experts explained to Salon — and this president has done little to make sure that ordinary Americans are similarly protected if their bosses want them to work in conditions that put them at risk of being infected with the novel coronavirus.

"Last summer, Trump ordered the meatpackers back into the meatpacking plants, using a law, while pointedly NOT imposing minimum health and safety standards on the meatpacking employers," Richard D. Wolff, professor emeritus of economics at the University of Massachusetts Amherst, told Salon by email. "Many teachers are being pressed back into schools that are risky; waiters and waitresses into indoor dining jobs, public service jobs (in transportation, health care, etc.) without adequate [personal protective equipment] provision[s]."

The case of meatpacking employees may end up being comparable to the situation in the White House. Sharon Block, the Executive Director of the Labor and Worklife Program at Harvard Law School, explained that workers at meatpacking plants "were told to continue to show up for work even as their coworkers were testing positive in high numbers and even dying." "As different as these workplaces may seem, the dynamic is similar — especially for the non-partisan staff in the White House, many of whom are people of color who are not highly paid. Because of the failures of the Trump Administration and their political objectives, workers' health and lives are needlessly being put at risk."

Catherine Fisk, a professor at University of California, Berkeley Law, noted that the Occupational Safety and Health Administration (OSHA), the watchdog agency responsible for enforcing safety standards in the workplace, fined two meatpacking companies that failed to protect their workers after several died of COVID-19.

So could the White House be fined by OSHA in a similar manner if it does not properly protect its staffers from their infected boss?

That may not happen because of a catch-22, which Fisk noted. Namely, Trump himself is responsible for enforcing existing laws meant to protect workers from unsafe conditions like those that could lead to them to contracting coronavirus in the workplace.

"Enforcement of workplace safety laws is notoriously weak, even in the case of employers that do not have the power of the President of the United States," Fisk wrote to Salon. "Given the way that coronavirus risks have been politicized, it's not surprising that enforcement agencies such as OSHA may feel themselves powerless to protect West Wing workers from exposure to the virus by the president."

"Under the Occupational Safety and Health Act, employees in the United States have a right to refuse to work when they reasonably fear serious injury or death," Benjamin Sachs, a professor of labor and history at Harvard Law School, told Salon by email. "In my view, COVID-19 presents such a threat, especially in a work environment when employees are being asked not to wear protective gear. Unfortunately, the Trump Administration's Occupational Safety and Health Administration has proven time and again that it will not stand up for workers. That's why workers need new leadership at OSHA and across government."

"I'm sure you are hearing from many labor and employment law experts that the Occupational Health and Safety Act is the primary law that should be protecting workers, like White House staff, from being forced to go to a workplace where they are in danger of being exposed to COVID-19," Block wrote to Salon. "While it isn't legal for employers to force workers to expose themselves to serious risks to their health or lives, that protection is dependent on the willingness of the Administration to enforce the law and this Administration has failed to do so."

Specifically the Occupational Health and Safety Act focuses on protecting workers from contexts in which they might be placed in "imminent danger." Debbie Berkowitz, the Worker Health & Safety Program Director at the National Employment Law Project, wrote to Salon that the Occupational Safety and Health Administration has already decided that it "does not consider exposure to COVID 19 to be an imminent danger."

The Trump administration has previously seemed to have an inconsistent approach toward applying safety protocols within the White House. Trump himself has previously downplayed the importance of wearing a mask, denigrated other people who do so and refused to wear one himself. As of Tuesday a number of Trump staffers and other people from his inner circle have been diagnosed with COVID-19, including First Lady Melania Trump, campaign manager Bill Stepien, press secretary Kayleigh McEnany, senior advisers Stephen Miller and Hope Hicks and various other staffers.

Despite claiming to have only exhibited mild COVID-19 symptoms, Trump was treated during his stay at Walter Reed National Military Medical Center in Washington, D.C. from Friday through Monday, to an aggressive medication regimen including the steroid dexamethasone, the antiviral drug remdesivir and an experimental monoclonal antibody treatment called REGN-COV2 from the biotechnology company Regeneron, one that is not yet available to the public — and which his staffers, should they become ill, would be unlikely to be able to access.

Salon spoke with experts earlier this week who agreed that a patient who is prescribed these types of drugs is usually much sicker than the Trump White House has admitted, although it is also possible that the doctors are acting out of an abundance of caution.

Likewise, experts say that, because Trump first reported being sick last week, it is likely that he is still highly infectious.

"When you get exposed, the incubation periods for the virus is about 14 days," Dr. Russell Medford, Chairman of the Center for Global Health Innovation and Global Health Crisis Coordination Center, told Salon on Tuesday. "That's why we have the 14 day quarantine period, the median time it takes to actually show symptoms after being exposed, where the virus has to grow and develop a sufficient concentration to develops symptoms. It's about four to five days to symptoms onset. So if you're infected, roughly four to five days from that infection is when you start developing symptoms."

The bottom line is that, while employers have an ethical and legal responsibility to protect their workers, it is up to the government to make sure those laws are enforced. This applies to everyone from meatpackers and Tesla workers to service staff at the White House.