"The View" hosts mock Trump for being too "scared" to debate: "Wheel him in with a straitjacket"

"Why don’t they just wheel him in with a straitjacket and zap him every time he lies? That would be a debate!" 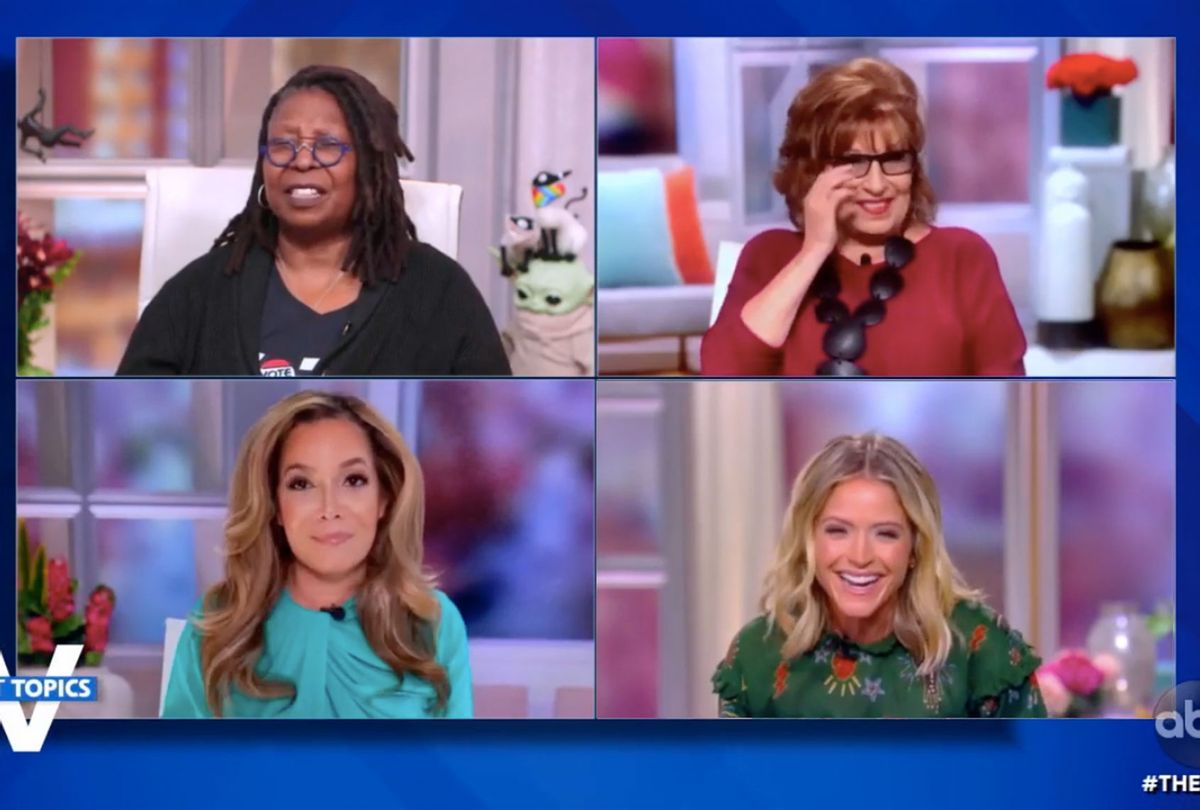 The ladies of The View laughing (ABC)
--

Co-hosts of "The View" couldn't help but laugh at President Donald Trump for being too afraid to debate former Vice President Joe Biden for a second time.

"I beat him in the first debate," Trump told Fox Business. "At the second debate, we have a never Trumper as a host, but that's okay because I beat him in the second debate also. So, I'm not going to do a virtual debate. I'm not going to waste my time on a virtual debate. That's not what debating is all about. Sit behind a computer and do a debate. that's ridiculous, and then they catch you off whenever they want."

Host Whoopi Goldberg was confused and had to fact-check that there wasn't a second debate and she wasn't sure what Trump was talking about.

"He is scared, Whoopi, he's scared," said co-host Joy Behar. "He's scared to do another one because he lost so badly in the last one, and he knows it. He may not be able to read, but he can count, and the numbers plummeted after that debate because there were people out there who don't follow the news the way we do constantly, but they were watching that debate, and they saw how crazy he is. Why don't they just wheel him in with a straitjacket and zap him every time he lies? That would be a debate to watch."

"I mean, it really would be helpful to him because he is losing nationally across the board in the swing states and just nationally," said Sunny Hostin. "He's behind between 10 and 12 points, but I think Joy is right. I think he is scared to debate Joe Biden. Trump lost the first debate. Listen to that phone call. He sounds congested. He sounds sick, and we don't know what the timeline is because the White House won't confirm when he last tested negative for COVID, but we all know that he is currently carrying a contagious — a very contagious virus. He has COVID-19, and I don't think he should get anywhere near Joe Biden, you know, with those contagious droplets that we know very well travel by air. It's airborne with — by aerosol, and so it just seems to me the reason that he is willing — the fact that he is willing rather, to actually go into a debate hall face to face just shows how he continues to be so reckless with his diagnosis, and I think he also said that rather than debate, Whoopi, he was going to hold a rally? Again, showing how reckless and deranged he is behaving."

Goldberg noted that the steroids are likely the cause. She suffered from a severe case of pneumonia a few years ago, though she didn't say whether she was on that same drug. She did explain that the "bravado" is the roid-rage talking.