In working while sick, Trump embodies the most toxic aspect of American work culture 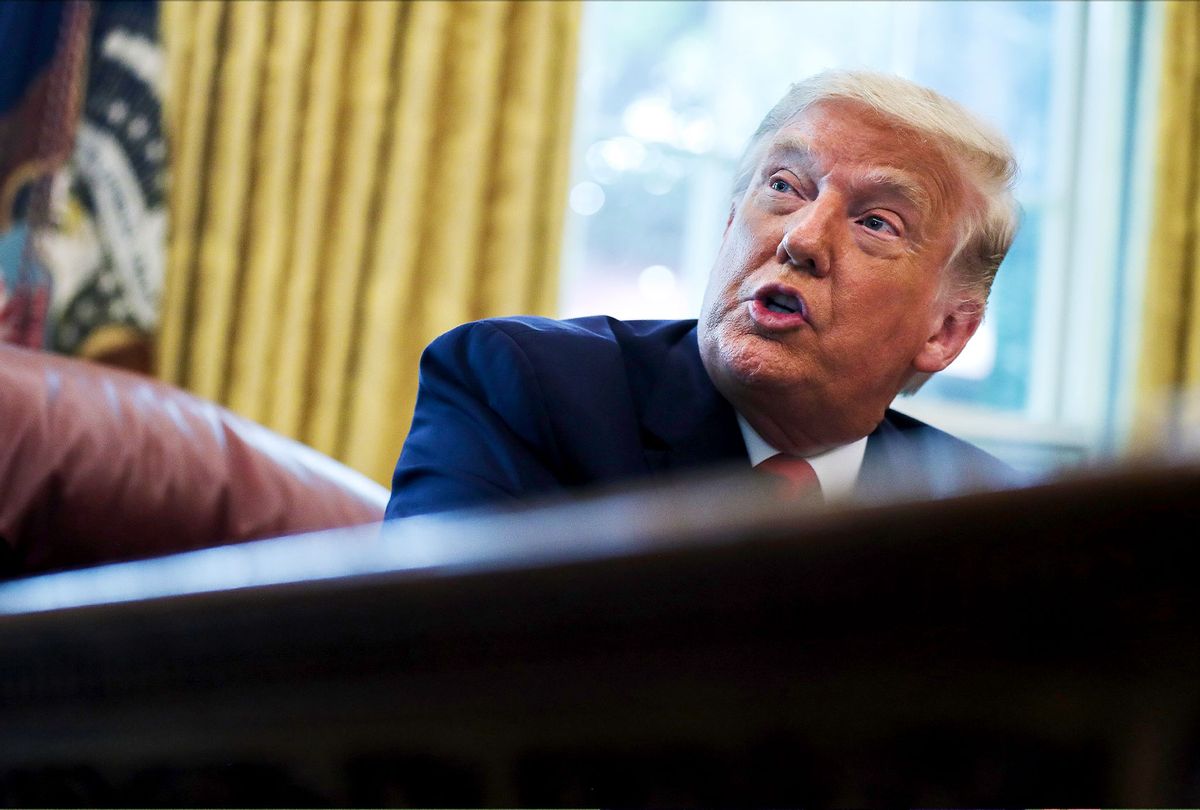 Since Donald Trump has tested positive for COVID-19, he's gone above and beyond to make it known that he's still working, even in the throes of illness.

In the first announcement of Trump's diagnosis, his physician Sean Conley said that he expected Trump to still carry out his duties "without disruption."  When the White House announced that he would be moved to Walter Reed hospital, the statement said that he would be "working from the presidential offices at Walter Reed for the next few days." Most importantly, Trump returned to the White House to keep working while still contagious, based on the public timeline of his infection: News broke that Trump got COVID-19 on Friday October 2, and returned to the White House on Monday, October 5. According to the Centers for Disease Control and Prevention, people with COVID-19 can stop isolating and be around others 10 days after they first showed symptoms.

Meanwhile, Trump's re-election campaign has tried to frame Trump as a "warrior"  and "fighter," casting his purported triumph over the virus — and his insistence on defying medical recommendations and appearing to work through his illness — as symbolic of his masculinity and strength.

The promotion of this message is deeply harmful, and apt to put lives at risk among Americans who mimic his behavior. Indeed, nobody who insists on putting coworkers' health at risk as part of some kind of masculine display is a "warrior" or "fighter." Indeed, there is nothing weak about taking care of oneself.

Trump's power-through everything attitude, even a deadly virus that has put the country to a halt and killed  211,000 Americans to date, is the exact embodiment of the most toxic aspect of American work culture: the notion that work comes first — above one's own health, and above the health of one's peers.

"We have a lot of room for progress in this area where it's acceptable to honor your health and the health of your family members with days off, and we just aren't there as a culture," Leanne DeRigne, an associate professor at Florida Atlantic University whose research focuses on labor participation and healthcare policies, told Salon. "We have never in our corporate workplace life offered everybody guaranteed access to paid sick leave in this country — so without that, of course people have to work when they're sick, they have to lie about why they need a day off."

In October 2019, Robert Half published results from a survey showing that nine out of 10 employees go to work sick. According to the survey, more than half of those who go to work sick said they go when they have a flu or cold because they have too much work on their plate. Another 40 percent, in the survey, said they go to work while ill because they don't want to use up their sick time. In 2014, the public health and safety nonprofit NSF International found that 26 percent of American workers regularly go to work when sick.

"Bosses should set an example by taking time off when they're under the weather, encouraging employees to do the same and offering those with minor ailments the ability to work from home," Michael Steinitz, senior executive director of Accountemps, said in a statement at the time.

But this work-first, health-second attitude appears to be something Americans learn at a young age, partly as a result of the lack of universal paid sick leave. I recall being sick with the flu in first grade, and my mom— a single mom at the time — was not able to miss work. As a result, I had to go to school. Two hours later, the office called her and asked her to pick me up because I was so sick. We laugh about it today, acknowledging that I should never have gone to school in the first place that day; but as a working, single mother, taking time off wasn't an easy choice for her to make.

Certainly for someone like Trump, who has the privilege of to take time off, it is a terrible example to set for the millions of Americans who don't. But in typical Trump fashion, the move to appear "strong" while having COVID-19 and continue working is just as much political as it is cultural. Back in 2016, Bill Clinton took Hillary Clinton's place at a couple campaign events as she recovered from pneumonia. Some media outlets made sexist comparisons to her being sick, and implied her campaign was failing. Trump's campaign used images of her coughing in an attack ad to try to fuel conspiracy theories about her health and make her look "weak."

"We saw this during the last presidential campaign that Hillary was viewed as weak when she took a day off from work... I imagine that's influencing his decision to keep working," DeRigne said. She noted that there is something cultural about Trump's attitude, too.

That would be the Calvinist work ethic, which is still very much alive today. It's this attitude that places immense value on the idea that hard work, discipline, and frugality are a result of a person's values and essence. In the early 1900s, author Max Weber said this mindset in part is responsible for the birth of capitalism.

"We've attached work as a moral activity, and we've never really felt great about people who don't work so that's a category of people of people we deem as 'unworthy,'" DeRigne said. "Then we have this very patriarchal society that has viewed a woman's place, historically, just being in the home, so I mean they're both a play here for sure."

This is counterproductive to having a (literally) healthy labor sector, DeRigne explained. First, there is no doubt that the pandemic has disproportionately impacted the careers of American women, which is partly due to this bootstraps mentality.

"This attitude definitely doesn't allow you to take care of yourself fully, so you're always committed to your employer," DeRigne said. "How you manage your caregiving responsibilities, if you have children or older people in your life, you know that's very hard to balance those two competing demands on time and commitment."

And then there's the issue around the nature of the coronavirus itself. According to the Institute for Women's Policy Research, during the 2009 H1N1 pandemic nearly 8 million infected American workers took no time off.  The Institute for Women's Policy Research estimates that these workers in turn infected another seven million people. If the United States has any hope of containing and eradicating the coronavirus, workers must stay home and isolate themselves while they're sick.

Of course, this is more difficult and detrimental to hourly wage workers, particularly those who don't have sick pay, or who have been conditioned to fear the repercussions of taking a day off to heal.

"Taking a day off when you're a salaried employee is easier for people to do and for employers to accept that you're doing, than if you're an hourly wage worker," DeRigne rued.