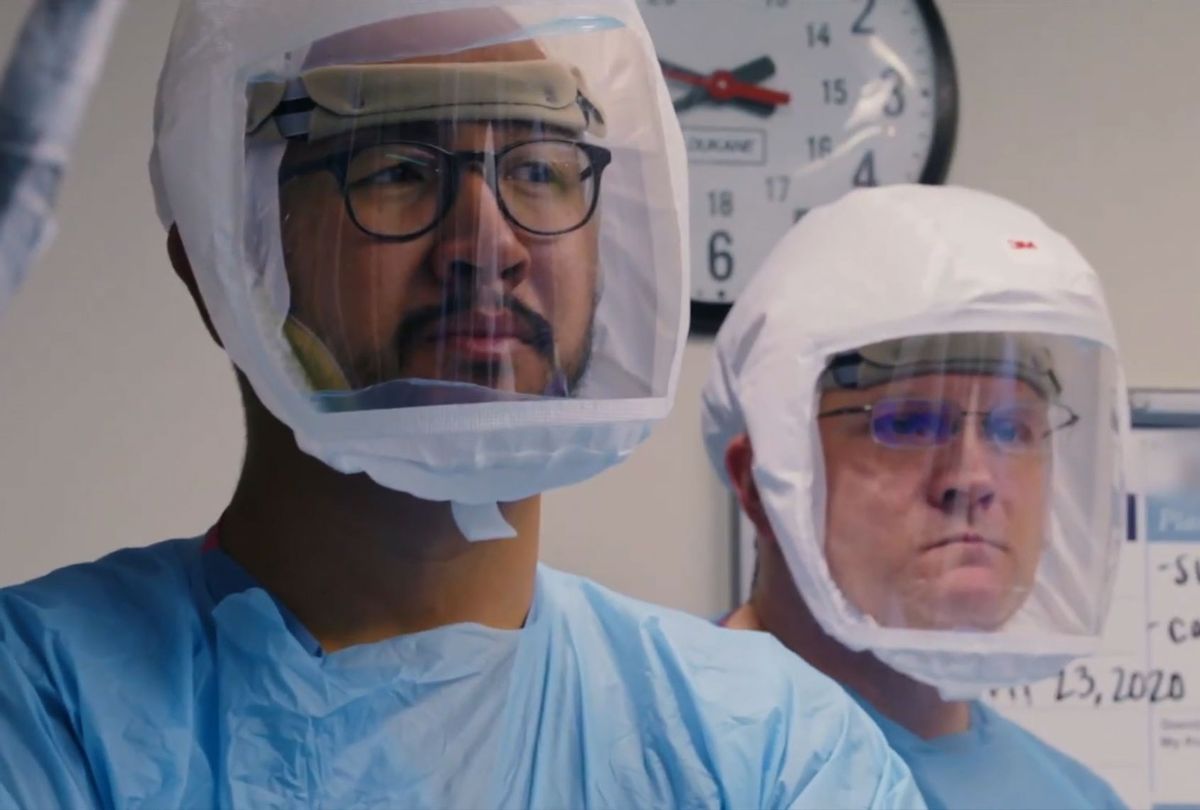 Over the last four years, Donald Trump's administration has kept fact checkers and truth-seekers several levels occupied. Those who aren't actively correcting his statements busily dig for precedent or corroborating evidence to prove their take on reality isn't simply yanked out of thin air, that it is accurately represented.

Such a task shouldn't be difficult. But "Totally Under Control" shows how needlessly tough it is under an administration that has pitted science against politics and the economy, and for experts with extensive backgrounds on pandemic response against Trump loyalists more eager to remain in the president's good graces than to curb the spread of a pandemic he'd rather would simply disappear, like magic.

"Totally Under Control" is a 123-minute indictment of the Trump administration's disastrous mishandling of this pandemic, which is exactly what a person expects from an Alex Gibney documentary. No fan of this administration, Gibney has had an especially prolific 365 days thanks to this administration's bungling; this is his third Trump-related documentary released since last November, after "Citizen K," and HBO's "Agents of Chaos."

Understandably, Gibney could direct this project alone, especially given that he decided it needed to be made in April, "in the middle of the New York sh*tshow," according to the film's press notes. Demonstrating this are the recurring instances of perspective shots taken from behind the interview subjects, showing them speaking to a small screen surrounded by extensive plastic sheeting, behind which a camera operator is lurking.

There's a touch of levity in those glimpses; more than this, however, it calls attention to the obscenity of this new normal.

Works born in the midst of crises and times of high anxiety risk becoming victims of the creator's frustrations, but Gibney and his co-directors Suzanne Hillinger and Ophelia Harutyunyan sidestep those pitfalls.

By carefully walking the viewer through the pandemic's timeline from the emergence of the novel coronavirus that causes COVID-19 to the most recent headline-grabbing developments, it reconstructs recent history to remind us of how recently and quickly this pandemic changed life as we know it. Simultaneously, it calls attention to the many missed opportunities officials could have seized that may have altered the course we're on, and the inexcusable idiocy behind decisions such as contradicting expert recommendations that people wear masks in public.

Somehow ignoring scientific advice became an act of patriotism, the film observes. That misguided fervor will take more than a regime change to undo.

"Totally Under Control" moves with a variation of the anxious urgency that drives "Agents of Chaos" owing to its connection to the here and now. Just as that film dives into Russian interference with the 2016 elections and was released weeks before the 2020 edition, the final frame of "Totally Under Control" confirms how close to release the three filmmakers had to update the production.

It simply a text card that reads, "One day after the completion of this film, President Donald Trump revealed that he had tested positive for COVID-19."

In light of the two hours' prosecution that spells out this administration's spectacular bungling of its response to this pandemic, those word should have an air of poetic justice to them. But they don't because we're still living with the effects of that failure. "Totally Under Control" simply adds the doleful confirmation that all this could have been avoided if not for Trump's narcissism and ego, his and his cronies' zealous belief in the myth of American exceptionalism and his administration's purposeful dismantling of any plans or structures informed by expertise.

Mind you, despite their even-keeled strategy in taking on this story, "Totally Under Control" is far from a dispassionate film. Nearly every scientific or medical expert who agreed to sit for an interview has at least one point in their testimony where they are at the very least at a loss for words.

Rick Bright, who was removed from his position with the Biomedical Advanced Research and Development Authority (BARDA) after going to the press with what he knew about this administration's intentional misleading the public regarding hydroxychloroquine, nearly breaks down in tears as he's retracing the steps that led to his decision to effectively garrote his government career for the sake of protecting the public.

"It's not easy to come forward in this administration, OK?" he says, adding, "It was a very hard process to lay our careers on the line to push back" against the Food and Drug Administration's insistence upon rushing the treatment to consumers at the White House's insistence and despite any evidence of its effectiveness.

But this is an appropriate response when placed in context of the documentary's central question: Why did the United States fail to reckon with a danger for which it should have been so well prepared?

The answers are exasperating – and to the credit of Gibney, Harutyunyan and Hillinger ( who worked on the FX docuseries "The Weekly") the blame doesn't entirely fall on this administration. Just most of it.

"Totally Under Control" explains why the federal stockpiles of protective medical equipment should have been adequately supplied under Barack Obama's administration but, unfortunately, were not. As with all past presidencies, military spending was prioritized over preventative allocations for other departments, including those tasked with pandemic preparedness.

As with any film of this sort, much of "Totally Under Control" is in effect a replay of the news that's come before that takes time to highlight aspects of the pandemic narrative that likely escaped our attention or might have been underreported.

One alarming testimonial comes from  Max Kennedy, the grandson of Robert F. Kennedy who volunteered to assist the White House COVID-19 Supply-Chain team headed up by Jared Kushner. Kennedy assumed he would be providing auxiliary support to a team of experts, only to discover that he was part of a 10-person crew of 20-year-old volunteers "all just with private laptops, nobody with any industry relationships, no experience working in supply chain" Googling mask manufacturers online and contacting them through their personal email accounts.

He left in mid-April, as the pandemic was ravaging Manhattan and state governors were bidding against each other  – and the federal government itself – to secure PPE for its own state medical facilities and frontline workers.

"My takeaway was really that I still feel that I haven't worked for the government," Kennedy says. "We were so far outside of it. I mean, we were . . . every single person that we reported to up the chain of command was a political appointee. The number of FEMA employees I met, I could count on one hand, and they were fleeting interactions. It taught me about how this administration works, and it seemed to work in this case outside of the government."

This makes "Totally Under Control" a case study of how this administration works against the interests of the public and for the enrichment of corporate entities and the personal financial portfolios of everyone involved. And if the professionals here can't hide their aggravation or befuddlement at the administration's criminal inability to refrain from politicizing a deadly virus, no sane and feeling viewer can blame them.

We've reached a point in this presidency's lifespan at which the public surely must be numb to so many accounts of willful negligence and mishandling of issues that impact the entirety of the American population – the economy, the environment, systemic injustice and now, the public's  health.

Within the last four years, Trump has inspired more than 1,200 books about his life and his governing methods, positive and negative. A count of every special report, hour-long news special and documentary such as this would eclipse that number by a wide margin.

"Totally Under Control" serves as a record of Trump's dereliction of his duty to protect the American people that's also a testament to the efforts of the respected and accredited medical professionals who have done their best to step into the void he's left.

"There's a misconception that public health failed. The truth is that political leaders failed to follow public health guidance, and that's what caused avoidable disease, death and economic destruction," said Dr. Tom Frieden, the former director of the CDC.

Frieden and other medical professionals aren't sharing such opinions out of vindictiveness but rather, dismay, anger and sorrow. For people like Dr. Taison Bell, the COVID-19 ICU Director at UVA Medical Center who sounded the alarm regarding the pandemic's disproportionately heavy toll on communities of color, testifying isn't merely a matter of satisfying one's conscience. He's doing it, he says, because in every case he sees his own family and the risks they face.

When he reads names of people who fell sick or died of COVID-related illnesses, he says he sees "smiles and hugs and tears and barbecues. They're not numbers on a paper."

"Totally Under Control" is currently available on demand and premieres on Hulu on Tuesday, Oct. 20.