"Good old days for who?": Harrison rebukes Graham for invoking the "good old days of segregation"

Graham, a vocal Trump supporter, is running against the first Black man to lead the South Carolina Democratic Party 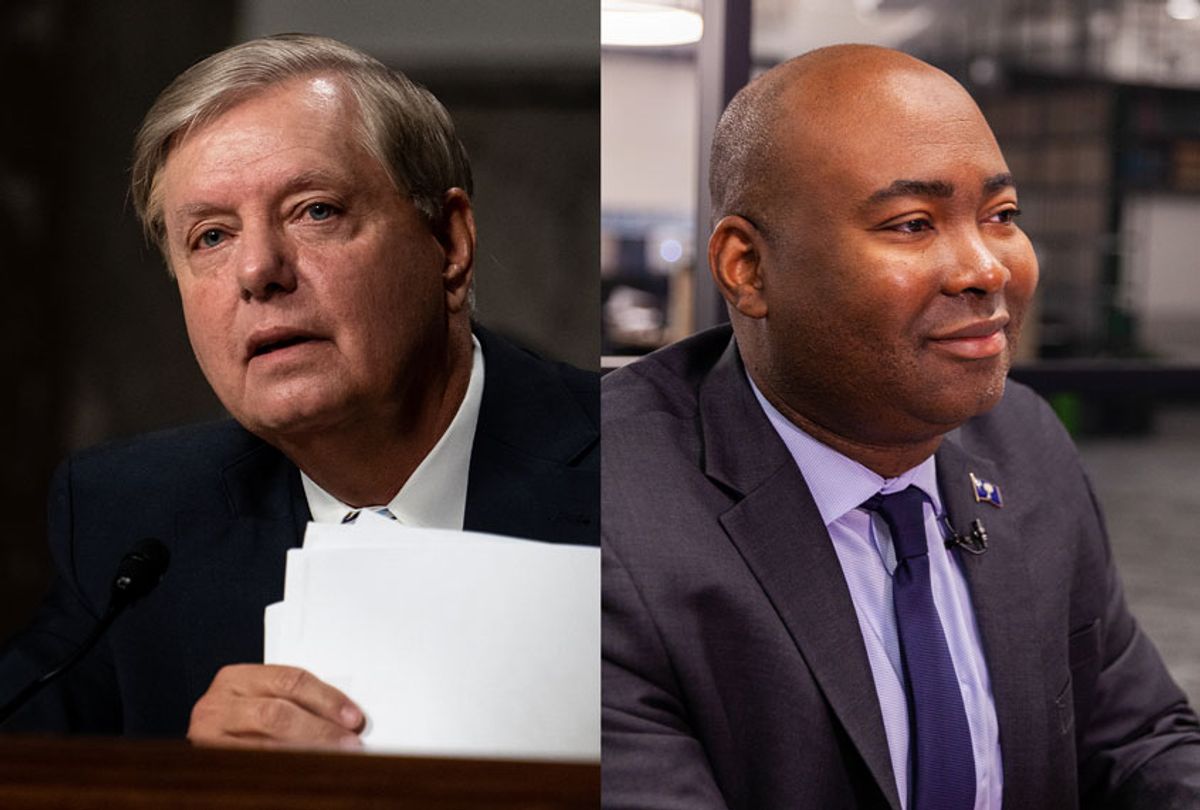 Graham, the chair of the Senate Judiciary Committee and a vocal supporter of President Donald Trump, began another day of hearings by defending Barrett's refusal to address a number of critical issues from the previous day.

"One of the reasons you can't tell us how you would rule is because there's active litigation coming to the court," Graham said. "And one of the reasons you can say with confidence that you think Brown v. Board of Education is super-precedent is that you're not aware of any effort to go back to the good old days of segregation by a legislative body. Is that correct?"

"That is correct," Barrett responded. "I've also said in lectures that Brown was correct as an original matter, and that is the kind of thing — since I've said that in writing  — that I can say before the committee."

The previous day Barrett resisted answering questions from Sen. Chris Coons, D-Conn., about the Affordable Care Act, citing in part the fact that she had written about it in her capacity as an academic.

Graham later followed up a series of questions about decisions legalizing same-sex marriage by questioning whether the issue of polygamy would wind up before the high court.

"Is there any constitutional right to a polygamous relationship?" Graham asked.

"That might be a question that could be litigated," Barrett replied. "Polygamy, obviously in many places, is illegal now. But that could be an issue somebody might litigate before the court at some point."

"Somebody could make that argument, yes," Barrett replied.

Conservative justices had raised the same question while weighing the landmark Obergefell v. Hodges decision, which legalized same-sex marriage across the nation. Chief Justice John Roberts, in his dissent, pointed out that some of the reasons the majority gave in support of same-sex marriage "would apply with equal force to the claim of a fundamental right to plural marriage."

Roberts wrote: "Although the majority randomly inserts the adjective 'two' in various places, it offers no reason at all why the two-person element of the core definition of marriage may be preserved while the man-woman element may not. Indeed, from the standpoint of history and tradition, a leap from opposite-sex marriage to same-sex marriage is much greater than one from a two-person union to plural unions, which have deep roots in some cultures around the world."

The LGBTQ advocacy group Lambda Legal reminded Graham and the Republican-backed judges that marriage equality is not equivalent to polygamy following the suggestion of as much.

Graham, whose troubled re-election bid is locked in a dead heat with Democratic challenger Jaime Harrison, the first Black man to lead the South Carolina Democratic Party, immediately faced backlash for both remarks.

Adrienne Lawrence, an attorney and the first on-air ESPN personality to sue the network for sexual harassment, pointed out that while Barrett had answered Graham's polygamy hypothetical, she had declined the previous day to say whether the president had the authority to delay the election.

And Harrison, who has so far been relatively silent on the issue of race, took the opportunity to punch back by tweeting, "[Graham] just called segregation 'the good old days.' The good old days for who, Senator?"

At a debate forum last week, Graham said, "If you're a young African-American or an immigrant, you can go anywhere in this country. You just need to be conservative — not liberal."

If Harrison defeats Graham, South Carolina — whose secession kicked off the Civil War — would become the first state in U.S. history to send two Black senators to Washington at the same time. Harrison would join sitting Sen. Tim Scott, a Republican.