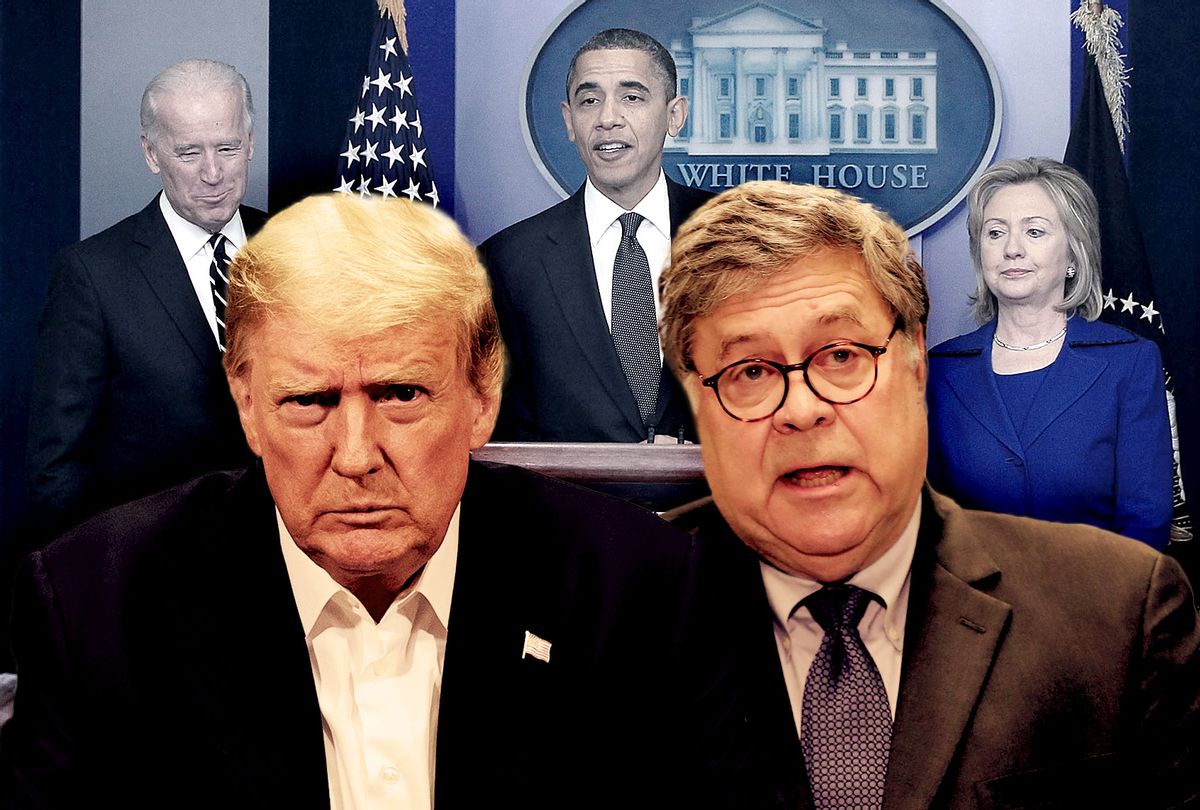 Despite days of a seemingly steroid-addled Donald Trump raving about alleged conspiracies against him on Twitter and to any right wing pundit who would listen, it appears Attorney General Bill Barr — usually so indulgent of Trump's various crimes and corrupt schemes — has decided not to arrest a slate of Trump's political opponents on falsified charges.

"'Unmasking' probe commissioned by Barr concludes without charges or any public report," blares the headline at the Washington Post. With that, another of Trump's hopes that he could abuse his powers to manufacture an "October surprise" to save his re-election goes up in smoke.

At this point, it's tempting to offer an explainer about what the supposed "unmasking" scandal is all about, but the problem here is that the whole thing is equal parts opaque and confusing, even for those who are fully immersed in the Fox News Cinematic Universe. It's a bunch of gobbledygook accusations against Obama White House staff, including former Vice President Joe Biden, that amount to nothing but have been sold at length with great umbrage by the over-acting crowd at Fox News.

The whole thing is confusing by design. These falsified scandals concocted by Republicans to smear Democrats — Clinton's emails, Benghazi, Whitewater, whatever the hell Trump and Rudy Giuliani have been trying to imply about Biden and Ukraine — are deliberately dense and confusing, so that no one, not even the most avid Fox News fan, can ever fully understand what they're supposed to be outraged by.

The hope is that viewers will tune out the details (because they are indecipherable) and instead simply hear a series of sinister (or foreign-sounding!) buzzwords — "Benghazi," "emails," "unmasking," "Burisma" — and assume that something bad must have happened, even if they don't understand what. It's a strategy that's been pretty successful for Republicans in the past. To this day, no one can explain what was supposedly so bad about Hillary Clinton's emails, but enough Americans assumed that all the smoke must mean fire that they held the fake scandal against her at the polls in 2016.

Barr quite clearly opened the "investigation" into this non-scandal in order to pile on more confusing news reports and bolster the illusion that something bad must have happened. Barr likely understood that this phony investigation, like others, would amount to nothing substantive.

And it wasn't really meant to. The whole point is to drag out the Potemkin investigation until the election, creating a fake and confusing "scandal" that wannabe Trump voters could cling to in order to rationalize voting again for the racist disease vector polluting the Oval Office.

But Trump, who doesn't understand the art of subtlety on a good day, got greedy. Trump has been in an obvious downward spiral, brought on by both his humiliating COVID-19 hospitalization and the likely side effects of the powerful drugs he was given to battle it. Unsurprisingly then he's given a number of incoherent and aggrieved interviews to right wing outlets while also venting regularly on Twitter. In the process, he began screeching demands that Barr arrest a whole slew of Democratic figures on false charges in wild, over-the-top language that frankly removed all plausible deniability that there was anything substantive about the investigation.

"DO SOMETHING ABOUT THIS, THE BIGGEST OF ALL POLITICAL SCANDALS (IN HISTORY)!!! BIDEN, OBAMA AND CROOKED HILLARY LED THIS TREASONOUS PLOT!!! BIDEN SHOULDN'T BE ALLOWED TO RUN - GOT CAUGHT!!!" Trump tweeted in what looks quite a bit like a 'roid rage spiral last Wednesday.

The next morning, he appeared on Fox Business to rant at Maria Bartiromo about how this fake scandal is "the greatest political crime in the history of our country" and demanded that Barr arrest and indict Obama, Biden and Hillary Clinton.

Concocting a fake scandal to smear Democrats requires some amount of restraint. Republican officials can't just arrest Democrats willy-nilly on false charges that will get thrown out immediately in court. That's likely to blow back in their faces, as the scandal becomes about abuse of power and turns the innocent people arrested — all of whom are very famous! — into martyrs.

No, the strategy — which has worked really well! — has been to use federal resources to run a bunch of phony "investigations" that create the illusion of scandal, all without crossing the line into illegal activity that could result in actual consequences for corrupt Republicans.

But Trump, especially when he's hyped up on steroids and humiliation, couldn't help himself. He's the same guy who bragged that he likes to commit sexual assault because "when you're a star, they let you do it." He lives to cross lines and test boundaries. He's also hobbled by impulsive and short-term thinking, and couldn't see past how powerful he would feel by arresting these people to see how an abuse of power scandal would only damage him.

Trump gave the game away. Any effort to pretend this "unmasking" investigation was legitimate was now pointless in the face of the angry old psychopath raving about how people who oppose him politically should be arrested.

It's impossible to read Barr's mind and conclusively determine if he decided to wrap up this phony investigation — and allow a bunch of Trump-damaging headlines about it — because of Trump's downward spiral and very public demands that Barr cross the line into blatantly illegal behavior. But it's hard to deny the timing here.

This is just the latest in the long list of schemes by Trump to abuse his federal powers to cheat in the 2020 election. Last week, Greg Sargent of the Washington Post listed all the failed conspiracies, from Trump trying to fake a Biden-Ukraine scandal to Trump tear-gassing innocent protesters to Trump trying to rush a COVID-19 vaccine for October to this new effort to levy fake "unmasking" accusations against Democrats. Trump has definitely spent more time abusing his office to cheat in the 2020 election than he has on governing in the past four years. But he's about as good at conducting corrupt conspiracies as he was at running his business, which is to say, not at all.

All that said, it would be unwise for anyone to relax just yet. Trump has made his intentions to steal the election quite clear, and while he may be incompetent, he does have plenty of competent people working for him. The conspiracy to steal the election by attacking the mail-in voting system is still up and running. It is still critical that everyone do their part to keep Trump from monkeying with vote-counting in an attempt to steal the election.

Still, watching Trump's latest scheme implode is a good sign. He's very bad at rat-f*cking and keeps getting in the way of the people who actually know how to pull such shenanigans off. He is not the criminal mastermind so many people have convinced themselves he must be, but an incompetent fool who got really lucky in 2016. He can be defeated — as long as people don't get complacent.