Trump has a plan to steal the election — in fact, he has a bunch of them 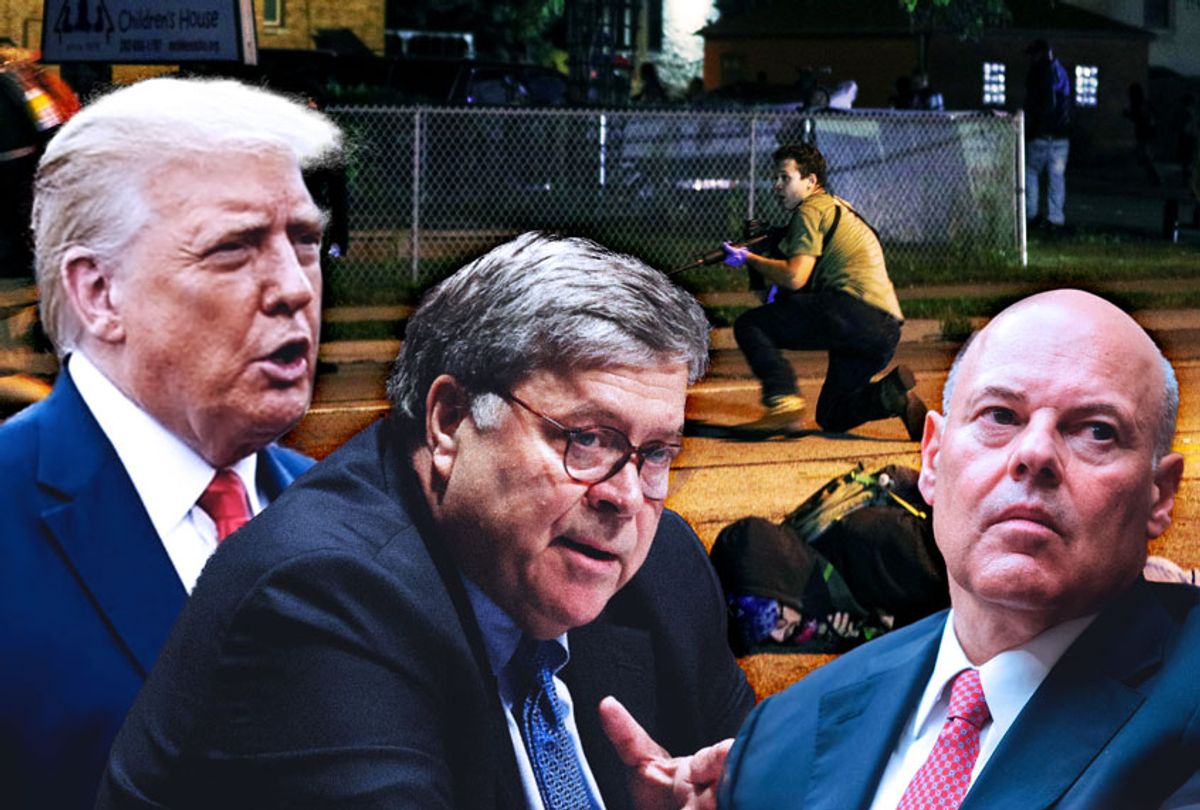 Donald Trump knows he is unlikely to win a fair election in 2020. But his strategies to cheat are so numerous and scattershot — did you catch that story about how acting Homeland Security Secretary Chad Wolf blocked a report about Russian propaganda? — that it's tempting to take comfort in the hope that he has no overarching strategy to fake or steal a second term.

In truth, however, the sheer number of schemes in play is all the more reason to worry, because it shows Trump's team is flexible and capable of adapting to changing circumstances. Worse yet, it shows they have a number of fallback plans. If one effort fails, then another effort might just work. Attacking our democracy on multiple fronts depletes the resources (time, money, energy) of their opponents, making it likelier that one effort will break through and be successful.

There is good news, however. A combination of Trump's big mouth, the continued courage of whistleblowers and the fact that Republicans have to conduct a lot of their scheming through the media means that, with two months to go, Trump's plans to distort, subvert or flat-out steal the election have come into view. Democrats, and anyone else who still believes in democracy, can avoid being caught flat-footed. What's required is to take all this seriously, instead of hiding behind increasingly foolish hopes that it can't happen here.

Because folks inevitably object to any proposal that Trump is scheming, on the grounds that he's too dumb to pull any such thing off, let's just get this out of the way: Trump doesn't need to be smart. He just needs to surround himself with smart but immoral people. There's significant evidence he has done just that.

After months of reading reports on Trump's various schemes to steal the election, I've outlined below roughly how I think they see this playing out, both on the legal and political fronts. This isn't to scare readers, it's to help us all be better prepared to fight back.

1. Keep as many Democrats as possible from voting in the first place.

Unfortunately, this is the strategy that will likely be most effective, as it builds on years of Republican voter suppression tactics that predate Trump and don't depend on him. For example Georgia has reportedly purged 200,000 voters off the rolls by claiming they had moved when they likely had not.

Still, Trump has put his own spin on it by exploiting the coronavirus crisis that he caused through a combination of negligence and open malice. Huge numbers of Americans, especially Democrats, plan to vote by mail and Trump clearly plans to keep them from doing it, aided by Postmaster General (and Trump mega-donor) Louis DeJoy, who took the helm of the Postal Service over the summer and immediately got busy slowing down the mail. Republicans are also fighting a legal battle to keep states from implementing measures that make mail-in voting more efficient.

2. Declare victory on Election Day before final results are tallied.

Trump has made public statements arguing that the winner should be declared on the night of Nov. 3, even though it's far more likely that the election can't be called for at least a few days, until the mail-in ballots have been counted. Democrats reasonably believe, therefore, that Trump, perhaps aided by Fox News, will declare victory before the votes are counted. Having established his claim to "victory," which will snag the headlines, Trump will then paint efforts to get all votes counted as usurpation by Joe Biden and the Democrats.

3. Disqualify as many mail-in ballots as possible.

Trump has been on a media war to stoke the idea that mail-in ballots are "fraudulent," even going so far as to tell his own voters to vote twice, once by mail and again in person, implying this will "prove" that mail-in ballots are frauds. Now Attorney General Bill Barr is joining in, shamelessly lying to both journalists and the House Judiciary Committee about "fraud" being rampant with mail-in voting. (It's not.)

Likely building on the legal precedent set by the Supreme Court in 2000, which declared George W. Bush to declare victory without a full and fair vote recount in Florida, Trump and Barr will likely pull as many legal shenanigans as they can to get as many mail-in ballots as possible thrown out in the days after the election. With the courts stacked with Republican appointees — and specifically Trump appointees — there's a real danger that many of these legal challenges will work.

It's not a mystery why Trump, Fox News and the White House are fashioning Kyle Rittenhouse — a 17-year-old charged with a double homicide for shooting anti-racism protesters in Kenosha, Wisconsin — into a hero. It's to encourage other Trump supporters to take up arms and join up with militia groups that are being hastily organized on social media. Right now these gangs of armed right-wingers are focused on intimidating Black Lives Matter protesters and getting into street fights with leftists, but once they're established, their attentions can be easily redirected to other goals by Trump through tweets and other public statements.

That's a useful tool for Trump to have if, for instance, he decides it's necessary to keep election officials in swing districts from finishing a count of mail-in ballots. If that sounds outrageous, note that Trump's friend Roger Stone — recently released from prison after Trump commuted his sentence — used exactly this tactic with the infamous "Brooks Brothers riots" used to stop vote counting in Miami in the 2000 election. That time it was done without guns, but now Trump's goons have normalized the idea of "protesting" by brandishing weapons.

There's also good reason to be concerned about right-wing militias being used to suppress pro-democracy protests that will likely break out if and when Trump declares himself the winner and starts the legal maneuvers aimed at keeping all votes from being counted..

5. If all else fails, reject the election results by declaring the election "rigged" and refuse to leave office.

The good news is that this strategy is the least likely to work, because the Constitution is quite clear on the timeline and methodology for the Electoral College to convene and to declare a new president. If the votes are counted and Biden is the winner, there is not much Trump can do, in terms of legal dirty tricks, to keep the Electoral College from doing its job. Furthermore, the Constitution is clear that Trump's term ends at noon Eastern time on Jan. 20, and whoever has been duly elected becomes president, with or without a Supreme Court justice administering the oath amid all the pomp and circumstance. (If there is no duly elected president or vice president on Jan. 20, the speaker of the House would become president. I think it's safe to assume Republicans would prefer President Biden to that scenario.)

The bad news is that, by the time all that happens, Trump and Fox News will likely have whipped Republican voters into such a frenzy over the "rigged" election that they may well conclude violence is justified to keep their man in office.

If that seems implausible, well, the reality is that most Republican voters have already embraced this fascist viewpoint, as Eric Levitz of New York magazine detailed in a disturbing article this week.

A YouGov poll taken in January 2020 shows that a majority of Republican voters agree that the "traditional American way of life is disappearing so fast that we may have to use force to save it" and only 22% were willing to disagree. Similarly, 41% believed that "a time will come when patriotic Americans have to take the law into their own hands" and only 22% disagreed. The rest were "unsure," which likely means they will either softly support such violence or at least will do nothing to stop it.

That's all very depressing, and I won't try to put a positive spin on it just to make anyone feel better. To quote Michelle Obama, "It is what it is."

None of this is a reason to give into despair and quit fighting, however. On the contrary, one massive advantage that those who still believe in democracy have is that now we know what Trump, who loves to run his mouth, is planning.

Democrats seem cognizant of the problem. Biden has repeatedly said that he believes Trump plans to steal the election, and House Speaker Nancy Pelosi has indicated that she knows it will be a struggle to get Trump to accept electoral defeat. During the Democratic National Convention, multiple speakers emphasized the importance of voting early, to forestall Trump's efforts to steal the election.

Whether or not Democrats have a plan to respond to all these possible scenarios is still obscure. We can hope that means that, unlike Trump, they're not tipping their hands publicly about what they intend to do.

It's going to be a long two months. But at least we know, roughly but with a pretty high degree of confidence, how Trump and his allies see this playing out. Now it's on the rest of us to stop it from happening.