Republicans try to blame pre-election mail slowdowns on anyone else, but the buck stops with this Trump toady 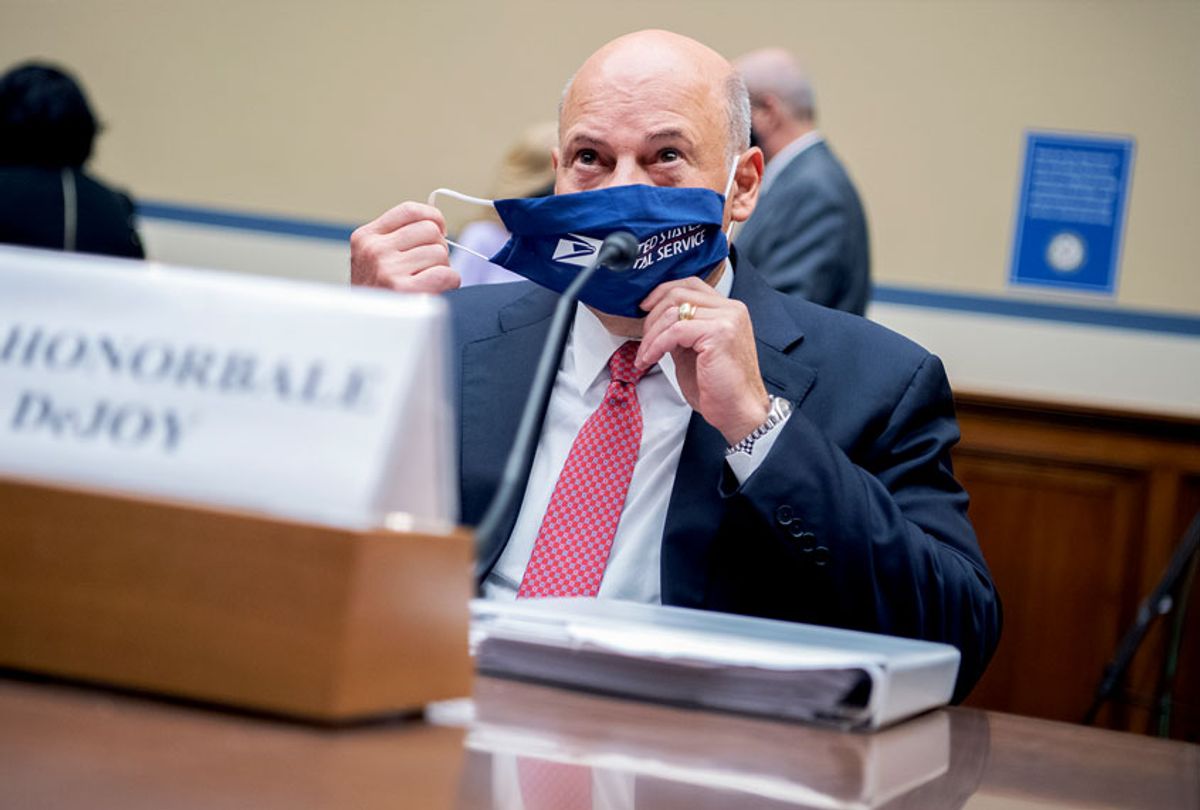 During Monday's House Oversight Committee hearing on the dramatic slowdowns of the U.S. Postal Service under the leadership of Postmaster General Louis DeJoy, a major donor to Donald Trump who continues to have tight relationships to the Trump campaign, Republicans worked two contradictory claims.

The first claim is that DeJoy is a major expert in logistics and that's why he was appointed as postmaster general — not because he was useful to the Trump campaign's efforts to sabotage mail-in voting.

The second claim is that Democrats are being unreasonable in expecting that DeJoy, this supposed expert on the mechanics of delivering stuff, should make sure the mail arrives on time, as it generally did before he was hired.

Republicans had a litany of excuses for why DeJoy cannot be expected to accomplish the baseline goal of getting the mail delivered, even though he was supposedly appointed because of his deep knowledge of such things. GOP members of the committee blamed "anarchists" for supposedly slowing down the mail with "riots," even though the mail slowdowns started in July, nearly a month after most of the unrest in American cities had died down. Republicans insinuated that postal workers are lazy and not showing up to work, even though, in reality, USPS employees are saying they're prepared to work overtime to deliver the mail and are being denied the opportunity. They even shamelessly blamed the pandemic, which they otherwise like to pretend is not a serious problem, even though the pandemic was at its most severe in the spring, but the mail slowdowns really started in the summer, after DeJoy took over as postmaster general in mid-June.

Democrats, who run the Oversight Committee thanks to their overall House majority, had quite a simple and compelling story about what's going on at the post office: It was working fine until DeJoy took over. Now it's falling apart, either because of DeJoy's incompetence, or — as many Democrats on the committee suggested — because DeJoy is deliberately slowing down the mail in order to help Trump subvert an election in which most Americans are likely to vote by mail.

On that front, the evidence is overwhelming, starting with this graph shared by committee chair Rep. Carolyn Maloney, D.-N.Y., who used it to demand answers from DeJoy. His response was to glower and blink and stumble his way to saying that it's "unfair" to hold him accountable for the performance of an agency he's running.

These cold charts back up reporting from around the country about the horrors caused by slowed down mail: Boxes of dead chicks delivered to farmers, days too late. Packages of rotten food swarming with insects and rats, piling up at post offices. Americans facing severe health problems because their medications don't arrive on time.

The question, of course, is whether or not this disaster is being deliberately caused in order to help Trump undermine or rig the election. Slowed-down mail delivery could mean untold numbers of ballots, possibly in the millions, being rejected for arriving too late. A Washington Post report shows that already, half a million primary ballots have been tossed out for that reason, and that's in elections that only see a fraction of the number of voters expected in November.

DeJoy spent the hearing alternately claiming that his drastic changes to postal delivery that led to these delays were done in the name of "efficiency" and not to help Trump steal the election, and foisting as much blame as possible on unnamed underlings. He also feigned outrage every time a Democrat asked him about his obvious desire to make sure Trump is re-elected.

But there's no reason to have much confidence in DeJoy's honesty, and not just because of the company he keeps as a man firmly embedded in Trump's political circles. And not even because of his belligerent, snarling attitude throughout the hearing, radiating the contempt for congressional oversight and the public good common to all Trump cronies.

On Friday, during a Senate hearing hastily arranged by the Republicans who control that body, in order to get a Trump-positive message out before the House got a crack at him, DeJoy claimed that he had "never eliminated overtime" at the post office and that overtime has "not been curtailed by me or the leadership team."

But as documents provided to Salon on Friday show, that simply wasn't true. USPS employees received an internal memo declaring that the "new PMG" — that would be DeJoy — had instructed regional managers to eliminate paid overtime throughout the agency. This comports with reporting in the Washington Post a few weeks ago.

During Friday's Senate hearing, a number of Republicans harped on the fact that DeJoy hasn't been in his position long, implying that he can't be responsible for the service delays because of his short tenure. In fact, the timeline tells the opposite story, as Maloney demonstrated with her chart: Delays started shortly after DeJoy started implementing his drastic "reforms," such as disconnecting mail-sorting machines, eliminating overtime, and putting drivers under onerous timelines that have led to trucks going out without being fully loaded with mail.

More to the point, DeJoy was hired right around the time that Trump started ramping up his attacks on mail-in voting. Trump started declaring that mail-in voting led to "FRAUD" and resisting efforts to make mail-in voting easier shortly after the pandemic reached the U.S. and numerous states began to move toward voting by mail in order to protect public health. Trump's campaign has since waged an all-out legal war, suing state after state in hopes of making it harder for people to receive, fill out and deliver mail-in ballots in a reasonable timeframe. During April and May, while Trump was tweeting and ranting to reporters about the evils of mail-in voting, Treasury Secretary Steve Mnuchin was pushing for DeJoy's appointment.

There is not a lot of wiggle room here: Trump and his Treasury secretary worked to install a Trump toady as postmaster general at literally the same time that Trump was waging a larger war against mail-in voting. And as soon as that toady assumed his post, he took measures whose immediate effect was to slow down the mail, putting the ability of people to vote in a timely fashion in grave jeopardy. And while DeJoy had made a big deal out of announcing that he would halt the changes until after Election Day, the reality — as he confirmed during the hearing, is that he has no intention of undoing the changes he's already made, meaning that it's mail delivery will stay sluggish right through the election.

DeJoy's repeated efforts to act offended at the implication that he has unsavory motives here are especially ridiculous. Consider that the Trump campaign blatantly colluded with a Russian conspiracy to interfere in the 2016 election, and has already made a number of efforts to cheat in 2020 as well. Some of those efforts are legal, such as the lawsuits aimed at making it harder for people to vote by mail, but those have been largely unsuccessful. At least one of those attempted cheats was likely a crime: Trump's effort to blackmail the Ukrainian president into publicly smearing Joe Biden. As you may recall, Trump was impeached for that one and only got away with it because Senate Republicans covered for him, as they're also doing now.

Oh yeah, and Trump has also confessed on live TV that he views post office slowdowns as a way to prevent mail-in voting, which he has also said will hurt him and Republicans in general.

DeJoy supported Trump throughout previous cheating efforts, so it's stupid to play this game of claiming that any suggestion of a sinister plot is preposterous, and that DeJoy is clearly a person of conscience who respects free and fair elections.

The only real question now is what can be done. DeJoy's scowling performance on Monday did little to dissuade fears that he's deliberately undermining the post office, either partially or entirely for the purpose of helping Trump steal the election. It also suggested he has no intention of changing course, since he has refused to let postal workers reinstall the 671 mail-sorting machines that have been disabled since he took office. And there's no chance that the bill to inject $25 billion back into the Postal Service, which was passed by House Democrats over the weekend, will become law.

But this hearing, with DeJoy playing the role of the glowering villain, could help Democrats reinforce the message that they were pushing during their last week: Vote as early as you can and, if possible, personally deliver your ballot to a drop box or election office instead of entrusting it to the post office. If word gets out widely enough, Democrats may be able to keep Trump from stealing this election by slowing down the mail. But counting on the postmaster general to do the right thing is clearly off the table.