In PBS' "Feels Good Man," Pepe the Frog is the "superhero" who gets vindication 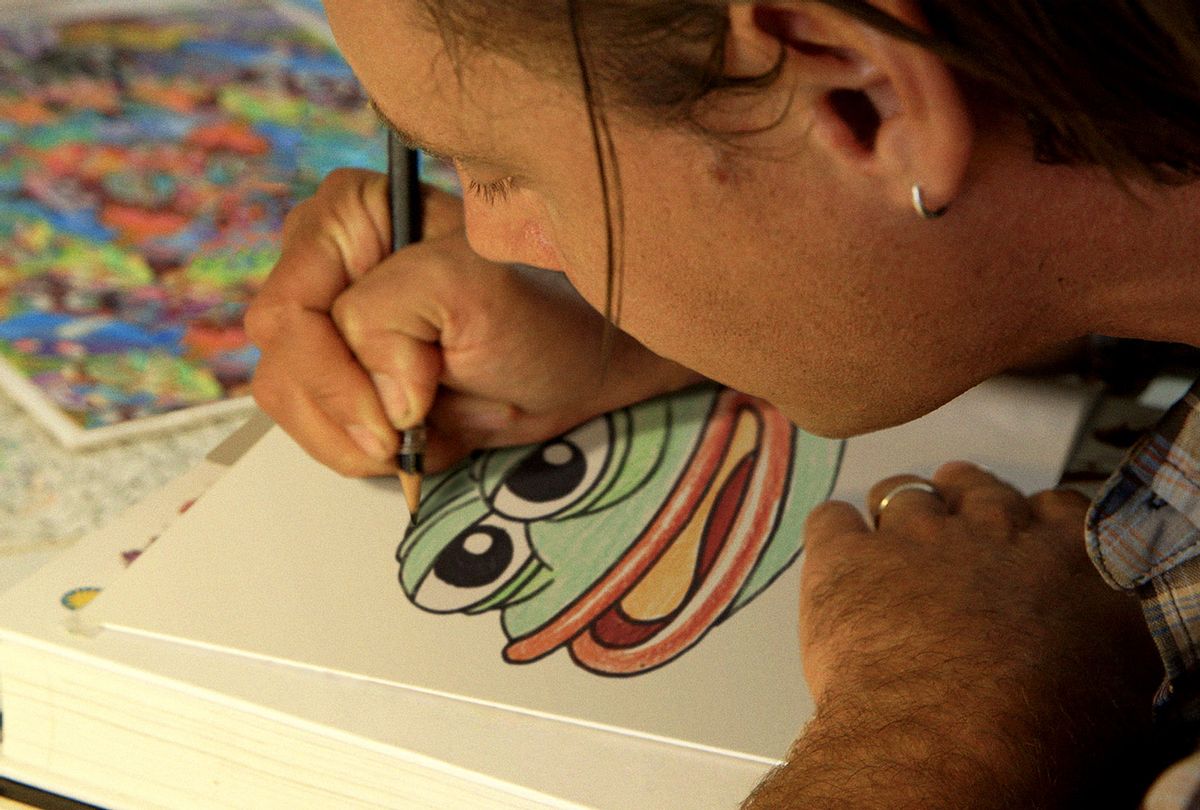 Gentleness is the first impression leading us into "Feels Good Man," which opens with artist Matt Furie stooping to pick up a tiny amphibian by a local lake, smiling as it hops up his arm. From there it cuts to his studio, where Furie draws the cartoon frog that accidentally made him famous – a friendly looking, bug-eyed character with slightly sleepy eyes named Pepe.

For better or worse – likely the latter – people are likely most familiar with the version of Pepe that is smug, sneering, crudely drawn and racist. That cartoon facsimile that crawled out of the 4chan swamp and was weaponized by incels, white supremacists and inevitably, Donald Trump's 2016 campaign. This is not where Pepe began, as Arthur Jones' documentary shows.

Furie's comic "Boy's Club" establishes Pepe is a good-natured slacker who loves pizza and beer and hanging out with his equally aimless roommates. The artist explains that he named him after a childhood memory of a cousin who peed with his pants down instead of simply unzipping his fly. This isn't the most dignified origin story for a cartoon character, but it is light years away from the figure that stars in memes intended to dehumanize and intimidate.

In talking to Furie during a recent phone conversation it is obvious he never wanted to be in this situation – as in, talking to a reporter about his art from a place of having to defend and vindicate it. That opening scene of "Feels Good Man" speaks volumes about who he is – kind, sociable, but also an introvert.

"I mean, we're constantly trying to make sense of these dualities," Furie said during an interview with him and Jones. "So on one side, like for me as an artist, there's a part of me that just wants to be left alone. And then the other part of me wants the attention and wants to be interviewed. I think everybody's kind of at odds with themselves."

Through "Feels Good Man" filmmaker Arthur Jones presents a true history of Pepe the Frog that establishes the truth of the cartoon's origins and both celebrates and vindicates Furie while also functioning as an explainer for Internet memes – what they are, how they proliferate, the power they have to not only change the world but shift reality as we know it, and how Pepe was weaponized to serve specific malignant purposes.

Put another way by author Dale Beran, who wrote "4chan: The Skeleton Key to the Rise of Trump": "What's more worthless than a cartoon? But what's more powerful than Mickey Mouse?"

Jones' documentary balances its look into Furie's life and career with an analytical trace of Pepe's transformation from a harmless, sweet drawing into a symbol of hatred so toxic that the Anti-Defamation League lists it on its database. "Feels Good Man" fades these contrasting feelings into each other as if to create some sort of emotional ombre effect, if such a concept exists.

"All of a sudden Matt's name was listed in the writeup for the ADL and he was put on blast to a certain degree," Jones explained. "Most cartoonists who are making work by themselves, idiosyncratic independent work, wouldn't necessarily have to all of a sudden become like a political pundit or a philosopher of the internet, you know, so it was a really new situation. He had to somehow talk about issues of like artistic agency online and all these sorts of things that most artists wouldn't have to necessarily speak about."

The film's bifurcated emotional approach is strange but effective in that it takes an object that represents highly impersonal and inhumane impulses and intimately reconnects it to Furie's artistic passion and loving philosophical outlook.

On one side are affectionate testimonials about Furie from the people who know him best, including his partner Aiyana Udesen, comedian Emily Heller and fellow cartoonist and "BoJack Horseman" and "Tuca & Bertie" animator Lisa Hanawalt. On the other are authorities in the realm of social media and memes, 4chan users who participated in the co-opting of Pepe, internet security experts and professors explaining Pepe's transformation from an underground comic character uploaded by its creator to MySpace to a visual code meant to incite hatred.

Even these sections are presented with a touch of cheekiness, featuring frames of conversation with The Atlantic's Adam Serwer in proximity to opinions on the matter of Pepe and his occult symbolism contributed by John Michael Greer, an author and druid.

This is not as bizarre as it sounds – and actually, Furie loves Greer's contribution to "Feels Good Man."  "I was surprised to see how potent his words were, it resonated with me, him saying that, like Pepe's an omen and that you can't really change the past, but you can try to alter the course of its current path," he said. "I don't know. It just spoke to me on a level that was a little more freeing than the more kind of dry political commentary."

Jones also brings Pepe's travails to life through animated sequences, enabling the frog itself to react to having his amiable persona and good name hijacked by bad actors.

And these sequences are as heartrending as Furie's accounts of watching his creation from a distance as it morphed on the Internet from a harmless meme claimed first by Internet-savvy teenagers before becoming a mascot for angry, depressed introverts. They are the product of Jones' friendship with Furie, a connection he said informed his approach to making "Feels Good Man."

"I felt like I was almost like stalking Pepe," Jones said. "like I was getting more entrenched with the character than maybe he had ever been." But his closeness to Furie also meant having to batten down his impulses to defend his friend when interview subjects critiqued him or said cruel things.

"It was an interesting negotiation," he admitted. "But at the same time, we wanted this to be a piece of art that stands on its own, something that wouldn't be a vanity project. We wanted it to have its own integrity and intellectual lumps."

Hence the lack of qualification when the film shows the point at which Furie could have prevented Pepe from escaping his control. Early in the proliferation of the Pepe meme a friend advised Furie to threaten legal action against anyone using Pepe's image without his permission. Furie's insistent sanguinity won out, and he chose to look the other way.

He understood why Pepe's simple look and ethos made him attractive to the young but didn't fathom that those same qualities made the image corruptible. Furie's breaking point arrived when someone attempted to join those notions in an Islamophobic and xenophobic picture book targeting children, leading him to enlist the help of a team of copyright lawyers working pro bono to stop organizations from using Pepe's image in association with bigotry of any kind.

Trump surrogate Matt Braynard, who led the data team for his 2016 presidential campaign, says this by way of explaining how his team tapped into Pepe's appeal among the alt-right to expand Trump's social media reach and make a narcissistic septuagenarian who referred to the Internet as "the cyber" cool among disaffected young 4chan posters.

As for whether Braynard expresses any remorse for his part in molding Furie's creation into a sinister weapon, keep dreaming.

"Maybe if the original artwork wasn't so pedestrian and basic that an 8-year-old can draw Pepe, a scribbling that was improved upon by others, that was given meaning that it never had before . . . I would just encourage Matt to just be glad to have been a small part of a very big thing," Braynard says in the film.

Viewing Braynard's glibness in the wake of seeing the harm he had a part in creating can be enraging. But when I shared that with Furie, he had a different take. "I actually was a little delighted by that because he looked kind of like Lex Luthor, and I feel like Pepe is the real superhero of the film," the artist said. "You need a Lex Luthor in there just to add a little dynamic to the story. And I thought it was good to have somebody on that side be able to explain their point of view and uh, you know, I just took it in stride."

One question "Feels Good Man" doesn't quite answer is simultaneously the simplest and the most bewildering: Why Pepe? What is it this small cartoon that popped up on Furie's MySpace page that made him the perfect mascot for both innocence and rancor.

"Pretty much every interview we did, we asked both questions: Why do you think frogs are such a potent image that people are attached to, and then why Pepe?" Jones said. "And it was a question that no one could really answer with any succinctness. I think part of this film is that people are going to have to sort of interpret 'Why Pepe?' for themselves as they watch it."