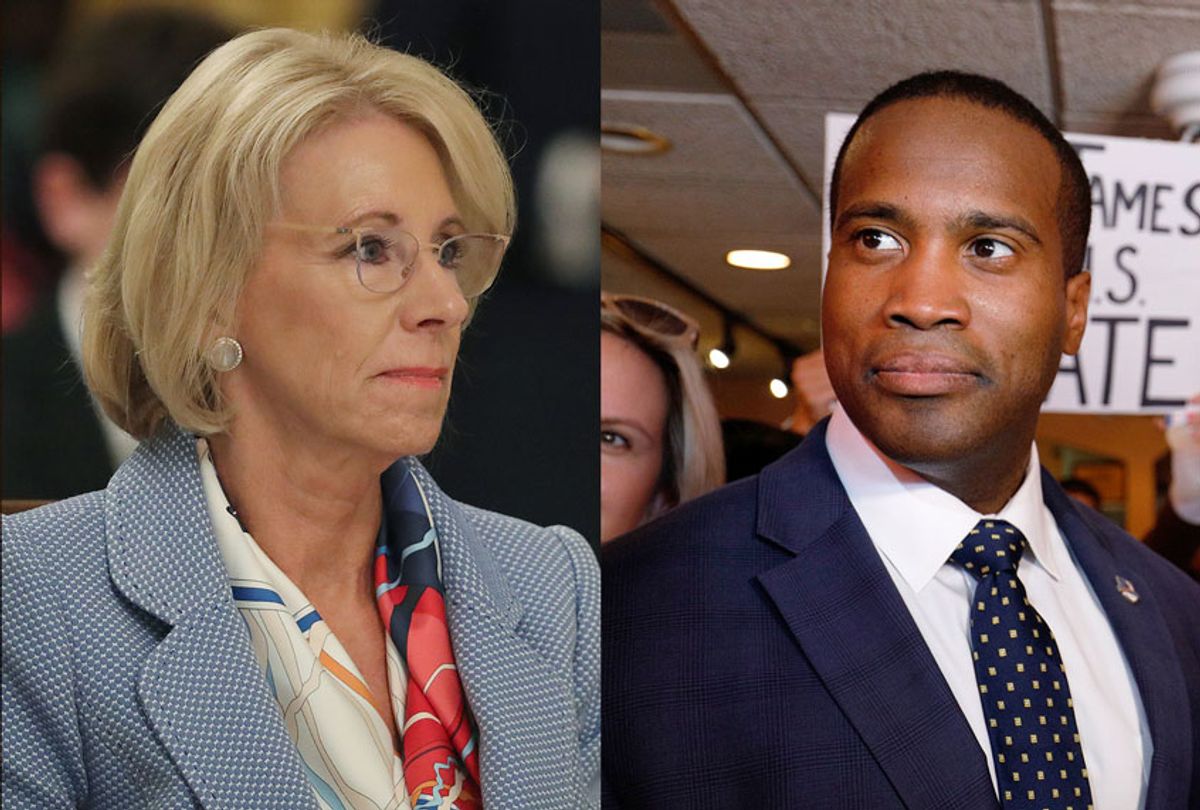 Michigan Republican Senate candidate John James attended a fundraiser at the home of Education Secretary Betsy DeVos' brother-in-law while trying to downplay the financial help his campaign has received from the family.

James attended a fundraiser at the home of DeVos' brother-in-law, Dan, and his wife, Pamella, last month. Though James was well-distanced from the crowd, none of the attendees appeared to be wearing masks, according to a photo published by former Allegan County Republican Party Chairman Kevin Whiteford to Facebook.

What a great event by the DeVos family at Dan and Pam's home for a great cause supporting John James who will be Michigan's next new Senator.

James has extensive ties to the DeVos family, which has poured money into his race against Sen. Gary Peters, D-Mich. His campaign recently hired Betsy DeVos' niece, and his wife has worked at the DeVos family's Amway empire for years. Members of the DeVos family have directly donated tens of thousands to his campaign.

The DeVos family has also funded the Better Future Michigan Fund, a super PAC which has now spent at least $7.1 million to help James defeat Peters. Dan and Pam DeVos have contributed hundreds of thousands of dollars to the super PAC.

Despite other Republican Senate candidates being outraised by massive sums across the country, James has managed to outraise Peters throughout most of the campaign despite losing his 2018 Senate race to Sen. Debbie Stabenow, D-Mich., by seven points.

Two recent polls, one of which showed the race virtually tied, suggest that Michigan is one of the few competitive seats where Republicans could pull off an upset next month.

James has spent some of the money he's raised to buy ads downplaying his ties to the DeVos family.

James recently released an ad trying to distance himself from Betsy DeVos' assault on public education, insisting that he believes a "quality education is a basic civil right."

"You're not running against President Trump, or Betsy DeVos or any other boogeyman," James told Peters in the ad. "You're running against me. This may surprise you senator, but no one owns me."

A Democratic super PAC accused James of backing "DeVos' agenda to cut public school funding and put it into wealthy private schools instead." Politifact Michigan rated the claim "mostly false," though only because James has repeatedly avoided saying anything specific about his education policy. James has frequently declined to state his views on education, and he turned down a request to push back on the claim. His campaign declined PolitiFact Michigan's "request for any details about his education policies that would rebut" the allegation. The campaign did not respond to questions from Salon, as well.

James has generally been supportive of DeVos' agenda, which has steered money away from public schools to private and religious schools.

"She's headed in the right direction," James reportedly said in 2018. "She's got a lot of inertia, I think. By doing things to get more power back to the states and to parents, I truly believe that if we give parents the resources and the opportunity to decide what's best for their children, they will make the best decision 100% of the time."

"The job Betsy DeVos is doing in pubic education, I think, is very, very good," he reiterated a few months later in audio published by the Democratic Senate Majority PAC.

Those comments came after DeVos sought to cut Department of Education funding while increasing federal grants to private schools.