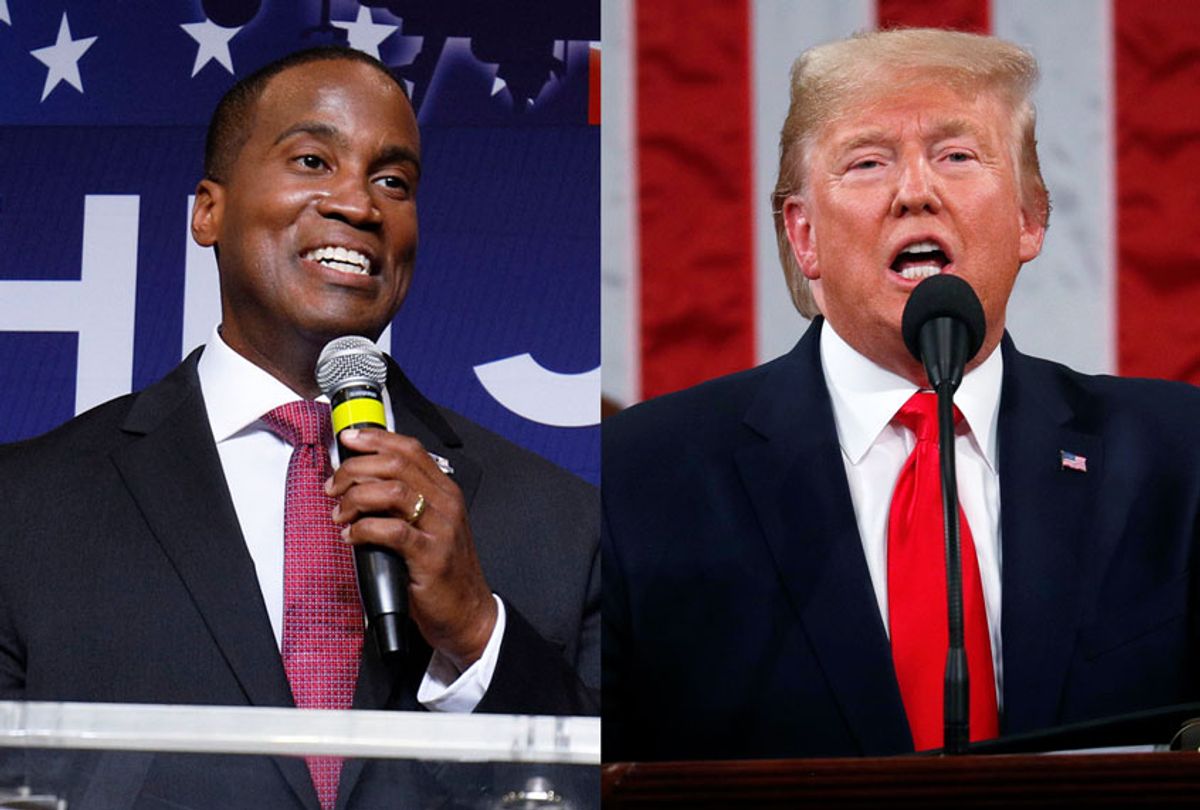 John James, the Republican nominee for a U.S. Senate seat in Michigan, privately told African-American leaders in the state that it was pointless to publicly call out President Donald Trump's racist statements — shortly before he publicly criticized former Vice President Joe Biden for "hurtful" remarks he made about black voters.

"When I do talk about a prosperity agenda, that's the goal, is achieving equity and equality for our people, not standing up on Twitter and condemning folks," James said in a leaked video obtained by Salon, in response to a question about why he had not spoken out about the president's racist rhetoric. "We've had our minds twisted to believe that speaking out is tantamount to fixing things."

James, who is black, made the comments after he was conspicuously silent during Trump's racist attacks on Democrats of color. Just weeks after the April call, James lit into Biden for telling a black radio host that being unsure about backing his candidacy means "you ain't black."

"Vice President Biden, with all due respect, your latest comments are both pathetic and hurtful," James said in a video posted to Twitter. "You challenging me and millions of other people out there on their blackness, descendants of slaves, from you, is some seriously condescending, out of touch bull-crap. You're embarrassing yourself, Mr. Vice President."

James followed up the video by publishing an op-ed at Fox News titled "Hey, Joe Biden, I'm black enough to think for myself."

James' campaign did not immediately respond to a request for comment.

The candidate's comments about Trump came during a video conference with African American community leaders on April 30, first reported by Politico.

The appearance drew criticism when James, who previously declared that he supported Trump "2,000%," insisted to the leaders that he disagrees with Trump on "plenty of issues."

"Everything from cutting Great Lakes funding to 'shithole countries' to speaking ill of the dead," James said, according to Politico. "I mean, where do you want to start? And so yes, there's gonna be places that I disagree with the president and those are just a couple."

But in the video obtained by Salon, James argued that publicly disagreeing with Trump would hurt his candidacy.

"Do you think that Esther could have saved her people by spitting in the king's face?" James asked, referring to the biblical queen who saves the Jewish people from a massacre planned by her husband, the Persian king. "No. She was able to do that, because she was in the king's chambers. Do you think that Moses was able to speak to the pharaoh multiple times? No, it's because he was raised in those and was able to get into those chambers. And all throughout, how things have worked has been the ability to access.

"Look, Donald Trump doesn't need less black folks around him, he needs more. And that's exactly what I'm asking you to do is to look at my actions, because they say actions speak louder than words. I'm asking you to look at my actions and recognize that, working in reality, that I have to make sure that I get to the seat so I can help people, which is why I'm having this call here."

The comments came in response to a question from a Michigan pastor who asked whether James was willing to stand up for his community against the president's offensive remarks.

The questioner then took issue with James' claim that he disagrees with the president on numerous issues, given his reluctance to criticize him.

"I've looked at your campaign throughout the months. As I looked at some of the material, I don't see you standing out front saying, 'No, I condemn this regardless of my party affiliation,'" the pastor said. "You say that you will say something. I don't want to wait until you're in a seat to hear you say something."

James, an Iraq war veteran and business owner, lost his first Senate bid against Sen. Debbie Stabenow by 6.5 percentage points in 2018. James is running against Michigan's other Democratic senator, Gary Peters, this time around.

After the comments were first leaked to Politico, James insisted that he is willing to criticize Trump.

"When the president is right on what he's doing for Michigan, I'll support him. And when I disagree with him, I will let him know. It benefits the state of Michigan to have that perspective and that voice," he told The Detroit News. "The fact that this was leaked with the intent to hurt me just shows that there's some folks in Washington that are so out of touch with a Michigan that's desperate for experienced leadership and fair representation."

The Michigan Democratic Party accused Jones of trying to have it both ways when it comes to Trump.

Trump aides, ironically, are also "suspicious that James is trying to have it both ways," according to Politico.

Donald Trump Jr. downplayed James' comments about disagreeing with the president at the fundraiser last week.

"This is the nonsense that we will be living the next six months, so I can assure everyone that John is all for the agenda. He understands it," he said. "He's going to implement it, and he's going to be an incredible United States senator."

"After taking heat for talking out both sides of his mouth, James' move to rake in campaign cash with Trump Jr. is a clear indication of where his loyalty really stands," Kuhn told The Detroit News. "2,000% with Donald Trump, not with Michigan families."