With vaccines stalled, some see coronavirus rapid tests as an alternative way to return to normal

An effective and cheap rapid coronavirus test could be almost as good as a vaccine, experts say 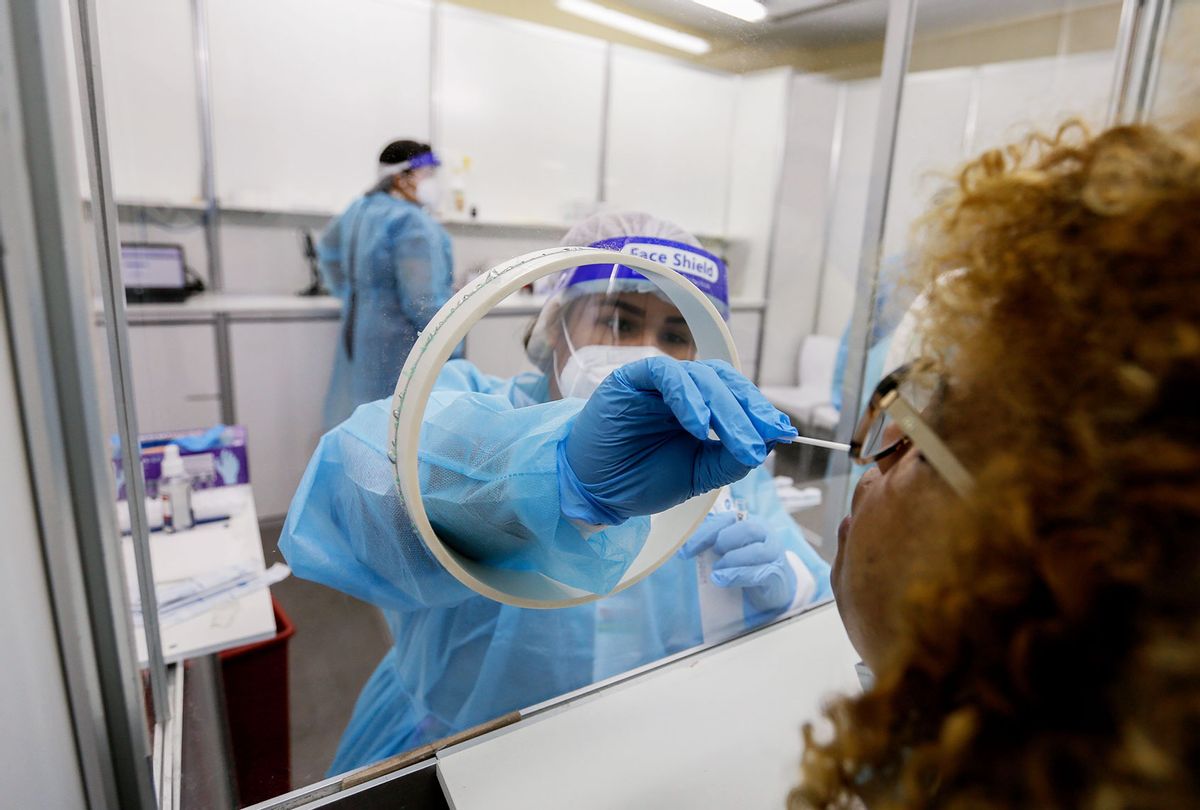 For the past seven months of the pandemic, hope for returning to normalcy has hinged on the development of a vaccine for the novel coronavirus, the virus that causes COVID-19.

Yet some scientists and public health experts think that this approach isn't quite right. Some say the path to normalcy lies not in a vaccine (or not solely in one), but also in the prospect of a cheap, ubiquitous coronavirus rapid test.

Such a test would mean that those who were entering a hospital, a place of work, or going on stage for a presidential debate could know within minutes if they had coronavirus. The implications for society are immense: those with the virus would have near-immediate knowledge of their positive result, and the same for those without. Those who knew their status could then quarantine accordingly, thus eliminating the spread of the virus by those who are silent carriers or pre-symptomatic.

As we wait for a vaccine, the need for some kind of effective, quick testing regime only grows. The alternatives are less effective: as Salon reported last week, touchless temperature checks are an ineffective gatekeeper to schools and public spaces where essential workers gather. Experts emphasized that accurate rapid testing would be better.

"In order for people to go out to the grocery store, go see their doctor, to go out to have dinner, we need a much more rapid test and we need them in very large numbers and we don't have that yet,"  Dr. Natalie Lambert, an associate research professor at Indiana University School of Medicine told Salon.

Katelyn Gostic, an epidemiologist at the University of Chicago, agreed.

"What I think would be more effective, although also more expensive, would be rapid antigen tests," Gostic said. "Detecting the presence of the coronavirus in someone's saliva is a much more direct indicator of whether that person is contagious than trying to take their temperature."

Rapid tests are not a new idea. They've been a barrier to entry for parties in the Hamptons. The White House supposedly relied on them, albeit nearly 20 members of the Trump administration and campaign got infected with the coronavirus. Most recently, Nevada halted a rollout on antigen rapid tests in nursing homes after false positives emerged, which the state eventually revoked after the federal government threatened the state.

So would rapid tests be a better bet than a long-shot vaccine at returning us to a sense of normalcy? And can we expect a widespread roll-out of rapid antigen tests soon? Here's what we know.

What are rapid tests, and how are they different from the COVID-19 swab tests?

As far as diagnostic tests go, there are two of them: molecular tests, (also known as RT-PCR tests) that test for the coronavirus' genetic material, and antigen tests that detect specific proteins on the surface of the virus. Both are done via a nasal or throat swab, but the antigen's test results can be returned within an hour, or sometimes even 10 to 15 minutes after taken.

The results don't need to be processed in a lab. However, the rapid antigen test needs a sample to contain a higher viral load or it could give a false-negative result.

"If an antigen test shows a negative result indicating that you do not have an active coronavirus infection, your health care provider may order a molecular test to confirm the result," the United States Food and Drug Administration states.

There are many rapid antigen tests on the market, such as BinaxNOW™ by Abbott, cobas by Roche, Sofia by Quidel and Becton, and BD Veritor by Becton, Dickinson and Company.

Do rapid tests have accuracy problems?

No. However, antigen tests are less sensitive than PCR tests. In a recent University of California — San Francisco (UCSF) study, researchers created a COVID-19 pop-up testing site at a rapid transit station in San Francisco, to provide "low barrier" PCR-based testing to the community. In addition to providing PCR-based testing, the volunteers compared results to the rapid BinaxNOW test.

"It's a cardboard paper card with a little test strip; one takes a nasal swab, it's not that painful, and you then stick it in a slot in the card and turn it clockwise three times, you add some drops of the little buffer solution that they give you to put in the hole in the card, and you wait 15 minutes," CZ Biohub Co-President Joe DeRisi, PhD, a professor in the Department of Biochemistry and Biophysics at UCSF, whose team led the analysis of the BinaxNOW tests for the study, told Salon. "The result is given visually by a little colored band that appears in a window, almost identical to pregnancy tests."

Over three days, researchers tested 879 people at the transit station; 26 individuals tested positive on the PCR tests. Fifteen of those people were most likely to be actively infectious, the researchers suspected, based on the high amount of the coronavirus detected in their PCR samples. Fourteen out of those fifteen people tested positive with the rapid BinaxNOW tests. Interestingly, 11 people who had negative BinaxNOW test results were positive on PCR tests, indicating some inaccuracy. The researchers said that all those people had lower virus levels, which was expected since these tests are less sensitive and don't easily discern between uninfected people and those with lower levels of the coronavirus. For this reason, rapid antigen tests, at the moment, won't replace PCR tests.

"It doesn't replace a solid PCR test, but it's an incredibly valuable tool in an expanding arsenal of testing modalities against COVID-19," DeRisi said. "And why it's an important tool is its speed; we know that the most important thing in stopping this pandemic is the cutting of transmission chains and to do that we must identify who is infectious and stop them from infecting other people by isolation and quarantine."

"So compared to a test that may come back two days later, one day later or three days later, something that comes back in 15 minutes allows you to provide isolation and quarantine to that individual much much faster," DeRisi said.

If these are so critical to stopping the pandemic, why don't we have widespread rapid antigen testing yet?

The barriers to rolling out widespread rapid antigen testing are both political and physical, but DeRisi emphasized it's not an issue of technology.

"The barriers are production levels," DeRisi said. "I know that manufacturers are scaling up greatly right now and I actually predict that there'll be very, very little barriers by probably the first quarter of 2021," he added. DeRisi said that training people to use the tests like the BinaxNOW test is crucial to their accuracy.

Amesh Adalja, a senior scholar at Johns Hopkins Center for Health Security, told Salon another barrier is implementing a cohesive plan, particularly when you often see false positives and false negatives from a rapid antigen test.

"We need to have a plan around how to use those tests," Adalja said. "They can be followed up by confirmatory tests."

"We still have this kind of misinformation or misguided view of testing, this scoreboard approach that's not allowed [...] some of the testing to flourish as well as would have, because of the way this has been viewed by the White House," Adalja said. "And you can even see that in the negotiations of the newest stimulus, that there is reticence about putting in more money for testing because the President does not support more testing than we're doing."

Another barrier relates to how the importance of testing is perceived by the Trump administration. In an interview with Fox News, Trump recently said, "cases are up because we have the best testing in the world and we have the most testing."

In late August, the Trump administration announced a $750 million deal to buy 150 million rapid Covid-19 tests from Abbott Laboratories. However, experts said that number of tests is not nearly enough given how it's supposed to be used, and how frequently, and how many Americans there are.

So, how will rapid tests be used in the future?

There is some debate around whether rapid COVID-19 tests will be issued by professionals at schools and office buildings, or if they will be used at-home.

"I think we have the technology, and people can test themselves for HIV at home, but there's no reason that they shouldn't be able to test themselves for COVID-19 at home," Adalja said. "But again, then there's regulatory barriers to try and get an at-home test approved for use by the FDA."

DeRisi told Salon he would be concerned that at-home testing would come with its own set of issues— like people not reporting that they're positive, or going to work when they're positive anyway for a variety of reasons.

"I don't think a good infection control policy should be left up to the individual to implement on their own," DeRisi said. "I think it should be within the structure of a healthcare system and the workplace and the schools, that makes a lot more sense to me."