The asteroid, Bennu, may have had water on it at some point and could offer clues about the origins of life 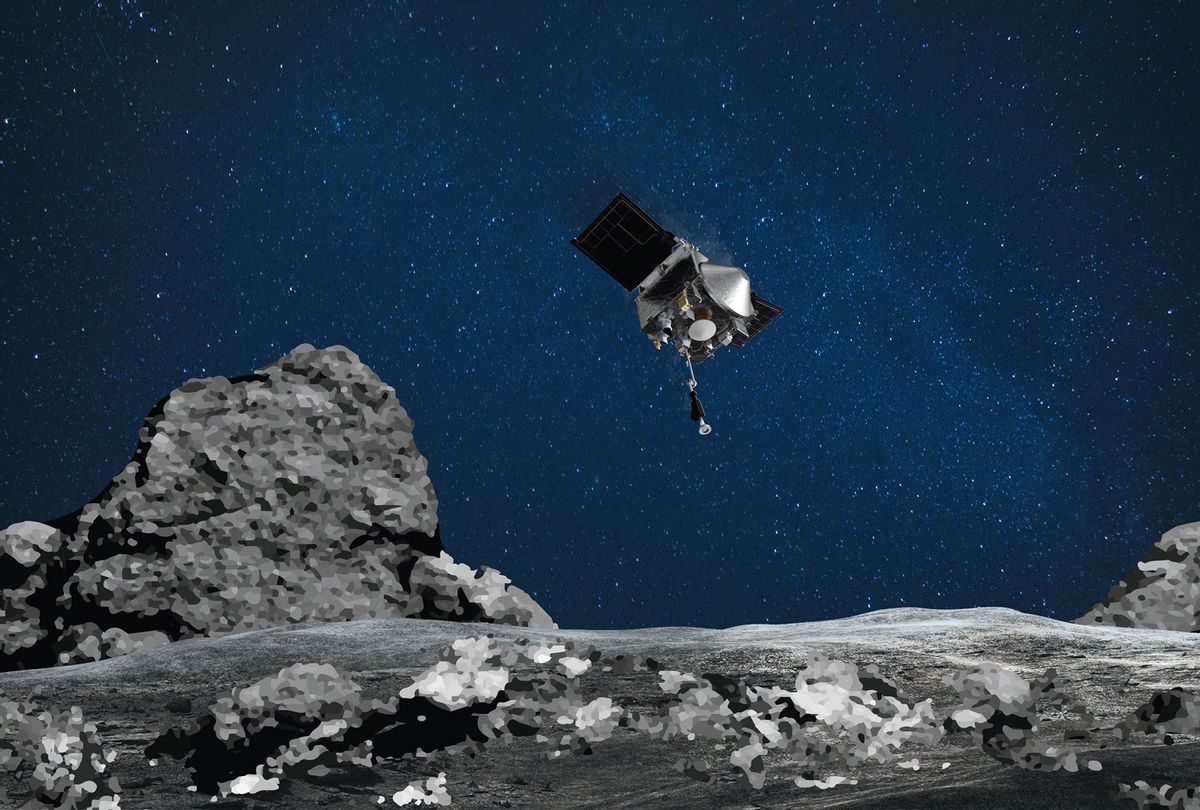 NASA’s OSIRIS-REx mission readies itself to touch the surface of asteroid Bennu. (NASA/Goddard/University of Arizona)
--

The National Aeronautics and Space Administration (NASA) made history on Tuesday when its OSIRIS-REx spacecraft collected samples from an asteroid, Bennu, that scientists believe may have had water on its surface earlier in its history.

OSIRIS-REx briefly touched the asteroid's surface in order to gather rocks, pebbles and other geological artifacts from the celestial body so that they could be brought back to Earth by 2023, according to NASA. Despite spending several hours getting to the asteroid's surface, engineers believe that it only touched it for roughly six seconds before using its thrusters to back away. On Wednesday, the agency released partial footage of OSIRIS-REx's journey, one that showed the spacecraft's arm slowly descending toward soil that looked not too different from what one might find in an Earth desert.

"You can see that particles are flying all over the place," Dante Lauretta, the principal investigator for the OSIRIS-REx mission, told reporters in a news briefing on Wednesday. "We really did kind of make a mess on the surface of this asteroid, but it's a good mess. It's the kind of mess we were hoping for."

According to the agency, on Tuesday OSIRIS-REx used its thrusters to push itself out of orbit around Bennu, where it has been since 2018. The spacecraft then commenced a roughly four descent of a half-mile toward its surface, followed by a pair of maneuvers that allowed it to reach "Nightingale," a predetermined site the size of a small parking lot that had one of the few relatively clear spots on the asteroid, which is covered in boulders. Once it landed there it used its sampling arm, known as the Touch-And-Go Sample Acquisition Mechanism (TAGSAM), to collect the materials from Bennu's northern hemisphere.

"This was an incredible feat – and today we've advanced both science and engineering and our prospects for future missions to study these mysterious ancient storytellers of the solar system," Thomas Zurbuchen, associate administrator for NASA's Science Mission Directorate at the agency's headquarters in Washington, said in a statement. "A piece of primordial rock that has witnessed our solar system's entire history may now be ready to come home for generations of scientific discovery, and we can't wait to see what comes next."

Watch the sampling arm of the craft make contact with the surface in the video below:

There are a number of reasons to be optimistic about what these soil samples could teach us about the origins of life in the universe. For one thing, Bennu is a carbonaceous asteroid, meaning that it is comprised largely of carbon, an element considered to be one of the building blocks of life. The astroid itself is small, about 500 meters in diameter. Two years ago Lauretta announced that, based on the seeming appearance of clay-like materials on the asteroid's surface, that Bennu "appears to be a very water-rich target, and water is the most interesting and perhaps the most lucrative commodity that you would mine from an asteroid."

Amy Simon, deputy instrument scientist at NASA's Goddard Space Flight Center in Greenbelt, Maryland, elaborated on this at the time, explaining that "the presence of hydrated minerals across the asteroid confirms that Bennu, a remnant from early in the formation of the solar system, is an excellent specimen for the OSIRIS-REx mission to study the composition of primitive volatiles and organics. When samples of this material are returned by the mission to Earth in 2023, scientists will receive a treasure trove of new information about the history and evolution of our solar system."

NASA experts believe Bennu is ancient and, in addition to possibly shedding light on how life came to our planet, may also provide information about the formation of the early solar system.

The next step for NASA is to ascertain exactly how much of the asteroid it was actually able to collect. To do this, they will first need to use a camera to take photographs of the TAGSAM, from material captured inside to that stuck to several pads at the bottom of the spacecraft, according to SpaceNews. Once they have done this, NASA will then slowly rotate OSIRIS-REx, in the process measuring the change in its moment of inertia and thereby allowing them to figure out the mass of their sample within a margin of error of roughly 20 grams.