While asteroid Bennu can't host liquid water now, its parent asteroid might have in the past, the spacecraft found 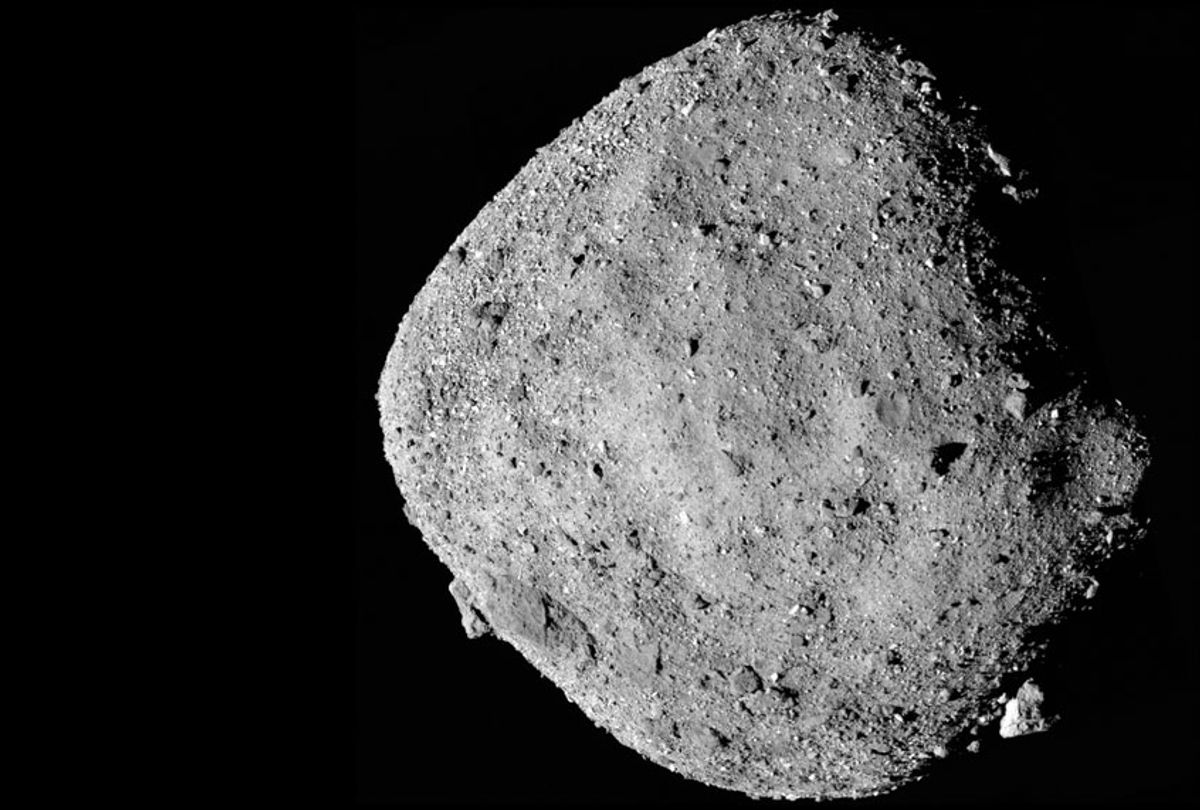 This mosaic image of asteroid Bennu is composed of 12 PolyCam images collected on Dec. 2 by the OSIRIS-REx spacecraft from a range of 15 miles (24 km). (NASA/Goddard/University of Arizona)
--

A small yet (comparatively) nearby asteroid named Bennu might have had water on its surface in the recent past, according to one of the latest updates NASA’s OSIRIS-REx spacecraft has sent back to Earth.

Since parking itself nearly 12 miles above the surface of Bennu in early December — a location that took nearly two nearly two years to get to, — OSIRIS-REx recently discovered a fascinating tidbit about the asteroid: it is littered with clay-like materials that suggest parts of the asteroid had liquid water on it.

“Bennu appears to be a very water-rich target, and water is the most interesting and perhaps the most lucrative commodity that you would mine from an asteroid,” Dante Lauretta, principal investigator of the OSIRIS-REx mission, said at a press conference to announce the news.

According to a press release regarding the discovery, scientists suspect that much of the asteroid’s minerals are full of “hydroxyls,” molecules that contain oxygen and hydrogen atoms bonded together. Bennu is too small to host liquid water in its current state, but the finding indicates Bennu interacted with water in the past. Perhaps it was on Bennu’s parent body, an asteroid it could have possibly separated from at some point, researchers speculate.

“The presence of hydrated minerals across the asteroid confirms that Bennu, a remnant from early in the formation of the solar system, is an excellent specimen for the OSIRIS-REx mission to study the composition of primitive volatiles and organics,” said Amy Simon, deputy instrument scientist at NASA’s Goddard Space Flight Center in Greenbelt, Maryland. “When samples of this material are returned by the mission to Earth in 2023, scientists will receive a treasure trove of new information about the history and evolution of our solar system.”

Bennu is a carbonaceous asteroid, meaning it largely contains carbon. Its surface has been described by NASA researchers as “a mix of very rocky, boulder-filled regions and a few relatively smooth regions that lack boulders." The quantity of boulders on the surface is higher than expected. Scientists will have to make further observations to determine where a sample can be taken and returned to Earth. Surveying Bennu is its main priority right now, since the the climax of the mission will be when it collects a sample from its surface.

Sample-return missions are rare: due to the challenge of landing and later blasting off from a gravity well, most robot missions are content to park themselves either on the surface or in orbit of the object they study. NASA’s OSIRIS-REx is one of two sample-return missions in progress seeking to collect samples from asteroids. The Japanese probe Hayabusa2 is also gearing up to collect a sample from an asteroid called Ryugu for a return to Earth in 2020. The only non-Earth bodies from which spacecraft have successfully collected and returned samples are the Moon, asteroid 25143 Itokawa, and comet Wild 2.

Similar to the Hayabusa 2 Mission, OSIRIS-Rex is on a mission to understand Earth’s existence in this universe. Since asteroids are leftover matter from the solar system formation process, they can provide more insights into the history of planets and our solar system.

“Bennu may contain the molecular precursors to the origin of life and the Earth’s oceans,” the mission's principals wrote.

Interestingly, Bennu is also known to be a “potentially hazardous asteroid.” According to the mission overview, Bennu has one of the highest probability of impacting Earth in the late 22nd century (though that probability is still comparatively tiny). By knowing Bennu’s chemical and physical  makeup, scientists will be better prepared to devise a plan to mitigate a potential impact.