Two supposedly "average" voters in a Times story turn out to be hardcore Republicans. And it's happened before 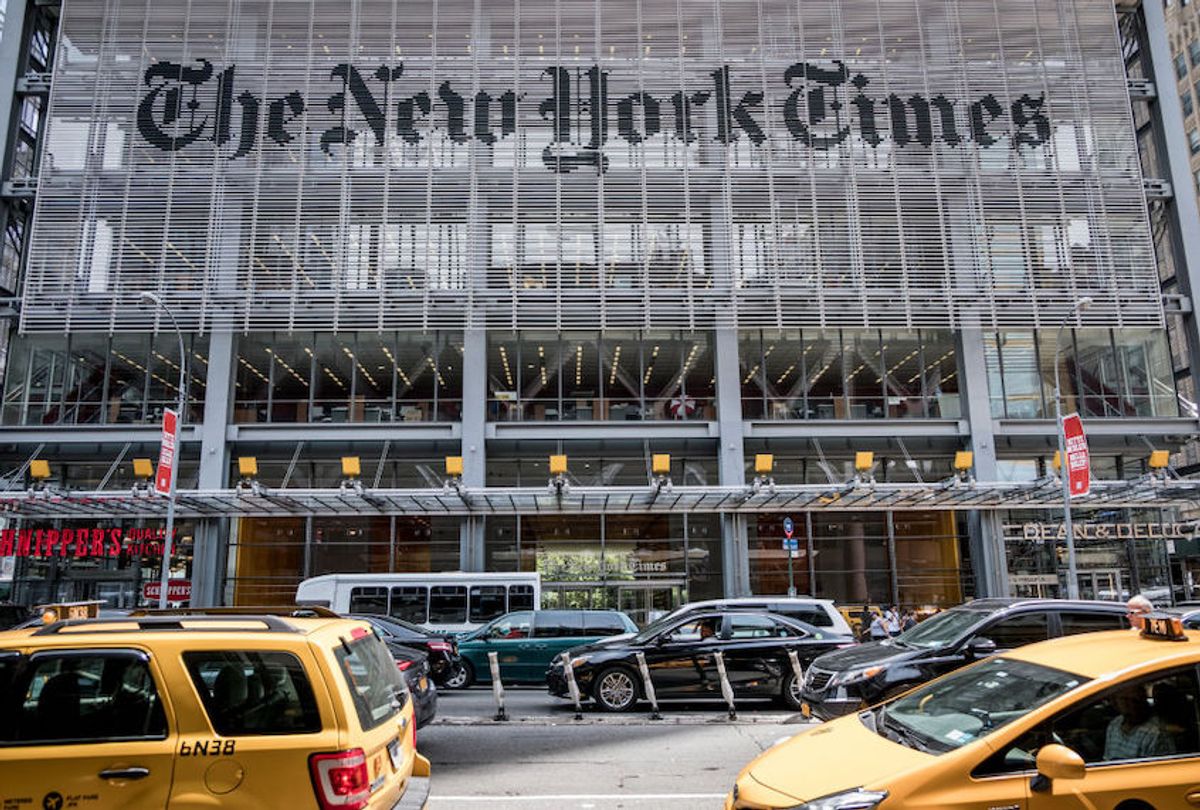 The New York Times building in the west side of Midtown Manhattan. (Avalon/Universal Images Group via Getty Images)
--

The New York Times has been caught, once again, passing off Republican operatives as "regular" Republican voters in an article intended to show how effectively Donald Trump is maintaining his support.

It raises serious questions about whether Times editors and reporters, rather than actually trying to determine how voters feel, are setting out to find people to mouth the words they need for predetermined story lines that, not coincidentally, echo the Trump campaign's propaganda.

In the latest case, an article posted on Wednesday headlined "Around Atlanta, Many White Suburbanites Are Sticking With Trump" by Times national reporter Elaina Plott initially misidentified two of the four allegedly run-of-the-mill voters who supported the article's thesis: That Trump's unfounded fear-mongering along the lines that "ANTIFA THUGS WILL RUIN THE SUBURBS!" is working.

The lead anecdote came courtesy of Natalie Pontius, who was simply identified as "an interior decorator, married with two children and a University of Georgia alumna."

"The riots, the push to defund the police — that's not the direction our country needs to go," Plott quoted Pontius as saying. "I feel like the Democratic Party is continually trying to come up with ways to divide us."

Pontius, it turns out, was a paid political consultant for a Republican candidate for Georgia's House of Representatives in 2018.

Evans insisted that the polls showing Joe Biden and Trump in a dead heat in Georgia are deceptive, because "you'll go to dinner with moderate or right-leaning voters who would never say in their workplace that they're voting for Trump, but when you're in private, it's all day, every day."

Evans, it turns out, chairs the state's branch of the Republican National Lawyers Association, is the immediate past president of the Atlanta Young Republicans, is a member of Republican Gov. Brian Kemp's election-security task force — and is the son of Randy Evans, a Republican heavy hitter rewarded by Trump with a cushy gig as ambassador to Luxembourg.

This isn't the first Times story of this kind to feature ringers. In a notorious June 2018 story by political reporter Jeremy Peters, headlined "As Critics Assail Trump, His Supporters Dig In Deeper," the supposedly ordinary Republican woman in the lead anecdote turned out to be a board member of an ultra-conservative PAC.

A whole host of questions

Among a legion of questions raised by this latest incident, my first has to be: Who assigned this story? What were they thinking?

The fact that Plott couldn't find real people to support its thesis suggests that she was assigned to produce precisely the story she did. (So does the URL, which I suspect reflects the editor's original "slug" for the story: "atlanta-trump-voters-women.")

Who looked at the latest poll data showing that a solid majority of white college-educated folks in Georgia are still backing Donald Trump and concluded that Trump's inflammatory post-George Floyd rhetoric was working?

Because, guess what? Given that the polls also show that support has been pretty steady over the last six months or longer, I'm pretty sure that isn't the real reason.

(Or to the extent that Trump's transparently dishonest "law and order" rhetoric is essentially one big dog-whistle for racism, maybe it actually is.)

And why is the Times continuing to buy into the framing of Trump's racist language and lawbreaking actions as a "law-and-order" message? The article used the term three times — including once in its subhead — without caveats. As I've noted before, the Times is making a mistake in failing to heed Washington Post opinion columnist Greg Sargent's warning that "any news organization that uncritically describes President Trump's reelection campaign as premised on 'law and order' appeals, without placing his concerted efforts to destroy the rule of law in America front and center alongside them, is helping to drain those words of all meaning."

Who at the Times requested a story that doesn't seem to be supported by the facts, that essentially provides cover for Trump's overt appeals to racism and lawbreaking, and that suggests it was good politics?

This, I'm afraid, is Dean Baquet's newsroom in a nutshell, where the anachronistic notion of "objectivity" is horribly misapplied to produce both-sides stenography instead of calling out liars and racists.

There are specific questions about how this article was produced.

Did Plott know the people she quoted weren't ordinary voters? Did she want to know? Did she ask? Did she hide it from her editors as well as her readers? How did she get their contact information?

To be clear: Reporters should take great care to find actually "average" voters before identifying them as such, should carefully question those voters to make sure they aren't ringers and should verify that by checking around — and their editors should do likewise.

Then there's the broader question of how the Times and other national news organizations find "regular people" to interview — especially in the age of COVID.

At this point, I think news organizations need to be a lot more transparent about how they go about this, at the risk of losing readers' trust entirely.

(As a counterpoint to the Times' story, consider this one by Time magazine's Charlotte Alter, the result of a three-week road trip through the battleground states of Wisconsin, Michigan and Pennsylvania, in which she describes finding a powerful strain of "unlogic": "reason distorted by suspicion and misinformation.")

Going forward, readers deserve to know exactly how the reporters found their way to the "average" people they quote, to judge for themselves how typical or atypical they may be. How many people did the reporters talk to before they found the person they needed for their story? What questions did they ask?

And finally, I need to bring up a point I've made repeatedly before: Simply quoting Trump supporters who mouth crazy talking points (whether they're ringers or not) is a terrible disservice to the reader.

Why are they saying these things? How can they possibly believe they are true? Consider Pontius' quote: "I feel like the Democratic Party is continually trying to come up with ways to divide us." What does she even mean by that? What leads her to that conclusion?

I think voter interviews are important. I'd like to see more interviews with Biden voters, for instance. But when it comes to Trump supporters, simply quoting them without trying to actually understand where they're coming from isn't good journalism. The key is for reporters to explore not just voters' political opinions, but their core values — especially those related to pluralism and authoritarianism — and their news sources.

The hero in this story is Charles Bethea, a New Yorker staff writer — and Twitter.

That's because Bethea had actually written a short profile of Evans for the New Yorker in 2018, when Evans was president of the Atlanta Young Republicans.

Evans would have been pretty easy to spot.

The tweets eventually resulted in corrections being appended to the original story on Friday:

An earlier version of this article referred incompletely to Jake Evans, an attorney and voter in Atlanta. Mr. Evans chairs the state's branch of the Republican National Lawyers Association and has been appointed to Gov. Brian Kemp's election-security task force. The article also misstated Mr. Evans's age. He is 33, not 31.

An earlier version of this article referred incompletely to Natalie Pontius, an interior decorator near Atlanta. In 2018 she served as a consultant for a Republican candidate for a seat in the Georgia House of Representatives.

For some inscrutable reason, the Times also published a second, vastly truncated version of Plott's story on the web on Thursday. Evans is gone from this version entirely. Pontius is moved from the lede to the kicker, but still not identified as a Republican operative.

This is a New York Times management failure, more than a reporting failure, though it is that, too.

UPDATE: The reporter on the story, Elaina Plott, and the Times's political editor, Patrick Healy, have tweeted explanations, as of Friday evening.

Plott wrote that she simply failed to do her "due diligence":

Healy, in a five-tweet thread, wrote that the premise of the story was to "understand factors" that were leading white college-educated white voters to back Trump. "We believe the premise and the story are sound," he wrote.

He wrote that the shorter version was simply a "Live Briefing" item. He did not explain why that item still misidentifies Pontius.

"The omission of information was an honest mistake; we were not trying to hide details," he wrote.

But Plott's excuse is almost too stupid to be believed. Did she not ask about these people's background? Did they mislead her? A simple Google search would have turned up Evans' obvious conflict. Did she not want to know?

Healy did not address how Plott came to contact the people she quoted, what her orders or preconceptions were, where those orders originated, who edited the story or how. All in all, an entirely unsatisfactory explanation.