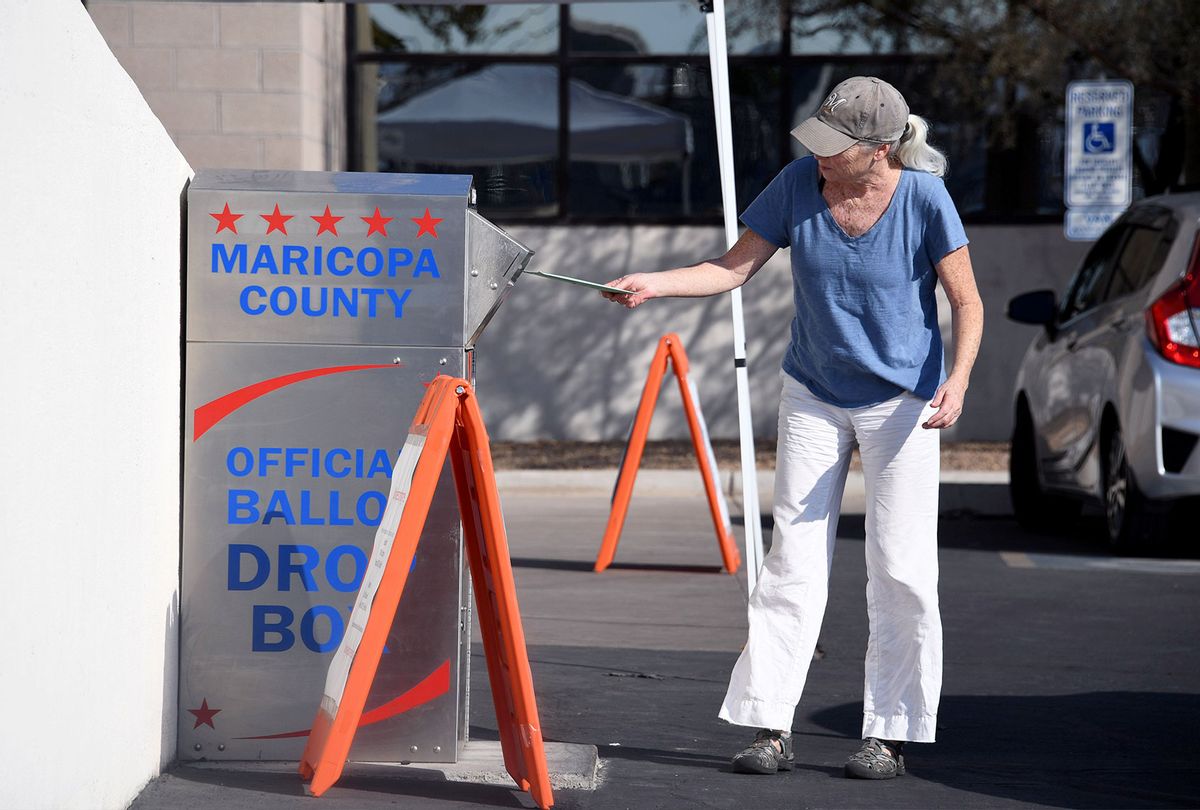 People deposit their mail-in ballots for the US presidential election at a ballot collection box in Phoenix, Arizona on October 18, 2020. (Joe Raedle/Getty Images)
--

The Trump campaign began videotaping Philadelphia voters dropping off ballots at drop boxes earlier this month before filing a complaint to city officials alleging that a campaign employee had observed voters depositing multiple ballots at a time, according to The New York Times.

Trump campaign attorney Linda Kerns demanded that city officials turn over the names of all voters who used a drop box in front of Philadelphia's City Hall on Oct. 14, as well as security footage from the area. She also demanded that the city place a monitor to watch every drop box "at all times."

"This must be stopped," she wrote in a letter, alleging that individuals dropping off multiple ballots "undermine the integrity of the voting process."

Pennsylvania law allows authorized voters to drop off ballots if they are assisting someone who needs assistance or someone with a disability.

City officials rejected the claims, arguing that the voters photographed by the campaign had not done anything wrong.

"Third party delivery is permitted in certain circumstances," Benjamin Field, a deputy city solicitor and counsel to Philadelphia's Board of Elections, said in a letter responding to Kerns.

"The board cannot agree with your conclusion on the basis of the information you provided. Nor can the board, in exercising its duties, assume that an individual is violating the election code when that person can act as an agent for a voter who required assistance," he added, according to The Times.

A Trump campaign official acknowledged earlier this month to The Times that operatives would video record voters at drop boxes. The official claimed that the campaign was only focused on people dropping off large numbers of ballots.

"That assertion appears to have been false," the outlet noted, citing examples from Kerns' letter referring to voters who appeared to drop off two or three separate ballots.

"We believe these to be just the tip of the iceberg," Kerns wrote. "Without reasonable checks, this behavior continues unabated and with impunity."

The tactic may underscore a larger campaign tactic. The campaign plans to launch a massive poll watching operation led by controversial Philadelphia Republican operative Mike Roman, who has tried to sow doubt in the election, according to The Guardian.

Shapiro, a Democrat, told The Times that the tactic may amount to illegal voter intimidation.

"Pennsylvania law permits poll watchers to carry out very discrete and specific duties — videotaping voters at drop boxes is not one of them," he said. "Our entire system of voting is built on your ballot being private and your choice to vote being a personal one. Depending on the circumstance, the act of photographing or recording a voter casting a ballot could be voter intimidation — which is illegal."

The campaign claimed that it had the right to record outside of polling sites, but campaign operatives previously tried to record voters picking up mail-in ballots at a satellite election office before being thrown out by city officials.

A spokesperson for Philadelphia District Attorney Larry Krasner told The Times that the office was "committed to investigating any and all allegations of voter intimidation and harassment" and expected "that any organized efforts from campaigns will fully comport with Pennsylvania law."

The Trump campaign previously filed a lawsuit seeking to ban drop boxes in the state, but the effort was shot down by a federal judge.

"Similar material, photos and videos were provided by the Trump campaign during our case in federal court and were insufficient in providing proof of voter fraud or any legal basis to do away with drop boxes," Shapiro told The Times. "Trump's case was dismissed on all claims."

Trump has particularly focused on Philadelphia, urging his supporters at the first presidential debate to "go to the polls and watch very carefully," because "bad things happen in Philadelphia."

Some supporters appear to have taken that call seriously. Officials in Florida are investigating an incident where two armed men claiming that they were hired by the Trump campaign set up a tent outside of a polling site this week. The campaign denied any involvement.

Minnesota has also launched an investigation after an out-of-state security firm sought to hire former U.S. Special Operations personnel to patrol polling places in the state.

State attorney generals have grown increasingly concerned that Trump's rhetoric is encouraging his supporters to break the law.