In her new Showtime film, the documentarian captures a nation divided and distracted by tech-enable narcissism 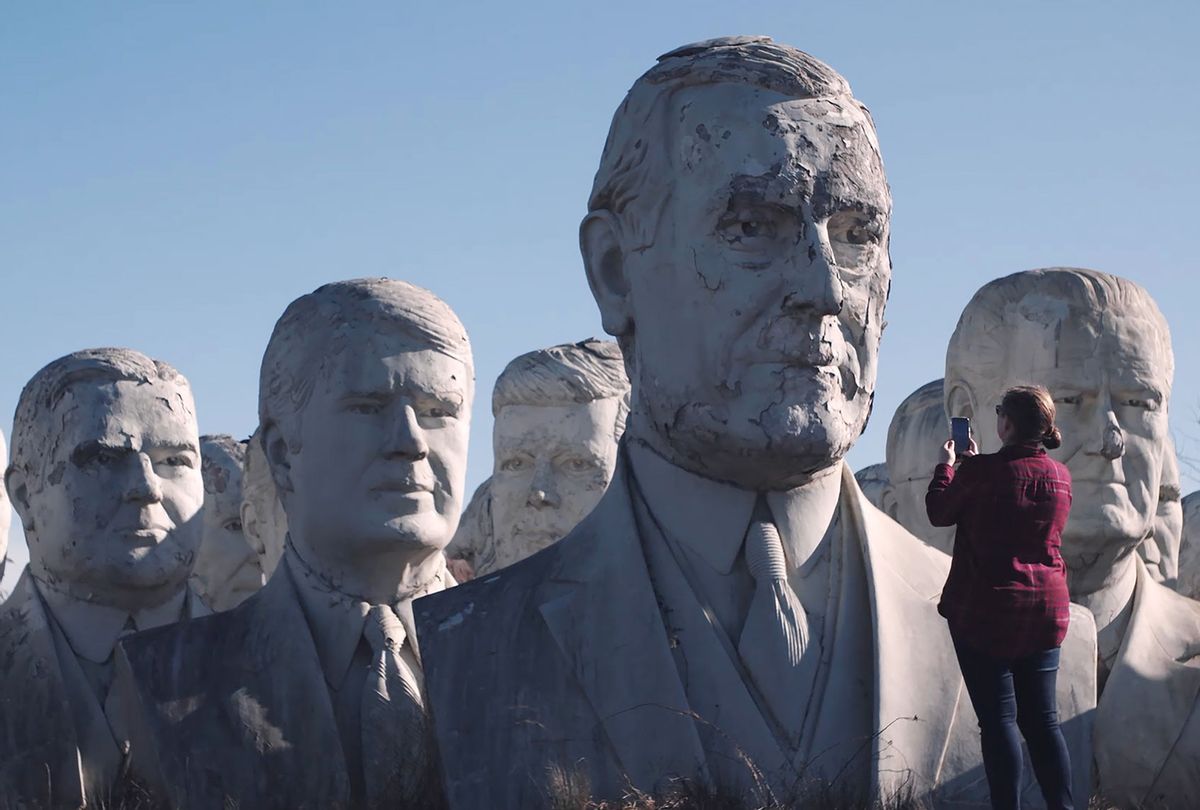 How does America look to you right now? Filmmaker Alexandra Pelosi poses this question in various ways to different people she interviews in "American Selfie," her latest documentary chronicle of the American experience from across the political divide. The answers she gets in return all vary. None of them are bright and sunny.

"It looks like the end of days. I mean, Rome's burning. The system's broken, and it's all around us," says a masked San Francisco resident, eyeing the abandoned streets and uptick in homelessness during the early springtime's quarantine.

"It makes me feel like it's evil. That's about it," offers a man from La Cruces, New Mexico in late 2019 as he visits the El Paso, Texas Walmart where a white nationalist gunned down 23 shoppers in August of that year, egged on by Donald Trump's threats of an "invasion" at the southern border of the United States. Or as another man at a more recent rally puts it, "America's trying to find itself, but it's too late. We're heading for a bad crash, baby."

"American Selfie" is one of those documentaries that one suspects Pelosi envisioned as a capturing the nation at a specific point in time and filtering it through the lens of our culture-wide narcissism. It begins with a bunch of young people merrily taking selfies at the famous Cloud Gate sculpture in Chicago's Millennium Park in September 2019 and ends on a note of despair at the hunger and want exacerbated by the pandemic, and the insurmountable divides created by the fault lines of race, class, gender and partisanship.

While its importance as a chronicle of our present moment is undeniable, it's also incredibly stressful to watch right now because of everything Pelosi captures and the connections she makes from our gleeful consumerism to our willful benightedness about the world collapsing around us. The terrifying part about this documentary is that it's highly likely that any American who watches will recognize a version of themselves in here – and Pelosi doesn't put a pretty filter on any of what her camera captures.

Neither does she judge what she witnesses and questions, such as when she talks to a woman waiting in line to be among the first to score the latest iPhone on the same days as a climate march. Big day, she points out, then asks the woman if she plans to attend the march afterward. Probably not, she answers. "I'm not there yet. It's not what I think about, and I'm not educated there," she muses, staring into her phone all the while.

This jumps to the climate march where activists mourn our needless consumerism and the waste it produces, before leaping to other protests by Trump supporters demonstrating against Minnesota congresswoman Ilhan Omar and another group of demonstrators supporting her. By swiftly moving from city to city and between moments that portray our politics in action, "American Selfie" becomes a depiction of capitalism strangling democracy.

The despair over the Wal-Mart shooting melts into the giddy elation of shopping on Black Friday; the protester's rhetoric about immigrants overtaking the nation is contrasted by a view of the international bridge between Mexico and America where asylum seekers sleep on concrete and under plastic bags.

"Where are all the Christians that talk about helping people?" an activist asks, "Because this can't go on."

The daughter of House Speaker Nancy Pelosi has spent the last two decades touring America's political psyche with a sense of curiosity and usually her most fascinating and empathetic work is set in Republican camps.

Her Emmy-winning 2000 documentary "Journeys With George" invited the viewer to tag along with her and George W. Bush for 18 months on the campaign trail leading up to one of the most contested elections in modern history. Later she recorded John McCain's unsuccessful White House run in 2008 and recorded a marked difference in emotional tenor among conservatives, a tone shift from spirited rivalry to out-and-out rancor.

But "American Selfie" marks a shift in her view and in our politics. Pelosi doesn't embed herself with the power brokers this time, choosing instead to throw in her lot and use her camera lens to give voice to the people impacted by their politics. By encapsulating her approach within a space between September 2019 and recent months, the footage could be seen as a useful predictor of the social ingredients that led to America's anger boiling over in the wake of George Floyd's murder.

Prior to the pandemic's lockdowns the scenes she captures already depict several Americas, the version enjoyed by wealthy and mostly white Americans, and the one in which the poor scrape by or are scraped off of the streets. Gleeful lockdown protests populated by Trump supporters insisting that the pandemic is a hoax are cut through by footage of bodies stacked inside refrigerator trucks in Harlem, recorded in May 2020 in as the New York borough was still being ravaged by COVID-19.

Just in case we don't fully understand the disconnect, Pelosi ends the documentary with a scene of an Independence Day celebration at Mount Rushmore, with Trump and Melania watching the fireworks while Native Americans protesters are pepper sprayed and arrested outside its entry to the choral strains of "American the Beautiful."

That said, if "American Selfie" comes off as a more helter-skelter in its first half that the second, perhaps this is because Pelosi may have begun with a very different thesis, which is that our devotion to recording our every move using cell phone cameras leads to complicated outcomes, both for individuals and society as a whole. The camera has  a way remove us from our connection to specific time and place; we'd rather record evidence of being in where we are instead of actively enjoying the experience of being.

In turn this creating a virtual wall between whatever it is that we're filming and ourselves; one small device can transform us into dispassionate observers. This stark observation is shown in action in scenes like one taken during her January filming in Las Vegas, where a carefree tourist poses for a photo in front of a fountain while ignoring a homeless person huddled against an elaborate set of balusters nearby. The moment follows an extended conversation with several residents who admit they don't feel safe there, largely because the city behaves as if the mass shooting by the Mandalay Bay in 2017 never happened.

However, if this is the documentary's initial viewpoint it is quickly transformed by racial justice protests that broke out in cities over the summer, where cell phone recordings of clashes between protesters and police awakened the American public about the prevalence of police brutality.

"Thank god for cameras on cell phones," one man observes.

"American Selfie" proves that there is no unifying viewpoint that American citizens can agree upon. That has always been the case, but the scarier thought that Pelosi captures in action is that we no longer appear to be able to see the world from the perspective of people who don't share our views. Wisely she remains off camera and asks questions that at times sound naïve or even irritatingly oblivious, until one understands that these are meant to elicit a certain kind of truth in the respondent, not just in their words but in their emotional reactions.

When at Super Bowl LIV she asks a Black man if all men are treated equally in this country, his response is to ask her with a note of anger in his voice, "Are you serious?" The subtext is that she should know better than to even ask that question. The reason this film exists is that so many people don't.

"American Selfie: One Nation Shoots Itself" is available on Showtime On Demand and Showtime Anytime.