Is herd immunity even possible? New public health data calls that into doubt

Many politicians have staked their reputations on herd immunity. What if it isn't possible? 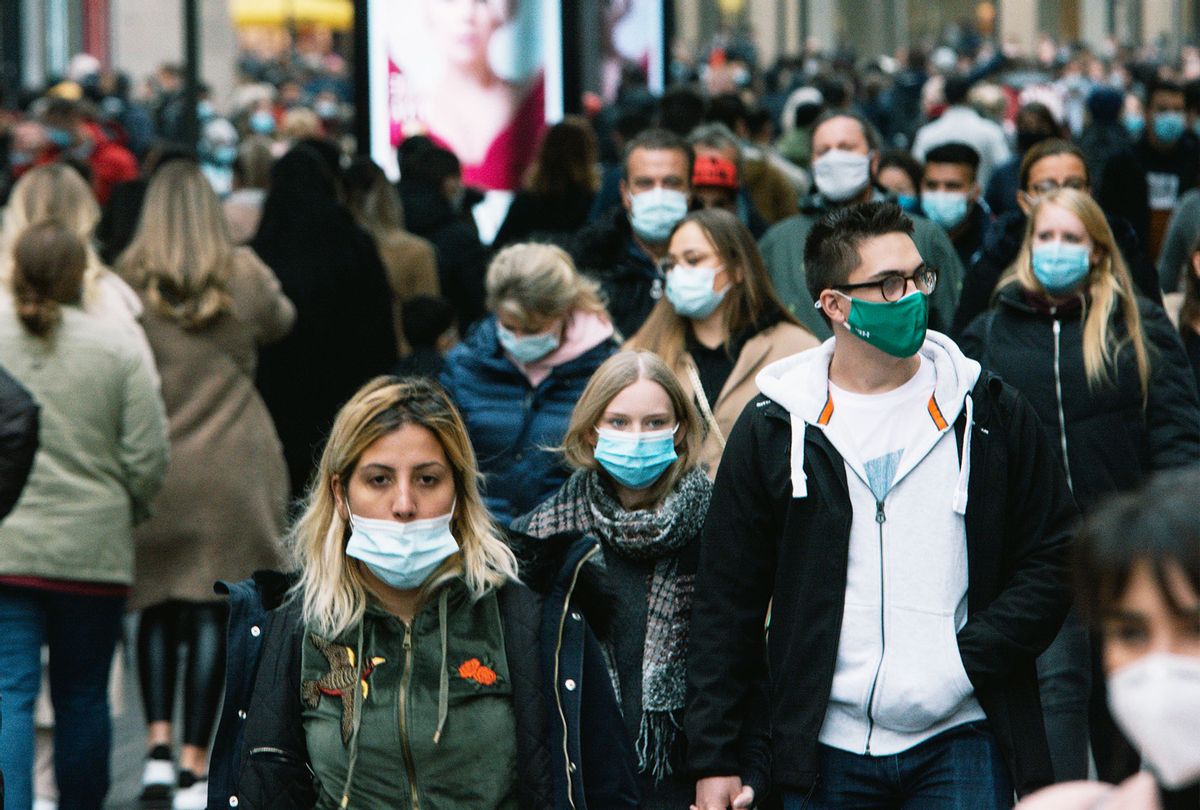 Crowd of people with face masks walking in the shopping block in Cologne, Germany, on October 17, 2020 as NRW state mandate face covering in most of city center areas (Ying Tang/NurPhoto via Getty Images)
--

Political leaders including UK Prime Minister Boris Johnson and President Donald Trump have at times touted a pandemic mitigation strategy of attaining "herd immunity" — meaning the point at which enough people have been infected and then recovered from coronavirus infection that they can no longer spread the virus. Given the death rate from COVID-19, some critics have described such strategies as "genocidal," in that they sacrifice lives that might be saved through quarantine and social measures like paying people to stay home.

Now, a new study reveals that there are biological barriers that may make it very difficult to achieve for human beings to develop herd immunity against the novel coronavirus. The finding has massive implications for public health measures around the world.

Researchers at the Imperial College London studied roughly 365,000 people between June and September through three rounds of finger-prick testing, according to the college's website. (The study has not yet been peer reviewed). Instead of people developing more antibodies during that period of time, which their immune systems would then use to fight COVID-19, the REACT (Real-time Assessment of Community Transmission) study found that antibodies fell by roughly 26% during the period in question.

"This very large study has shown that the proportion of people with detectable antibodies is falling over time," Dr. Helen Ward, one of the study's authors and professor at Imperial College London, told CNBC. "We don't yet know whether this will leave these people at risk of reinfection with the virus that causes COVID-19, but it is essential that everyone continues to follow guidance to reduce the risk to themselves and others."

The study verifies an observation that other studies have shown, namely, that infection with the coronavirus may not confer "durable immunity," meaning long-lasting immunity, on patients. While the immune system develops antibodies after clearing an infection, it does not always continually produce those antibodies; over time, it forgets how to detect some foreign bodies while it remembers others for a lifetime. This is why some vaccines, such as those for mumps and pertussis, lose their effectiveness over time and require re-vaccination.

This study has ominous implications for those who believe the pandemic can be brought to heel through herd immunity. Herd immunity — as Dr. Justin Lessler, an associate professor of epidemiology at Johns Hopkins Bloomberg School of Public Health, told Salon last week — "is the indirect protection we get because people around us are immune to the disease. The basic idea is if there are fewer people around me who can get sick, then there will be fewer people around who can infect me, so I will be less likely to get infected even if I am not immune to the disease myself."

He added, "Herd immunity is a more general concept, but when people use the term they often mean herd protection; which is the point where there is so much immunity in the population that a community would not be able to start an epidemic if someone in that community got infected."

If people are not producing more antibodies to fight COVID-19 after being infected, the possibility of herd immunity drops significantly. This is also why it is important for people to be vaccinated if a safe and effective drug is developed. As Dr. Georges Benjamin, executive director of the American Public Health Association, told Salon in May, "We very clearly know that, if we don't get 70-something percent of the population covered, we will probably not get to herd immunity."

He added, "There are some people that think that, with this virus, we might be able to achieve it with 50 percent, so that's not 100 percent. But I'm thinking that 70-something percent is about where we need to be, and it's because I've looked at some of the data. We may achieve it with 50 percent, but the bottom line is we'd run the risk of not getting herd immunity with the vaccine."

Of course, even testing positive for antibodies is no guarantee that one is immune.

"Testing positive for antibodies does not mean you are immune to COVID-19. It remains unclear what level of immunity antibodies provide, or for how long this immunity lasts," Dr. Paul Elliott, one of the study's authors and director of the Real Time Assessment of Community Transmission program at Imperial College London, told CNBC.

"If someone tests positive for antibodies, they still need to follow national guidelines including social distancing measures, getting a swab test if they have symptoms and wearing face coverings where required," Elliott added.