Everything is terrible right now, but if you need an hour that relates to your terror, this special is it 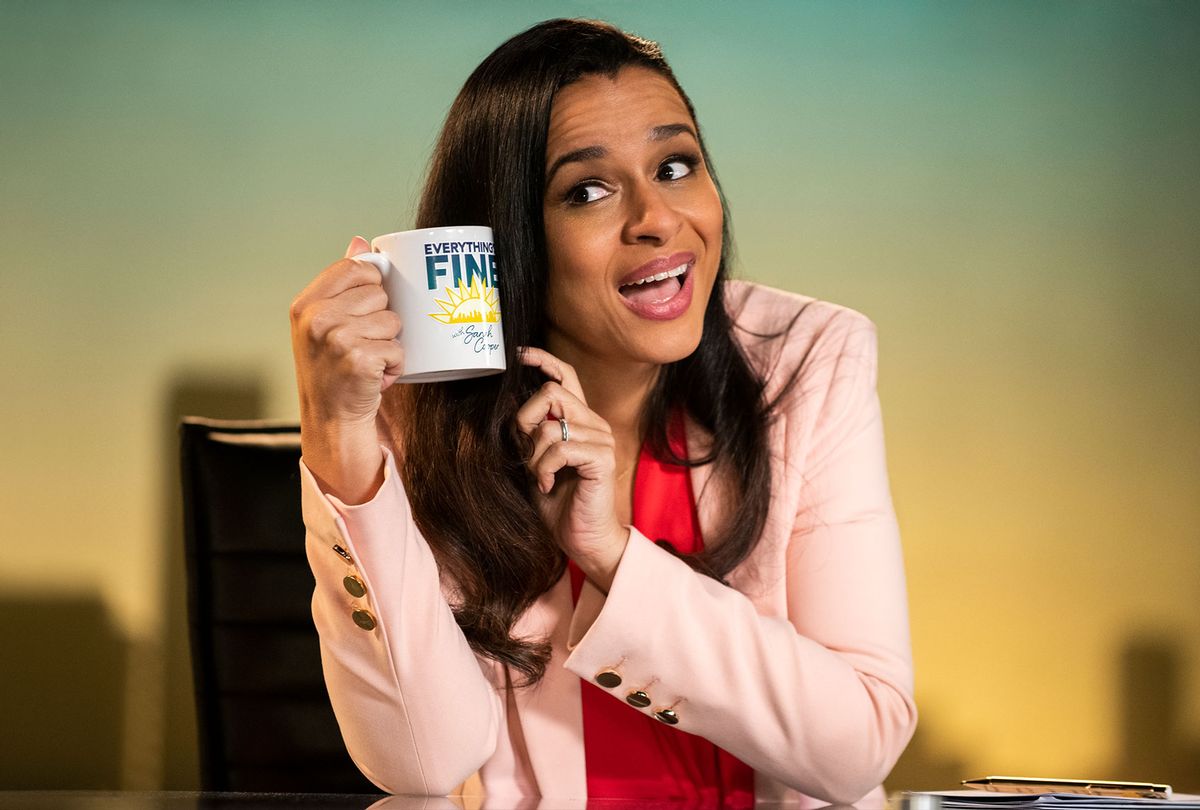 No comedian with a soul would say that the last five years of Donald Trump has been good to them. (Yes, it's been five! The Golden Escalator of Doom happened in 2015!) Nonetheless, and against all odds and reality itself, Trump's reign of terror has yielded an excellent silver lining in Sarah Cooper's emergence and ascent.

As the pandemic dropped on us like a hammer, Cooper's expressive TikTok lip-syncs to Trump's dumbest public ramblings made her a viral sensation. Now her Netflix special "Sarah Cooper: Everything's Fine" seeks to release some of the pressure we're collectively feeling with less than a week to go until Election Day.

Happily for everyone involved and the audience, it works. This is in no small part due to Cooper knowing her audience's expectations and limitations.

At a scant 49 minutes Cooper and director Natasha Lyonne ("Russian Doll") combine sketch comedy with all-star celebrity power and funnel all of it through the conceit of a sunny morning TV program in which the host, Cooper, is slowly being driven mad by having to smile her way through a slowly moving apocalypse.

The show within a show is relentlessly optimistic, light, and full of commercials targeting an audience that despite all the misery unfolding around it only wants to be happy. The special, meanwhile, functions as a coming out party for Cooper and an all-star pre-election event to shame Trumpworld's many devils with laughter. That makes "Everything's Fine" less of a relief or an escape than it is an acknowledgment that no, you're not dreaming this reality, it's really happening and it's crazy-making.

Jon Hamm gets a lot of mileage with his loose impersonation of My Pillow founder Mike Lindell, but probably not as much as executive producer Maya Rudolph's turn as a weathercaster attempting to calmly report the violent day-to-day changes between hellscape heat and sub-zero conditions. Fred Armisen, another familiar face, functions as Cooper's morning show producer. He hides under progressively heavier layers of COVID-resistant personal protective equipment as the hour passes. Jane Lynch drops by for a baking segment that evolves into a Ken Burns-tinged historical exploration of 2020's most recognizable and reviled female archetype.

Cooper's charisma and her outstanding ability to convey Trump's obscene ineptitude through physical performance ensure that these gags land. However, and smartly, Lyonne and producers don't rely too heavily on the impersonation aspect Cooper's brand with which most of us are familiar. There's a share of that, but mainly "Everything's Fine" shows us Cooper's natural talent.

But the special truly excels in using the morning show situation to depict what professional women like Sarah Cooper contend with in the real world and more to the point, in the type of workplace environment we're watching her endure. In this respect "Everything's Fine" isn't solely a send-up of 2020's woes but a sharp side-eye at all of the social events that brought us to this current point in time.

Some of this is achieved through celebrity stunt casting, such as when Cooper and her producers find a way to collide the expanding threat posed by artificial intelligence with the #MeToo movement in a character played by Ben Stiller in one segment. Aubrey Plaza pops up as a QVC host who may or may not be the mythological "Q" conspiracy theorists worship.

But wait – there's more. We also get appearances by Megan Thee Stallion, Marisa Tomei and Winona Ryder! And the voice of Whoopi Goldberg! The caliber of this parade demonstrates how beloved Cooper is among the comedy and Hollywood powerhouses who can, you know, get this woman her own show. (Which is in development, by the way, at CBS.)

But the bits that exceed those in potency take Sarah Cooper, daytime host through the same irritating workplace paces that Sarah Cooper, former Google employee surely faced at her previous work place. In one segment she's chastised for seeming angry and aggressive which she counters by shrinking herself behind her smile.

This results in her being penalized for confusing people who don't realize she's Black. "I think it might be a little confusing because, you know, I'm named Sarah," she says, "and I feel like when my parents named me Sarah, a white lady just moved into my body and gentrified my entire personality!"

If real Sarah feels that way, that explains how and why she's so effective at claiming the personalities of people who are nothing like her – Trump, Kellyanne Conway and Ivanka being a few – and beaming them back to us so convincingly and with an overt sense of ridicule.

The piece de resistance of "Everything's Fine" places Cooper inside that fateful "Access Hollywood" bus ride we all listened to in October 2016, only in 2020 her Trump is joined by a version of Billy Bush as played by Helen Mirren. It's a masterful, multilayered bend with a Black woman casting herself as the nation's most famous sexist bigot playing opposite a refined British thespian goofing around as a C-lister entertainment magazine host.

Mirren and Cooper seems positively intoxicated with glee throughout a scene that ends with the chef's kiss of "Queer Eye" star Jonathan Van Ness stepping into the role of Arianne Zucker, the woman Trump and Bush repellently objectify in that audio snippet. The "Access Hollywood" tape didn't prevent Trump from winning the presidency, but in their recreation the actors invite us to reclaim the preposterous dark humor beneath the horror of that tape.

"Everything's Fine" alludes to a meme that has come to define the Trump's presidency: that of a smiling, saucer-eyed dog sipping from a mug as the house he's sitting in burns down around him. "This is fine. I'm okay with the events that are unfolding currently," he says, holding to his claim until his arm catches fire and his skin melts off.

Cooper's special is a live-action rendering of this feeling, delivered to us precisely when many of us see an exit through all the smoke and are scared to lurch toward it nevertheless. And while it won't put out the fire it at least acknowledges that we're not OK – and it's perfectly fine to spend an hour laughing at the madness of it all.