Welcome to a failed state in slow motion: The United States of America 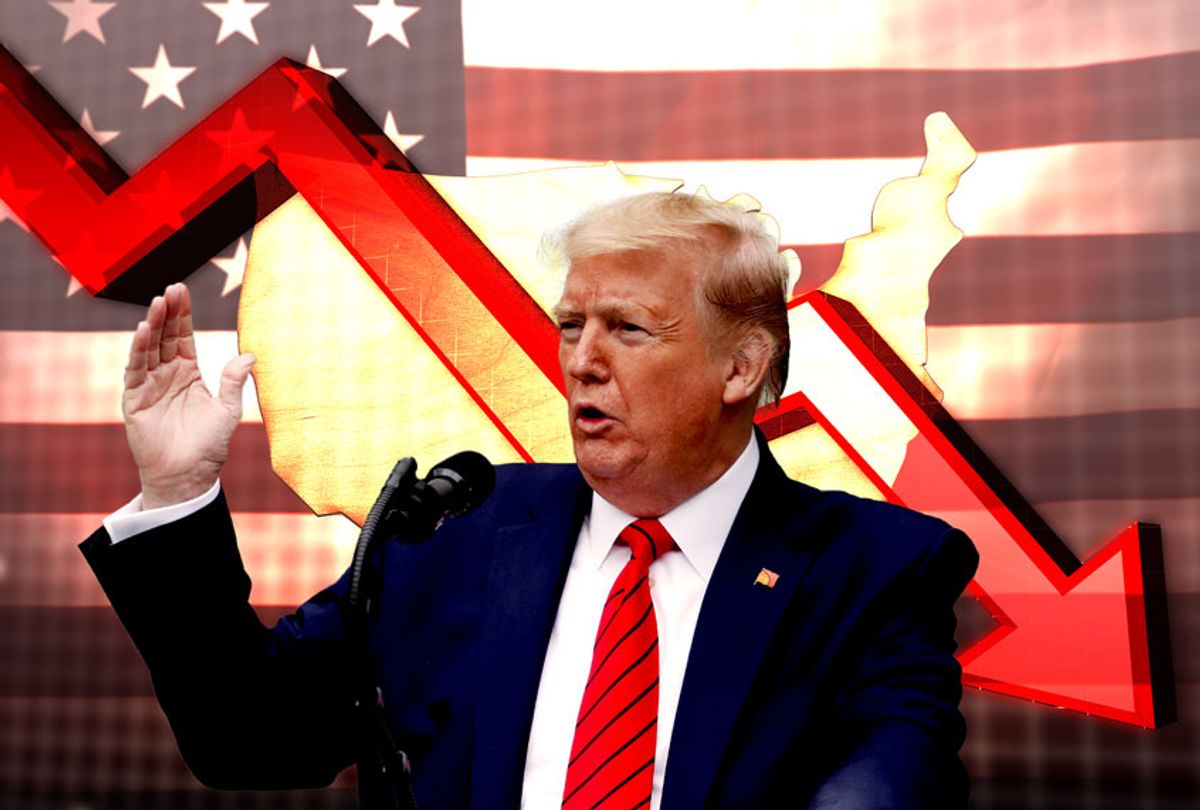 What is a failed state? It's a country that would hire me to make things work.

I learned that the night I made the trip between Kabul and Jalalabad. The main trading route between the countries of Afghanistan and Pakistan was how virtually everything needed in Afghanistan was shipped into the country, from automobiles to food to medicine to fuel to people. You would think that a road carrying such essential trade would be well-paved and cared for, protected by a strong police presence and lined with gas stations, restaurants and motels, the kinds of businesses ordinarily found along such routes.

But in the failed state of Afghanistan, you would be wrong. It was a dusty, potholed dirt road strewn with gigantic boulders (some the size of small cars), lined with fields of unexploded mines, packed bumper to bumper with every means of conveyance known to man, from donkey carts to farm tractors to taxis to interstate buses to tractor trailers. It was a 10-mile-an-hour road, 70 miles from the capital of Afghanistan to one of its most populous cities that typically took seven to eight hours to drive.

I was riding in a kind of mini-SUV, accompanied by a driver, a translator and a photographer. We had had trouble procuring the car, so we were late departing Kabul, leaving in the mid-afternoon. The traffic was fierce and the road was rough, so bad we frequently had to get out and help others move rocks and boulders out of the way. The sun had gone down behind the rock-strewn mountains on either side of the road when we reached the Kabul River gorge, a deep canyon through the mountains where the road dropped about 3,000 feet in altitude within a couple of miles.

Just as we reached the first of many, many switchback turns down the side of the gorge, we stopped. Ahead of us were hundreds of cars, buses and trucks jammed together crowding both sides of the road. Nothing could move. We could tell they had been there awhile because truck drivers were already out of their cabs buying firewood from little boys to cook their dinners with. Several had laid out sleeping bags beneath their trucks. They were settling in for the night.

I got out and walked over to the lip of the gorge where I could see several thousand feet all the way to the bottom. The road was jammed through switchback after switchback, nose to tail, at least a couple of thousand vehicles. I got my translator and we walked over to ask a nearby trucker if he had been in a traffic jam along this stretch of bad road before. "Many times," he answered without any emotion at all. Asked how long the similar traffic jams he had been in had lasted, he said, "Two, three days. Sometimes longer."

I looked around. A crowd was gathering. They were gathering around me. I studied the faces of people who had dismounted from taxis and buses and trucks. There were no policemen, no soldiers from the Afghan army (or the U.S. Army, for that matter). I was the only American there.

It began to dawn on me that if I spent the night in the gorge, I wasn't going to make it out alive. So I grabbed my translator, whose name was Esos, and I got out my binoculars and I made a study of the traffic jam just as darkness set in. There was a way to get the jammed-up cars moving. What we had to do was free up the switchback turns, one by one, by getting the vehicles going in each direction to back up from the jammed corners enough to let a few vehicles through, and then move everyone who was going east towards Jalalabad far enough to the side of the road to allow the westbound traffic through.

I explained the plan to Esos, and he enlisted the help of an old man who was wearing a tattered Afghan army uniform and hat, and we started by moving a string of tractor trailer trucks back from the apex of the first switchback turn. Once it was free, we began moving the eastbound cars out of the way. I took a flashlight and jumped up on a boulder and began directing traffic. Not knowing any Pashto or Dari, I started yelling "Bongo-bongo-bongo!" as I waved the flashlight. The traffic started moving slowly to the west. It was like a miracle! A cheer went up, and people pointed at me atop the boulder. A bus driver approached Esos and asked him who I was. "That is General Bongo," Esos said. "He is an important man from America."

It took about seven hours, but we undid that traffic jam. Near the bottom, we found two gigantic trucks carrying some kind of steel oil tanks jammed in the opening to a tunnel. We moved them out of the tunnel entrance to the side of the road and kept working on the jam along the Kabul River at the bottom of the gorge. We finally made it into Jalalabad around dawn.

We spent the next week in the badlands along the Pakistan border. Everywhere we went, people had heard the tale of a miraculous American who untangled the jam in the Kabul River Gorge, General Bongo. They gathered around me in villages we stopped in. "Is that General Bongo?" they would ask Esos. "Yes, it is General Bongo," he would answer, proudly introducing me. Apparently, the jams in the gorge were notorious in eastern Afghanistan, and nobody had ever heard of one undone in a matter of hours, instead of days.

As we explored the outlaw area between Jalalabad and Asadabad, a smuggling town to the north just a couple of miles from the border with Pakistan, we encountered more evidence of a failed state: There was no clean water; open sewers ran along the roadside; one village after another was controlled by rival warlords; marauding bands of thieves stole goats and sheep and donkeys from local farmers. Filth and disease were everywhere: Cholera, staph infections, deadly pneumonia and even polio. There was no electricity. There were no hospitals. Every town was ruled by a different tribal warlord. People were forced to grow poppies for opium instead of wheat and food crops. The road from Jalalabad to Asadabad was, incredibly, even worse than the other one, a five-mile-an-hour road. After a few days driving it, our shocks failed, leaking fluid all over our brakes. We had to have practically the entire suspension of the car repaired in Asadabad.

On our last night, the mayor of a small village we had visited stopped us on the road. He took Esos aside and they talked for several minutes. When he returned, Esos explained that his village had met and agreed to offer General Bongo an empty walled compound in the village along with goats and sheep and several donkeys. I could take as many wives as I wanted, and I would have my own militia, made up of local villagers who had armed themselves against the Taliban.

At that moment in my life, I was a failed screenwriter in Hollywood who hadn't made a deal for a script in more than a year. In Afghanistan, because I had untangled an impossible traffic jam in the Kabul River gorge in a matter of hours, I could be a warlord with my own army.

That is what a failed state is in the third world.

Back here in the so-called first world, we are almost there. Just look at the news from the last couple of weeks. Wearing a mask to guard against the coronavirus has become a tribal issue, with people refusing to wear them out of a sense of identity politics. Incidents of violence and even a shooting death have occurred over masks. Donald Trump is still promoting a drug that has now been proven to cause deaths when used in cases of coronavirus infection. Madness surrounds us.

Our national response to the pandemic hasn't been national at all. Lockdowns and social distancing have been state by state, county by county, city by city, business by business. The so-called "blue states" have responded one way, the "red states" another. People are not acting with a sense of what the consequences are. One tribe is saying, Your freedom ends where my health begins, and the other tribe is saying, The hell with your health! Freedom! Liberty!

All of it over whether or not to wear a goddamn protective mask.

With heavily armed men in full combat gear occupying the visitors galleries in the Michigan state capitol, we are one trigger-pull away from what happens every day in places like Kabul and Mogadishu and Tripoli. With tens of millions of people out of work, they're talking about cutting food stamps and canceling the unemployment bonus they just passed. Every day, there is more evidence that nothing is working the way it should in a country gripped by the biggest crisis it has faced in decades.

An op-ed in the New York Times on Wednesday was titled, "The Worst is Yet to Come." Columnist Farhad Manjoo made the case that "every problem we face will get much worse than we ever imagined. The coronavirus is like a heat-seeking missile designed to frustrate progress in almost every corner of society, from politics to the economy to the environment … indeed, division and chaos might now be the permanent order of the day."

With close to 100,000 dead and counting, we need a General Bongo and we don't have one. I'm retired, and it's five and a half months until the November election.

Build your cooking fires, wear your masks and hang on tight. We are in the jam of our lives.