In the last days of the campaign, Trump wallows in his contempt for his supporters

It's no surprise that Trump thinks his supporters are a bunch of morons. Now he isn't even pretending any longer 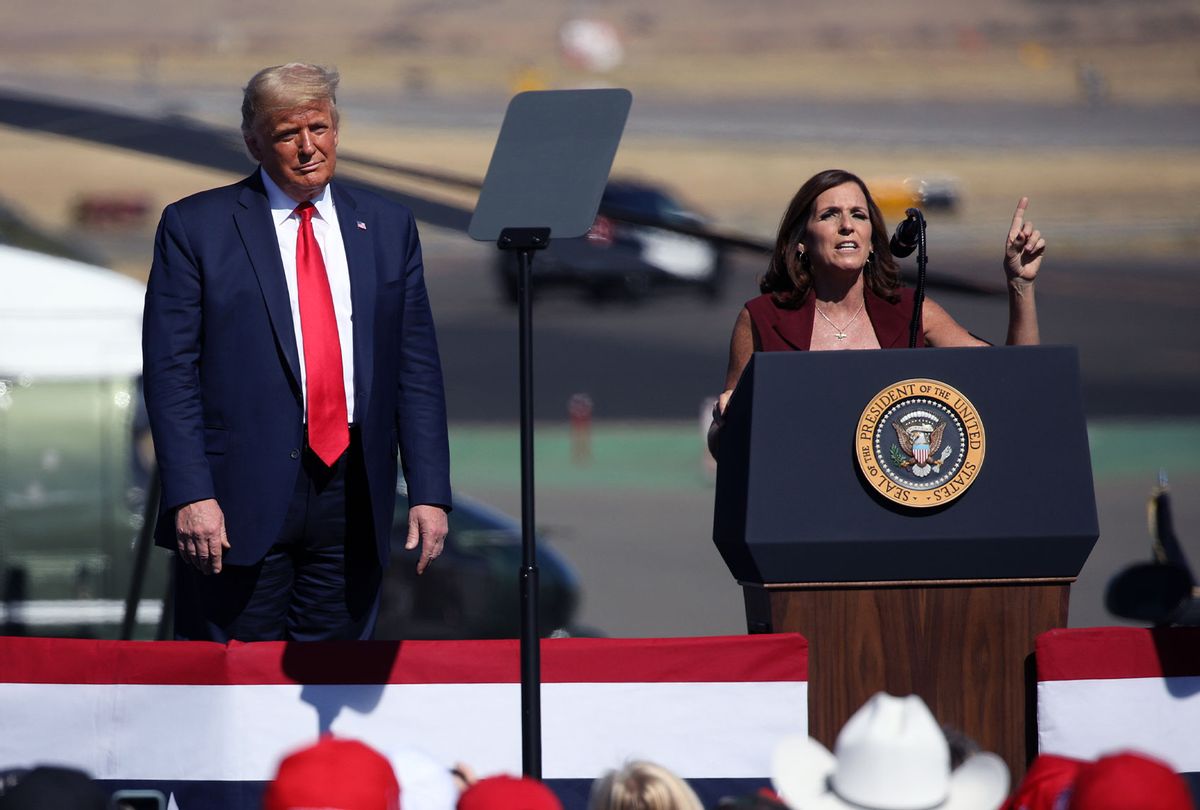 Sen. Martha McSally, an Arizona Republican, has paid her bootlicking dues. She's repeatedly gone out of her way to show obeisance to Donald Trump, most famously in January when she yelled "liberal hack" repeatedly at a CNN reporter who asked her if the Senate should consider evidence before rushing to acquit Trump during his impeachment trial.

But despite years of bowing and scraping and, of course, voting to acquit Trump despite his obvious guilt, McSally has earned no loyalty in return from her orange master. She's in a tough race against former astronaut Mark Kelly, a Democrat, and has consistently trailed in the polls. At a recent Arizona rally, Trump didn't  bother to hide his disdain for McSally's standard political desire to address her own potential voters.

"Martha, just come up fast. Fast. Fast. Come on. Quick," Trump barked at her. "You got one minute! One minute, Martha! They don't want to hear this, Martha. Come on. Let's go. Quick, quick, quick. Come on. Let's go." It was clear that, as always, Trump resents every moment when the spotlight's not on him, even in the context of helping a sycophant.

That moment went viral, since cringeworthy is the emotional fuel of the internet. It also illustrated of one of the most frustrating aspects of Trumpism: Trump treats his own supporters as a pack of morons, but they don't seem to mind and keep on adoring him anyway.

This was most profoundly demonstrated by a bizarre video from a rally in Erie, Pennsylvania, last week, when Trump complained to the crowd about the indignity of even having to visit their city.

"I wasn't coming to Erie. I have to be honest. There's no way I was coming. I didn't have to," Trump announced. "And then we got hit with the plague, and I had to go back to work."

(Like most things Trump says, this is not true. Former Vice President Joe Biden's lead over Trump in the polls — both nationally and in Pennsylvania, a crucial swing state — has been stable since before Biden was officially running.)

But what's wild about this video is how the crowd reacts to Trump's lengthy diatribe about how he doesn't even want to be there: They laugh and cheer, lapping it up as he insults them right to their faces.

It's such a weird reaction that CNN host Don Lemon aired a supercut of Trump complaining at various rallies that he didn't even want to be there.

"I may never have to come back here again if I don't get Iowa," Trump told a crowd in Des Moines.

This bit, which he repeats ad nauseam, is Trump's apparent closing argument: Since he lowered himself to speak directly to the hoi polloi, the least they can do is vote for him. In order for the joke to work, you have to accept Trump's premise that his supporters are scum and he taints himself by having to speak to them.

Despite Trump's insistence that he hates holding his rallies, of course, the truth is that he's hopelessly addicted to them and their main purpose to feed his ego. They probably aren't helping his campaign.

As Susan Milligan at U.S. News and World report pointed out this week, polling suggests that "voters in battleground states do not approve of Trump's largely maskless, packed rallies."

Trump sees his own supporters as dupes. He revels in their adoration, but can't even pretend to return the feeling. Being a sociopathic bully, he revels in rubbing their noses in the fact that he sees them as idiots.

A recent incident in Omaha, Nebraska, became an almost too-perfect symbol of this relationship between Trump and his supporters. Buses that were supposed to come pick up supporters after a rally failed to materialize, leaving hundreds of people — many of them elderly — stranded in the cold. They had to walk long distances back to their cars, and multiple people were taken to the hospital after exposure to the freezing temperatures.

That Trump loathes his own fans isn't a great mystery. As The Atlantic dutifully reported in two articles in September, Trump routinely makes fun of Christian conservatives behind their backs and called fallen soldiers "suckers" and "losers." All we need is a story about him making fun of dumb cops and we've hit the trifecta of Trump mocking the constituent groups that are the most faithfully Republican.

The irony of this is that the right-wing media has stoked their audience's hatred for liberal voters, Democratic politicians and mainstream journalists for decades by claiming that such people are a "liberal elite" who look down their noses at "ordinary Americans," especially conservatives. Night after night, Fox News solemnly declares that its audience is victimized endlessly by this supposed snobbery, even though there's usually little or no evidence to make the case. This narrative of liberal contempt and conservative victimization permeated Republican talking points during the Amy Coney Barrett hearing, with one GOP politician after another feigning outrage at the imaginary attacks on Barrett for being a devout Catholic and having a big family, without producing a shred of evidence that any such attacks had ever happened.

While the evidence of liberal contempt for conservatives is thin on the ground, the evidence of Trump's contempt for his own supporters is delivered to us via firehose. He insults his voters right to their faces. He sneers at Republican politicians who support him. He cares so little for his most fervent supporters that he repeatedly imperils their health with his rallies, not to mention the Barrett nomination party at the White House that led to more than two dozen Republicans getting sick with COVID-19.

Trump gets away with this because Republicans have treating their own people like a bunch of suckers for years, which is why right wing media is awash in conspiracy theories and snake-oil salesmen. They get away with it because their marks always assume, like good marks should, that they're in on the con, and that somebody else is the sucker. So when Trump insults his own voters right to their faces, telling them they live in some Podunk burg he hoped he'd never have to visit again, many in the crowd are thinking, "He's not talking about me, but these other yahoos."

In truth, those folks are the biggest suckers of all, imagining that they're the exception to Trump universal contempt. He really does see his supporters as a herd of gullible idiots. By swallowing it and voting for him anyway, they're only confirming his worst assumptions.