Who has the most contempt for Trump voters: Liberals, or Donald Trump? Not even close

Trump believes his followers are a bunch of racist morons. Sadly, a lot of them are eager to prove him right 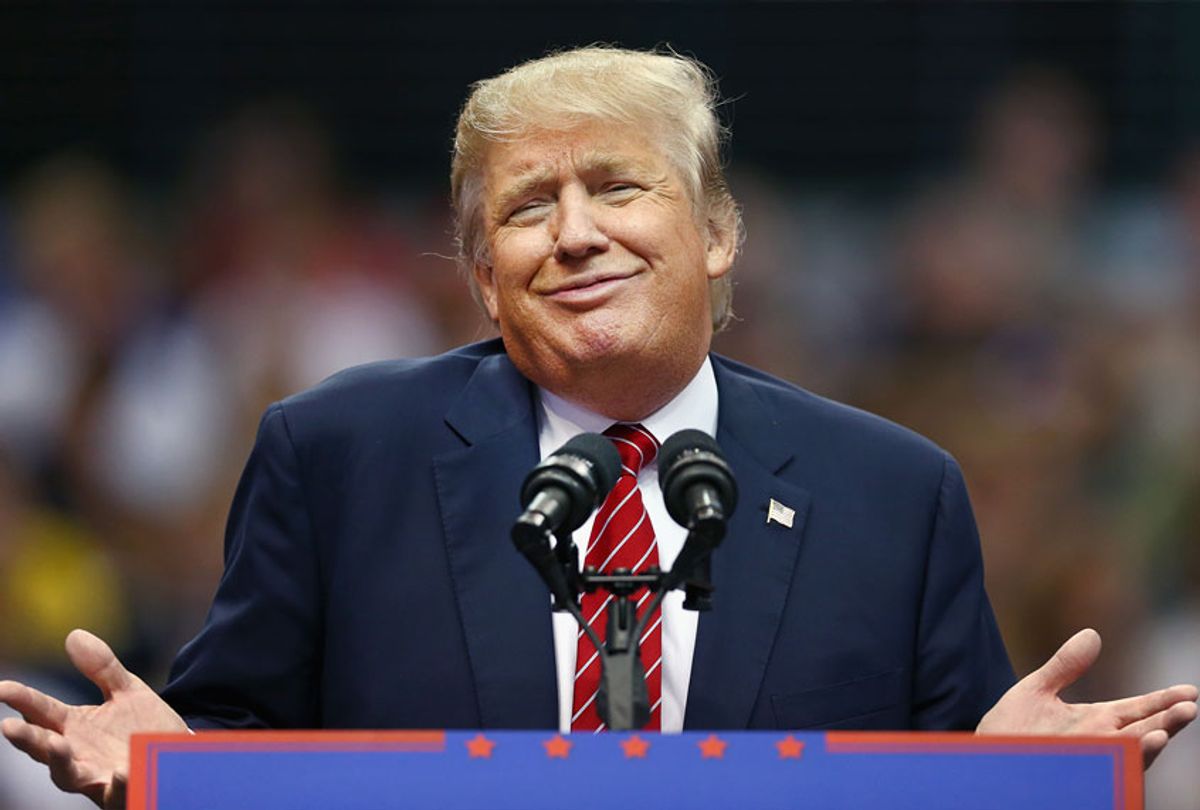 Twitter was once again forced to add a correction to one of Donald Trump's lies. The social media site lets most of the president's falsehoods pass — keeping up with them all is an admittedly inhuman task — but not this latest, in which Trump shared a fake video that was an such an ugly, racist provocation that Twitter slapped a warning label on it to alert viewers it had been "manipulated."

The video Trump tweeted shows a white toddler chasing a Black toddler, along with a fake CNN caption reading "Terrified toddler runs from racist baby." Then it switches to a video of the two kids hugging and playing with the caption, "What really happened." The so-called argument of the video is that CNN is manipulating innocent footage of children playing to leverage false accusations of racism. Of course, CNN did no such thing. The CNN chyron was faked and the only "fake news" is that CNN would ever call a baby "racist." CNN had done a story about the toddlers, in 2019, but it was an innocent, if cloying, fluff piece about their friendship.

This episode, which will likely be as quickly forgotten as so many before it, is another perfect distillation of how not just Trump, but his entire campaign team, is completely void of all human decency and empathy, so much so that they would knowingly exploit images of children, without their parents' consent, to create overtly racist propaganda designed to trick people into rejecting actual news in favor of lies.

The whole episode was also a reminder of an eternal truth of the Trump era: No one — not even the snootiest, Ivy-educated coastal liberal — could possibly feel more contempt for Trump supporters than Donald Trump does.

Think about it: What Trump was saying by tweeting out that video was that he thinks his followers are complete morons, the sort of people so thuddingly stupid that they might believe that CNN would call a baby "racist" or might try to present toddler hijinks as violence.

What is Trump suggesting his voters believe? That Chris Cuomo is, in grave tones, announcing breaking news that a baby is racist? That Don Lemon is going to go on air to denounce baby-racism? That Anderson Cooper may have an emotional interview with the toddler about how he came to have racist beliefs and whether he regrets it? How stupid does Trump think his voters are?

(Sadly, some of Trump's supporters confirmed his low opinion of them, sharing the video as if it were real. Let's leave disentangling that to the mental health professionals.)

Trump voters are driven, in no small part, by ongoing and lovingly-nursed grudges over the belief that a "liberal elite" looks down on them and thinks they're a pack of morons. But the so-called "liberal elite," no matter how much contempt it may feel for Trump voters, has got nothing on Trump himself, who clearly views his voters as a bunch of expendable idiots.

The Trump rally planned in Tulsa, Oklahoma, for Saturday is, of course, perfect evidence that Trump doesn't care if his supporters get sick and die. The rally comes right as coronavirus cases are spiking in the state, and couldn't be better designed as a potential "superspreader" event: People packed in close promixity in an indoor arena, with lots of out-of-state visitors mixing with locals.

In case there was any danger that Trump's rally-goers might take precautions to slow the spread of the virus, Trump himself has been out there making sure they don't take it. While the campaign claims that masks will be available to people at the rally, Trump has repeatedly signaled to his supporters that he expects them to bare their faces as a show of loyalty.

In a Thursday interview with the Wall Street Journal, our endlessly narcissistic president claimed that people wear face masks not to slow the spread of the virus, but "as a way to signal disapproval of him."

Trump himself refuses to wear a mask in public, and has deemed masks to be "politically correct," which is as good as telling his supporters that wearing a mask will make your testicles fall off. He will not want rally photos to feature masks, which he clearly thinks mars his manly image, and it's likely his loyalists will comply. We're already seeing how mask-rejection has become a loyalty test for Trumpers, as demonstrated by how the movie-theater chain AMC has decided to make mask-wearing optional, rather than deal with tantrums by Trumpers.

Instead of caring about his supporters, Trump is encouraging them to believe they are victims of "Covid Shame" and to feel aggrieved because the "Far Left Fake News Media" supposedly "had no Covid problem with the Rioters & Looters," his preferred way to characterize the largely peaceful Black Lives Matter protests.

That's how much contempt Trump has for his supporters: He literally wants them to compete with anti-racism protesters for the opportunity to get violently ill and possibly die. Which, to be clear, is not what anti-racism protesters actually wanted, which is why most wore masks and held outdoor rallies, which reduced the risks, though certainly didn't eliminate them.

It's not like the George Floyd protests were some kind of playtime activity. That was something people felt compelled to do out of a moral compulsion to fight racism, and the risks — police violence, coronavirus infection — were undertaken not out of casual recklessness, but determination.

Trump assumes that his supporters really are dumb enough to resent leftists for "getting" to risk sickness and so now, neener-neener, it's their chance to show off by going to an even riskier indoor event, mask-free. True to form, Trump's followers are justifying his low opinion of them.

"If protesters are immune from it, maybe Trump supporters are too," one Trump fan told MSNBC before the rally. Of course, protesters didn't think they were immune to the virus, only that protesting racism was worth risk — a risk most tried to mitigate as much as possible.

Beyond the coronavirus concerns, the date and timing of Trump's rally — which was initially scheduled for Juneteenth. in a city that witnessed an infamous race massacre in 1921, when perhaps hundreds of Black residents were murdered and more than 1,200 Black homes and businesses were destroyed — was an obvious racist provocation. Indeed, it was so obvious that the Trump campaign has been scrambling to pretend it was an accident, after initially making clear that the choice of date and location was deliberate.

But despite moving the date back by one day, Trump is clearly still drooling with anticipation that his racist provocation will attract protesters. He recently tweeted: "Any protesters, anarchists, agitators, looters or lowlifes who are going to Oklahoma please understand, you will not be treated like you have been in New York, Seattle, or Minneapolis. It will be a much different scene!"

This whole display shows, of course, that Trump hates people who think racism is bad. But it also shows his contempt for his own followers, who he assumes are so dumb, and so flat-out racist, that they'll be delighted to go along with this grotesque display. Yet again, the president's contempt for his supporters looks to be validated.