Which party wants to gerrymander Virginia? It might not be the one you think

As soon as Democrats got power in Virginia, they changed their minds on partisan gerrymandering. Time to fix that 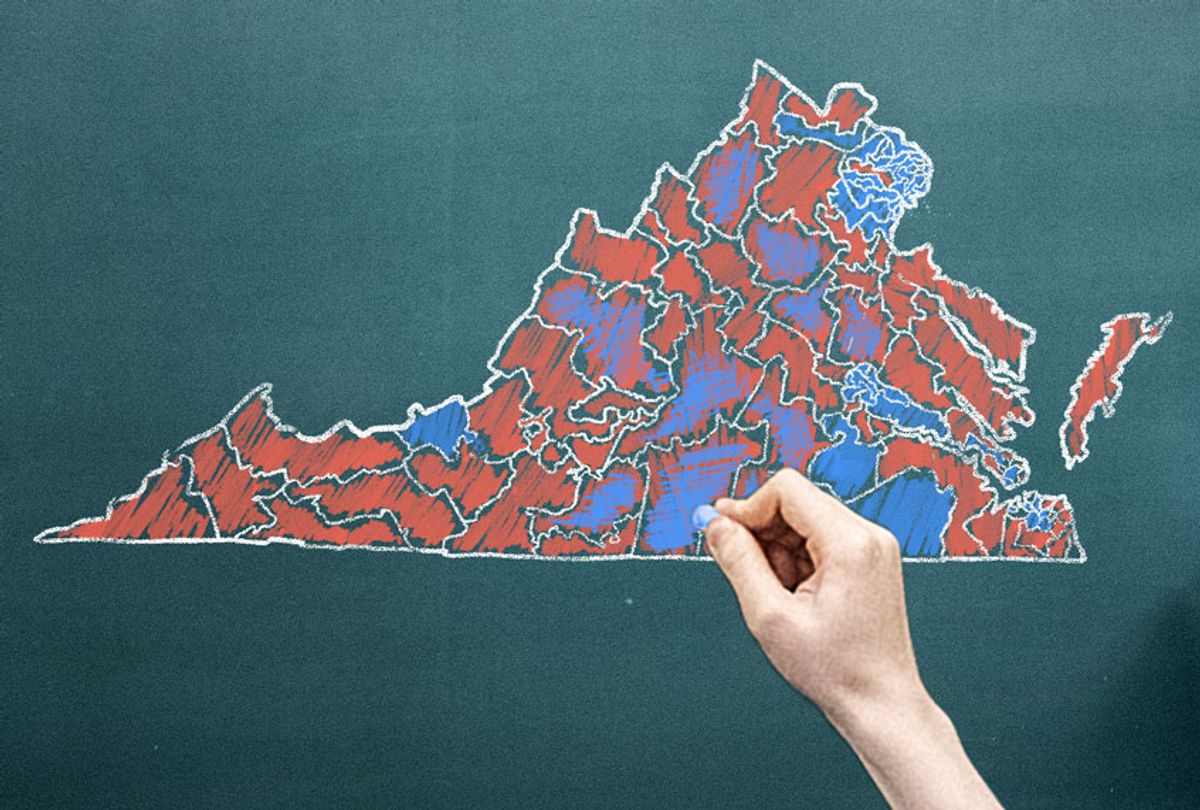 This year, Virginia voters have the rare opportunity to lead the way on making necessary structural change to our democracy by approving Amendment One on the general election ballot. This bipartisan state constitutional amendment will create Virginia's first redistricting commission and would prohibit partisan gerrymandering in Virginia once and for all.

That's the good news. The bad news is that some members of one political party have been stonewalling this progress over the last year. It's probably not the party you think.

Although the history of the 2010 redistricting cycle unequivocally shows that Republicans created some of the most rigged, gerrymandered maps in our nation's history, this time it is some Virginia Democrats who have been the more recent roadblocks as Amendment One has moved toward the voters.

For context, amending Virginia's constitution involves rigorous vetting. An identical version of the amendment must pass through both chambers of the legislature in two consecutive sessions of the General Assembly. In this case, partisan control over the House of Delegates changed hands between the two votes; Republicans held the majority before the 2019 election and Democrats afterwards.

Wouldn't you know it: One month after Democrats won the majority — and with it, complete control over the maps that will be drawn in 2021 if no commission is enacted — some began to publicly express their displeasure over a bill they had supported and even campaigned on just a few months before.

Let's be very clear about the choice voters have: Citizens can have a seat at the table for the first time in Virginia's long history, or the broken status quo stays in place. One party will have the power to draw district lines, in secret, with no transparency guidelines, or eight citizens will be invited into the process.

This Democratic majority has done impressive things on voting rights. But for some, the temptation to control the mapmaking process is apparently impossible to resist.

First, some Democrats tried to kill the amendment while no one was looking. Even though it ultimately passed again in 2020, that happened only after weeks of shameless obstructionism — a breathtaking partisan role reversal that included unexpectedly delaying committee votes and rewriting the entire thing at the 11th hour to refusing to physically give the vote tally back to the Senate as part of a shady procedural move meant to pocket-veto the measure entirely.

Then came the not-so-secret plan to kill it at the ballot box. Since they couldn't win in the General Assembly, some elements inside the Democratic Party of Virginia are actively telling local party committees to reject the amendment this fall. An opposition group made up of party insiders — desperate to lock themselves in power — has formed and is actively fundraising to kill Amendment One.

Imagine the reaction of Democrats if the GOP tried even a fraction of the legal maneuvers and procedural tricks of the past few months. They would rightly cry foul and maintain that the will of the people was being subverted under the guise of whatever excuse seemed popular that week.

This hypocrisy isn't lost on those of us that have been fighting for fair maps — not red maps or blue maps — for the past decade. Many of those on the front lines of Virginia's opposition have said the right thing until it was time to actually do the right thing. They had claimed that they would support different reforms. But it's too late for that, and Democrats couldn't pass those even with complete control.

In reality, they're stalling until they can draw themselves a decade of dominance. It's wrong, and many other principled Democrats have held true and continue to support the amendment, including every member of the State Senate's Legislative Black Caucus.

Americans of all sides want fair maps, even when partisan leaders try to hold control for themselves. Voters in Utah, Missouri, Colorado, Michigan and Ohio enacted redistricting reforms in 2018, often with 60 to 70 percent of the vote. Partisan gerrymandering is cheating. Voters know it. Now it is time for Virginians to remind their politicians that voters should choose their politicians, not the other way around.

There are national implications in this amendment vote: If Virginia Democrats kill Amendment One, they will have done serious and far-reaching damage to the voting rights struggle nationwide. They will have taken away one of the few examples in recent history where Democrats and Republicans actually worked together to "unrig" the political system. Citizens will have lost a seat at the table, and the unfair redistricting laws of Virginia's past will remain. The wrong signal will have been sent to politicians in other states. It is time for Virginia to be on the right side of history.

Katie Fahey, executive director of The People, founded and led Voters Not Politicians, the grassroots effort that amended Michigan’s constitution in 2018 to end partisan gerrymandering.