Even if Donald Trump loses, we must face that journalism has failed once again. What has happened to America? 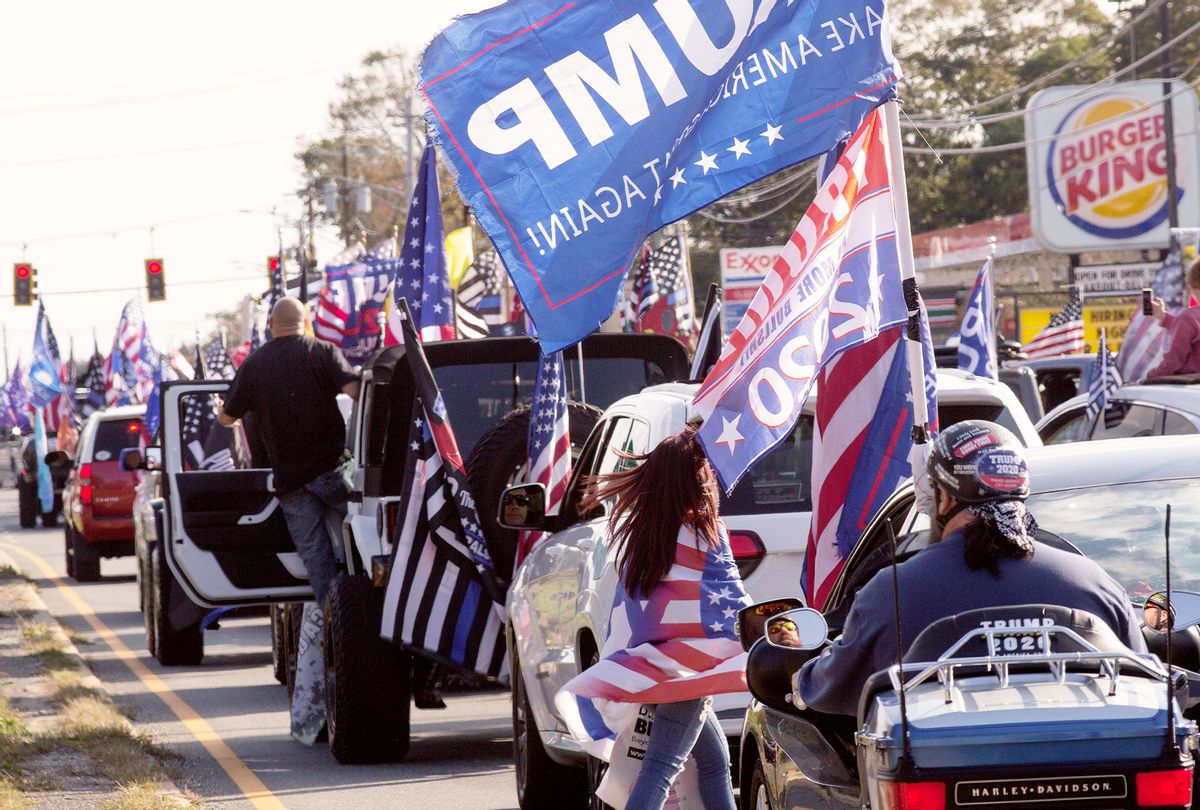 Trump supporters gather in a Long Island Rail Road parking lot before driving in cars as part of a caravan on October 18, 2020 in Seaford, New York. The group Long Island Loud Majority organized a car caravan ride from Seaford to Montauk to show their support for President Trump and his reelection in November. (Andrew Lichtenstein/Corbis via Getty Images)
--

I was so wrong. I was so naïve.

I thought that if mainstream journalists were simply more courageous about calling out Donald Trump for who he really is — and more assertive about confronting disinformation — then the American public would overwhelmingly reject him.

The journalism was disappointing. Reporters too often chose to normalize Trump's conduct and covered the campaign more or less like any other, rather than one in which the choice was between a return to some version of democratic norms and a failed state. Their passive truth-telling was no match for the aggressive lies of Fox News and the right-wing media ecosystem.

But that doesn't explain the fact that nearly half of the American public affirmatively voted for Donald Trump – way more voters, in fact, than in 2016 — and did it during the middle of a pandemic that he is disastrously mismanaging, for good measure.

Whether Joe Biden can eke out a win — as appears likely on Thursday morning — doesn't change the fact that a large subset of the American electorate is that deluded, that racist and that eager to submit to a strongman.

So it's no longer enough for journalists to simply do a better job.

We've got to take on some new jobs.

It's no longer enough to passively and politely chronicle what's happening.

We need to delve deeply into the pathology of this huge chunk of American voters.

Pluralism is a legitimate journalistic value, and it is under attack.

So we need to actively fight racism — starting by reporting much more vigorously about systemic oppression and white nationalism.

The role of the free press in the world's leading democracy is not to sit by and watch as authoritarianism takes root.

We need to actively promote democratic values, remind people of the importance of constitutional checks and balances, support human rights, and advocate for a government that is responsive to the people's needs.

The appropriate role of a journalist is not to sit by as the very notion of truth is undermined.

We need to crusade for reality. While Washington Post editor Marty Baron famously said, "We're not at war, we're at work," we need to go to war — against disinformation.

We need to go to war against Fox News and a right-wing media ecosystem that traffics in partisan lies.

As Janine Zacharia, who teaches journalism at Stanford, tweeted on Wednesday: "We're never ending polarization in this country or support for Trumpism unless we restore respect for credible, fact-based news and ensure every American gets quality information."

The most important and urgent journalistic task — one that no one else can accomplish — is for us to properly diagnose the problem.

What upsets me most as a journalist is that even after a seemingly endless, four-year parade of articles about how Trump supporters still support Trump, we continue to lack anything like an accurate, widely agreed-upon consensus about what motivates them.

Those articles almost exclusively entail credulous stenography, passing along quotes from Trump supporters that, when you stop to think about them, do hardly anything to explain their support.

Much of the time, these supporters say things that simply aren't true — like Kathleen Skeins, the Michigan voter who told the New York Times that over the past four years, Trump had been "straightening out" government corruption. Or like the Ohio construction worker who told the Economist that Trump "got health care done, which the Democrats could never do. He built the wall." (More examples here.)

Profiling Trump supporters like this Nebraska farmer, reporters at the Times engage in euphemisms: writing about a "sense of Trumpian kinship," for instance, rather than openly addressing white nationalist feelings of victimization.

Journalists need to stop buying transparently bogus explanations for why people support Trump and figure out what's really going on.

As I've written before, this requires a different interviewing style, actually one that is more empathetic and certainly more time-consuming. It means taking a more sociological approach, asking about formative moments, about cultural background and value systems, about education and, perhaps most importantly, about media diets. It means diving deep into the "comforting simplicity of tribe," as the Washington Post's Margaret Sullivan put it.

And in addition to exploring and countering disinformation at the macro level, we need reporters to examine how disinformation infects individuals and groups, leading to what I call fact rejection. How does that manifest within our communities? How widespread is it, and how is it transmitted? Who is most susceptible, and why? How persistent is it? What effect does it have? And, perhaps most importantly: Is there any way for people to recover from it? We need to frame these questions, and answer them, in order to fix this problem.

I believe these are essential tasks for journalists in the coming years. I call on existing newsrooms and philanthropically-supported initiatives to field an army of reporters — God knows, enough of them are unemployed right now — and send them out to communities all over the country, to help us figure out what is happening to America.