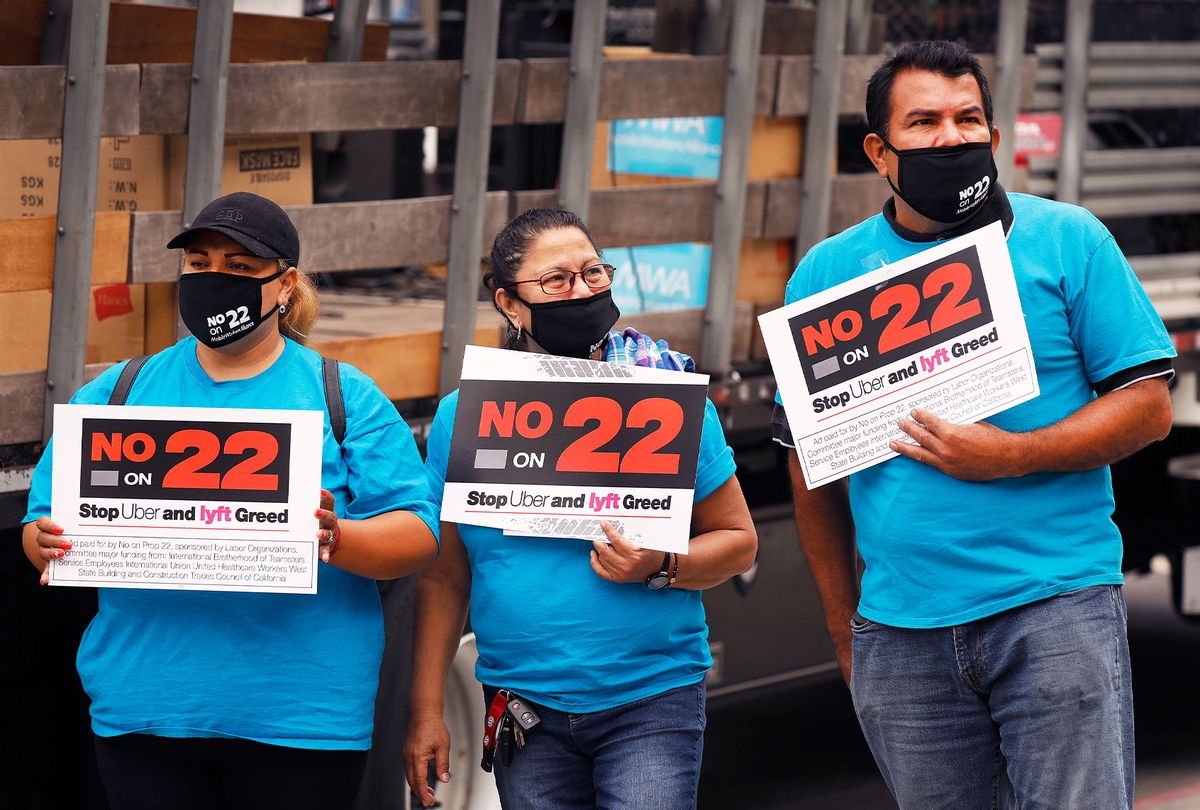 Luz Laguna, Isabelle Ramos and Leonardo Diaz, left to right, with Mobile Workers Alliance hold signs in support as app based gig workers held a driving demonstration with 60-70 vehicles blocking Spring Street in front of Los Angeles City Hall urging voters to vote no on Proposition 22, a November ballot measure that would classify app-based drivers as independent contractors and not employees or agents, providing them with an exemption from Californias AB 5. (Al Seib / Los Angeles Times)
--

When Uber first launched, it seemed like a convenient, money-saving novelty for customers and a lucrative side hustle for drivers — in other words, a win-win. Drivers, initially, were well-remunerated: in 2014, a study by a Princeton economist found Chicago Uber drivers made $4 more than the average taxi driver in the city.

However, like most cheap commodities, the cost for consumers didn't reflect that actual cost it took to get a ride. Instead, heavy subsidies from both investors and drivers (in the form of them owning their own cars and phones) made Uber and Lyft rides seemingly less expensive. In other words, the ride cost didn't reflect the hidden costs.

At its dawn, the fact that Uber drivers didn't receive benefits seemed like a trade-off for the flexibility and good wage. That changed when Uber became popular: a glut of drivers meant that supply was high, and thus work — and driver wages — would dip.

A 2018 Economic Policy Institute study, which used Uber administrative data, showed that after calculating Uber's commissions, fees, a driver's vehicle expenses, and the cost of a modest health insurance package, Uber drivers earn on average $9.21 or less. That's slightly above the national minimum wage of $7.25 an hour, which has not changed in a decade.

For other gig worker–reliant delivery and driver companies, the stats were even more dismal. A study from earlier this year published by Working Washington found that contract delivery workers for food delivery company DoorDash earned $1.45 per hour on average, after other expenses are accounted for.

The seeming success of Uber spread the concept of an on-demand, at-will contract labor force, hired at the command of an algorithm. Similar models emerged in Instacart, Doordash, Wag, Caviar, Postmates and Rover. In each case, the business model was nearly identical: exploit workers' non-status as employees to avoid having to pay them benefits or pay into other payroll taxes; make them expendable, and without guaranteed work at any given moment, to save money; have the employee own their own mode of transit and phone, thus saving on equipment costs, and obscuring the true wage. Indeed, pushing costs onto employees were built into the gig economy business model; once the dust settled, many gig workers realized it would be difficult to make a decent living.

"I quickly discovered that it's impossible — that when you need to actually exist on this income and pay things like health insurance for myself and my teenage son, and just put food on the table, and pay rent and all the other costs in the Bay Area, it's impossible to exist on a Lyft income," Edan Alva, who started driving for Lyft in 2014, told me.

Salaried tech workers and contractual gig workers had a joint awakening around the same time in 2016, as a nascent labor movement began rising in Silicon Valley. By 2019, white collar tech workers were organizing against tech CEOs, and gig workers were, too. Grassroots labor groups like Gig Workers Rising and Rideshare Drivers United bubbled up, organizing protests when Uber and Lyft slashed their wages as those companies readied to IPO.

Their organizing helped pave the way for Assembly Bill 5 (AB5) to be passed in California's Congress, which codified a 2018 California Supreme Court decision known as Dynamex and applied a "test" to independent contractors that would determine if they were misclassified, which would change many of them to full-time, benefitted and salaried workers.

No one knew then how that well-meaning state assembly bill would eventually lead us to where we are today, with California voters approving Proposition 22, Uber and Lyft's astroturf campaign to exempt their workers from AB5, which passed only after an alliance of gig worker–reliant corporations spent $200 million on campaign advertising — making the ballot fight the most expensive in the history of the United States.

Californians' approval of this ballot measure cements gig workers as permanent independent contractors, keeping them from qualifying to be full-time employees and receive basic benefits. Labor experts at University of California – Berkeley did an analysis which found that Proposition 22's passage means that Uber and Lyft drivers will only make $5.64 an hour on average. It's a major setback for labor rights in a state that has set historic precedents for labor, including raising the minimum wage to $15 an hour by 2023.

As the most populous state in the union, the passage of Proposition 22 could be a harbinger — and a political model that Uber, Lyft and their peers may export to other states. As Ken Jacobs, the chair UC Berkeley Center for Labor Research and Education Institute for Research on Labor and Employment, told me in 2019, "what happens in California will be closely watched around the country."

"As we have seen with paid sick leave, $15 minimum wages, and fair scheduling, policies that start in one state or locality often spread elsewhere," Jacobs added then.

More recently, Jacobs told me that he feared the approval of Proposition 22 would send "signals to other states" from these tech companies to forget about enforcing their laws because of their political power.

Labor expert Rey Fuentes, Skadden Fellow at the Partnership for Working Families, previously told Salon that Proposition 22's passage would "lock in" a "permanent underclass of workers." Fuentes warned that, because of the way the measure is written, workers would no longer be able to unionize. More shockingly, it is written such that it would require a 7/8ths majority of state legislators to undo — a bar that is so high as to be effectively impossible to undo.

"From an abstract perspective, the idea that some of the richest companies in the world are passing a ballot initiative that would exempt their workers from basic labor protections is just, I think beyond the pale," Fuentes added.

Proposition 22 was the most expensive ballot measure contest in California — and the United States — in history. The tech companies who funded it collectively spent over $29 per "yes" vote; together, nearly $204 million was spent on the astroturf campaign. The astonishing sum of money reveals the lengths tech companies are willing to go to keep drivers in a precarious labor situation with low pay and substandard benefits.

Organizers in California were deeply upset by the setback, while admitting that they could not compete with tech companies' deep pockets.

"We went up against Goliath and Goliath had $204 million, but I don't think it's wavered us as a collective," Mekela Edwards, who has driven for both Uber and Lyft, told Salon. "Our next step is to continue to fight for what we believe is right."

Curiously, the ballot measure faced its strongest opposition in San Francisco, where both Uber and Lyft are headquartered — suggesting that the locals distrust them most.

This story was updated November 18 to clarify which apps that follow a similar gig economy, middleman model as Lyft and Uber.