DoorDash drivers make an average of $1.45 an hour, analysis finds

Worse, about a third of DoorDash jobs paid less than $0 after accounting for basic expenses 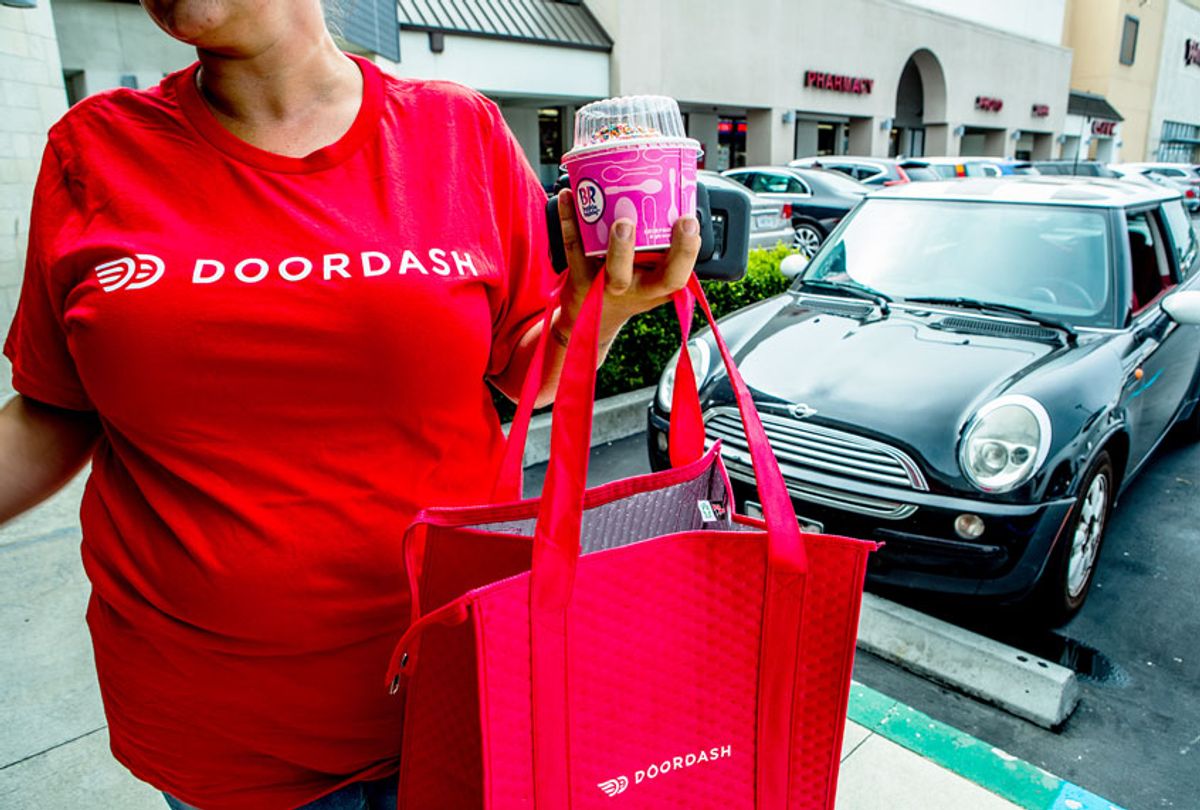 The Door Dash driver leaves Baskin Robbins, over in hand and heads to their delivery. (Getty Images/The Washington Post)
--

The national minimum wage of $7.25 an hour has not changed in a decade, and there is widespread agreement that it is far below what constitutes a living wage anyway. As if the statistics on the federal minimum wage weren't dismal enough, leave it to Silicon Valley to figure out "innovative" ways to pay workers even less. A new, in-depth quantitative study released this week, as part of a worker campaign in collaboration with the worker rights non-profit Working Washington, found that contract delivery workers for food delivery company DoorDash earn $1.45 per hour on average, after other expenses are accounted for.

DoorDash is an on-demand prepared food delivery service. The basic premise is that the compay's contract delivery drivers, or "Dashers," deliver food to customers who order on the mobile app. Similar to Uber drivers or TaskRabbit workers, the company advertises that, by becoming a Dasher, you can "be your own boss" and "enjoy the flexibility of choosing when, where, and how much you earn."

Working Washington crunched pay data from 229 delivery jobs from Dashers around the United States, and found that the workers were making an average of $1.45 an hour, after taking into account the costs of mileage, additional payroll taxes that add up for independent contractors, and the lost work time as workers wait for the next job. All of the data was from November and December 2019, after the company implemented a new pay model. The estimates made in the study don't take into account the cost of paying for public insurance benefits. They only factor in work expenses beyond mileage and payroll taxes — which means the real wages may be even more depressing.

Nearly a third of [DoorDash] jobs actually pay less than $0 after accounting for these basic expenses. Just 11% of jobs pay more than the federal minimum wage of $7.25/hour, after expenses, and only 2% meet the standard of $15 + expenses. Further, jobs with higher tips still tend to include lower pay: the set of jobs with tips of less than $1 pay 1.8 times as much as those jobs with tips of more than $8, on a gross hourly pay basis.

In November 2019, DoorDash claimed its new pay model would result in gross hourly earnings of more than $18.

But as the report explains, it's unclear what qualifies as "gross" earnings:

The company has declined to disclose how much of that gross amount is tips, how much is pay from the company, how many miles workers drive (and thus much much mileage expense they incur), what periods of time they consider to be part of an 'active hour,' or other details and costs involved in achieving that reported level of gross earnings.

What it boils down to is that DoorDash has created a pay model in which workers appear to be making a decent wage on paper, but which, after expenses, is barely more than $0. Worse, only 11 percent of DoorDash jobs paid above the U.S.'s laughable federal minimum wage.

Yet DoorDash's manipulative exploitation of its workers is evidently great for its business model and its investors. According to CNBC, Doordash seized one-third of the digital food delivery sales in the U.S. market in 2019.

California's recently-passed Assembly Bill 5 is meant to protect gig workers such as these by defining the scope of when and where a contractor can be used and incentivizing companies to transition to salaried workers. Yet rather than accede, companies like DoorDash and Uber are ruthless fighting against the bill, taking measures to make clear that their gig workers are independent contractors.

Uber recently announced it would give drivers more control over their rides — a change that sounds freeing on paper, but which is designed to let drivers skirt the law so they can be more clearly defined as contractors.

In October 2019, the CEO of DoorDash slammed the California law.

"It would have disastrous results if it's implemented because it's trying to impose an imperfect solution into a very big problem," Tony Xu said. "The net impact of AB5 would be a lot of lost economic opportunity and income for the state of California."