Hey, Fox News: Go home, you're drunk — it's time to admit that the Trump party's over 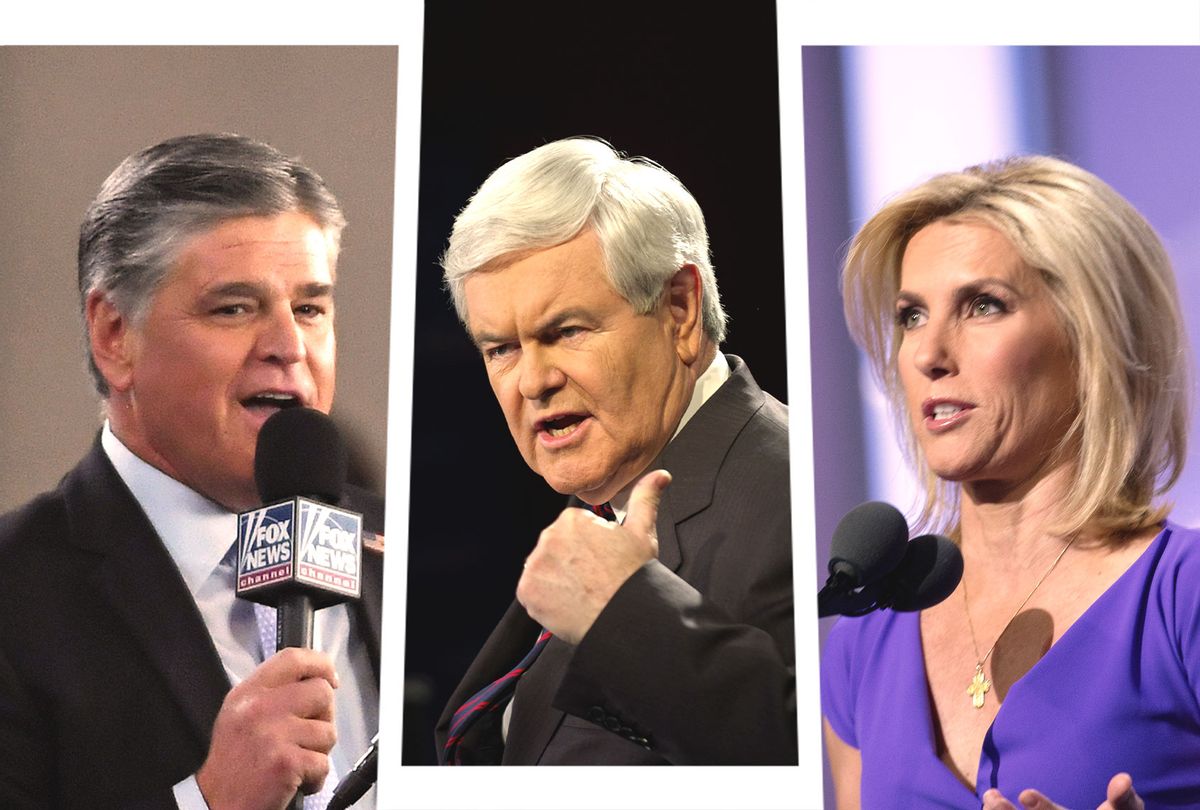 Most still-rational Americans, watching Donald Trump's atrocity of a press conference on Thursday night, had two simultaneous reactions: Wow, that man really is the worst living American, and also, yeah, this is all over except for the paperwork.

It was an odd mix of emotions. There was the disgust of watching the actual president of the actual United States demand that legal votes be thrown out insinuating that millions of American voters were somehow fakes. But there was also the relief of seeing Trump's facade of bravado collapsing, exposing the loser that was always hiding behind that wall of bluster. Even many Trump voters knew, at that moment, that it was over. Trump's attempted coup is collapsing under the weight of his own incompetence and laziness.

We are now at the portion of the right-wing cycle of failure where the supporters of the corrupt and failed Republican president slink away and pretend that they were never that into him in the first place. (See: Nixon, Richard M., and Bush, George W.) But for whatever reason, a decent number of rats are clinging fiercely to the side of the sinking ship, insisting, as the water starts lapping against their skinny tails, that Captain Bleach-Injector can still somehow save himself.

Thursday night, a frantic Sean Hannity was on Fox News, baselessly claiming that Philadelphia election officials counting Pennsylvania ballots are "violating the law" and suggesting, apparently not as a joke, "a do-over in that state." On his radio show, Hannity begged for state-appointed electors who'll vote for Trump, defying the actual voters of Pennsylvania. (State GOP leaders have declined.)

House Minority Leader Kevin McCarthy appeared on Laura Ingraham's Fox News show and falsely claimed that "Trump won this election," demanding, "Everyone who's listening, do not be quiet." He then tweeted out the video clip, in case there was any doubt he was trying to rile up Republican voters with these lies. Twitter put a content warning on the video.

Ingraham went along with McCarthy's antics, demanding that other Republican politicians "better stand and fight" for Trump and claiming that "we have huge amounts of money from Mark Zuckerberg and George Soros and others flooding" into "canvassing, you know, states like Pennsylvania." This claim is not only untrue but also nonsensical: The apparent implication is that, while Republicans are allowed to canvass and organize, Democrats have no such right.

Tucker Carlson was relatively limp, trying to boost Trump's conspiracy theories and complaining about "the media" calling the election. The latter is a particularly shameless play, as Trump's entire coup plot — which he has laid out in great detail over the past couple of months — was to seize on the appearance that he was ahead in early media reports on Tuesday night as evidence he had "won," even though all votes hadn't counted.

On Hannity's show, South Carolina's Republican Sen. Lindsey Graham let loose with baseless accusations, which carried a strong whiff of racism, that Philadelphia's elections are "crooked as a snake" while Arizona's are to be trusted. (News flash: Trump will probably lose that state too.)

Even former football coach Tommy Tuberville, having defeated Democratic Sen. Doug Jones in Alabama, decided that one of his first acts as a senator-elect was to declare that "the game is over" but "the referees are suddenly adding touchdowns to the other team's side of the scoreboard." It's a false analogy that elides the fact that votes are always counted after the polls close.

Salon's Sophia Tesfaye has an astounding list of other examples from GOP politicians, so readers can get the full scale of how bad this is.

Right-wing media whining has already drifted toward violent fantasies. Newt Gingrich, after letting loose with a racist rant about the "Philadelphia machine," the "Atlanta machine" and the "machine in Detroit," demanded on Fox News that Attorney General Bill Barr arrest election workers and menacingly declared that "federal agents can carry guns in the pursuit of people who are breaking the law."

While interviewing Rudy Giuliani on his radio show, Trumpian pseudo-fascist crackpot Sebastian Gorka declared that "we should just force our way in" to voting centers to keep votes from being counted. This was a bridge too far even for Giuliani, who suggested "that would require a fistfight, which I guess our people don't want to get involved in."

After falsely announcing that "Trump won an overwhelming victory" and was already "in his second term" in a Fox Business interview, disgraced former Trump adviser Steve Bannon went on his own radio show and fantasized about killing Dr. Anthony Fauci and FBI Director Christopher Wray.

"I'd put the heads on pikes," Bannon said, "as a warning to federal bureaucrats."

All of this, it should go without saying, is deeply evil. These people aren't just undermining democracy and telling outragous lies, they're often trying to incite violence against their fellow Americans. But evil is, sadly, to be expected. That's what has become of the Republican Party after decades of dehumanizing propaganda and five years of Trumpism.

But what's more puzzling is how irrational this behavior is. All these pundits and politicians are out there, flailing around and lying for Trump, and for what? He's a dead man walking, and they know it. The lawsuits Trump's team are filing are unbelievably feeble, so much so that it's clear they're less meant as a serious effort to rescue Trump from electoral defeat than to bolster his delusions that he's being unfairly victimized.

There's no point in defending Trump now, especially not in the stick-your-neck-out way we're seeing from Fox News hosts and politicians like Graham or McCarthy. It's certainly not going to make it more likely there's some miracle where Trump pulls himself out of a nosedive.

The only purpose of all this nonsense is to soothe Trump's injured ego with pretty lies about how he should have won and it's all rigged and he's the real winner here and not the massive loser he looks like to the whole world right now.

And I have to ask: To what end? It's one thing to flatter Trump when he's the president — it's gross and cynical, but entirely rational, to want the power of having a president on your side. It's another thing entirely to keep at it when he's on his way out. It's especially weird to demonstrate loyalty to Trump, a man who will never return it and would sell out all his bootlickers to black-market organ salesmen if he thought that might save his sorry ass.

I'm forced to conclude that these people merely stunned and falling back on bad habits. After four years of relentless lying and toadying to this reality-TV villain who sleazed his way into the Oval Office, the Trump apologists don't know how to quit him. Even as the building collapses around them, they're carrying on as if Trump will somehow find a way to survive this, because that's what they've been conditioned to believe.

The saddest part? Their audiences and supporters will forget all this when Trump finally leaves office. That's when the right will move seamlessly into Phase II: Forget This Ever Happened.