Even with Biden on the edge of victory, Republicans are backing Trump's spurious and dangerous claims all the way 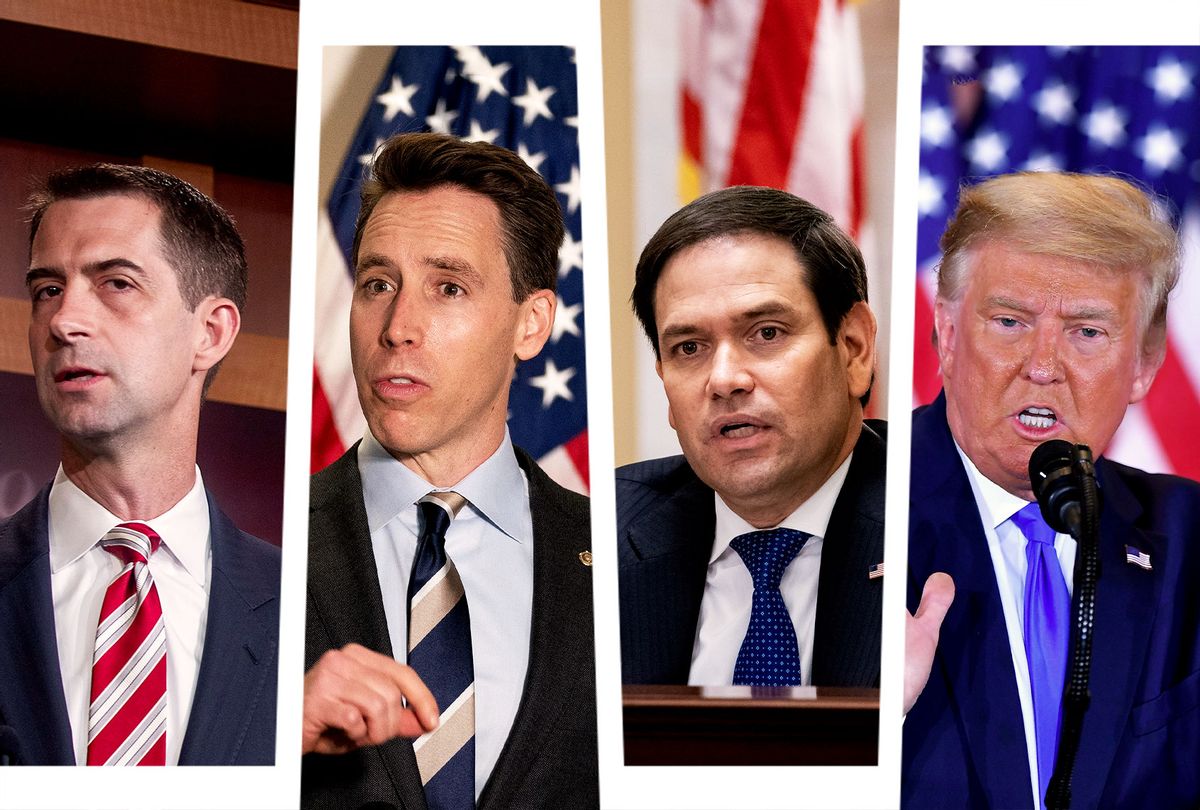 Is it too soon to let out a sigh of relief? At the end of a long week, it looks as if America has avoided the worst-case scenario. With Joe Biden likely to be declared president-elect on Friday, we've officially reached the point where the biggest attempt to discredit the U.S. election is coming from President Trump, even as judges across the country are laughing his lawsuits out of court and the media is largely portraying him as a whiny baby throwing a tantrum.

But it is entirely too early to rest easy.

After Trump took to a podium at the White House late Thursday to deliver another baseless rant about a stolen election, in what felt like an effort to explain away his impending and inevitable defeat, CNN contributor Rick Santorum, a former Republican senator and presidential candidate, claimed that no GOP official would stand behind Trump's efforts to delegitimize our electoral process. Republicans like Santorum have long waved away concerns about this very scenario and many in the media have insisted that the "institutions will hold. Many people remain confident that Trump appears flailing and impotent in defeat and that the so-called adults in the room will swiftly reject him — but nothing about the last four years should offer us much confidence about that.

Remember the "Access Hollywood" tape? With days to go before the 2016 election, several Republicans in Congress rushed to rebuke Trump as a sexist boor who in no way represented their values — only to turn around after his shock victory and become his most fervent boosters. We are already seeing much the same turnaround from the usual GOP suspects today.

Chris Christie garnered plaudits when he immediately called Trump's decision to petition the Supreme Court "a bad strategic decision" and "a bad political decision" in the early morning hours after Election Day. The admonishment of James Baker, the former secretary of state who led George W. Bush's Florida recount battle in 2000, was shared widely on Thursday. Baker told the New York Times, "I think it's pretty hard to be against counting the votes."

"We never said don't count the votes," Baker explained. "That's a very hard decision to defend in a democracy."

After Trump's Thursday remarks, Gingrich returned to Fox News, and literally suggested that federal agents arrest election workers and law enforcement officers in Pennsylvania. Those shocking and dangerous comments came after the Department of Justice informed federal prosecutors that they were permitted to send "armed federal officers to ballot-counting locations around the country to investigate potential voter fraud." DOJ lawyers are reportedly looking into Republican claims of fraud in Nevada while Trump reportedly contemplates firing a handful of top officials, including Secretary of Defense Mark Esper and FBI Director Chris Wray, in an attempt to look as presidential as possible.

Infamous GOP operative Karl Rove, now a frequent Fox News contributor, has managed to release a few words downplaying Trump's plans — but only on his personal blog. Utah Sen. Mitt Romney's statement on the matter was so useless it completely failed to mention the main perpetrator of these spurious allegations: Trump. The Republican governor of Maryland, Larry Hogan, was a bit more forceful in his pushback — but Hogan has long been a Trump critic, and has said he cast a write-in vote for Ronald Reagan in this election. (Reagan is not technically eligible on at least two constitutional counts.) Just as they failed to push back on Trump when he falsely claimed voter fraud after actually winning the 2016 election, the "reasonable" Republicans will not save us now.

The president's campaign has called for the counting of citizens' votes to halt, has encouraged his supporters to interfere with the counting of ballots — in the apparent hope that disturbances will help with his lawsuits — has solicited examples of supposed voter fraud from disreputable sources, like bottom-feeding lawyers looking for clients, and is openly pleading for the intervention of Justice Amy Coney Barrett, Trump's newly-installed Supreme Court nominee. on Fox News. Within just a few days, Team Trump has done everything short of unleashing right-wing con artists Jacob Wohl and Jack Burkman from their jail cells. Yet most Republicans in Congress are rushing to Trump's side.

The trifecta of Republican senators most likely to run in 2024 — Tom Cotton, Ted Cruz, and Josh Hawley — have amplified Trump's baseless claims loudest, even encouraging their supporters to donate to the president's legal defense fund. South Carolina Sen. Lindsey Graham, who easily fended off a Democratic challenger this week to win a new term, said he would personally donate $500,000 to Trump's effort. Telling Fox News' Sean Hannity that while he does "trust Arizona," where Trump is gaining in the vote count, Philadelphia elections are "crooked as a snake." Asked whether the Republican-dominated Pennsylvania legislature should appoint its own slate of Trump electors, Graham said, "I think everything should be on the table."

Republican members of the House have joined protests at vote-counting sites in Arizona, complained about "shady ballot counting" in key states, and falsely suggested that votes are being counted in secret. The Republican majority leader of Pennsylvania's House is now blaming Democrats for the commonwealth's failure to have a final count of mail-in ballots on Election Day — but it was his legislative body that blocked Democratic efforts to allow counting to begin early.

This election was supposed to be a drag on down-ballot Republicans. Not so much. Just as in 2016, Trump turned out to be a boon, not a burden, to the GOP. It was only in 2018, when Trump wasn't on the ballot, that the party faced a modicum of accountability. Republicans have apparently learned their lesson. As they've also demonstrated with the COVID pandemic, Republicans are more than willing to sacrifice truth, democracy and their own long-term political viability to make their political opponents suffer in the near term.