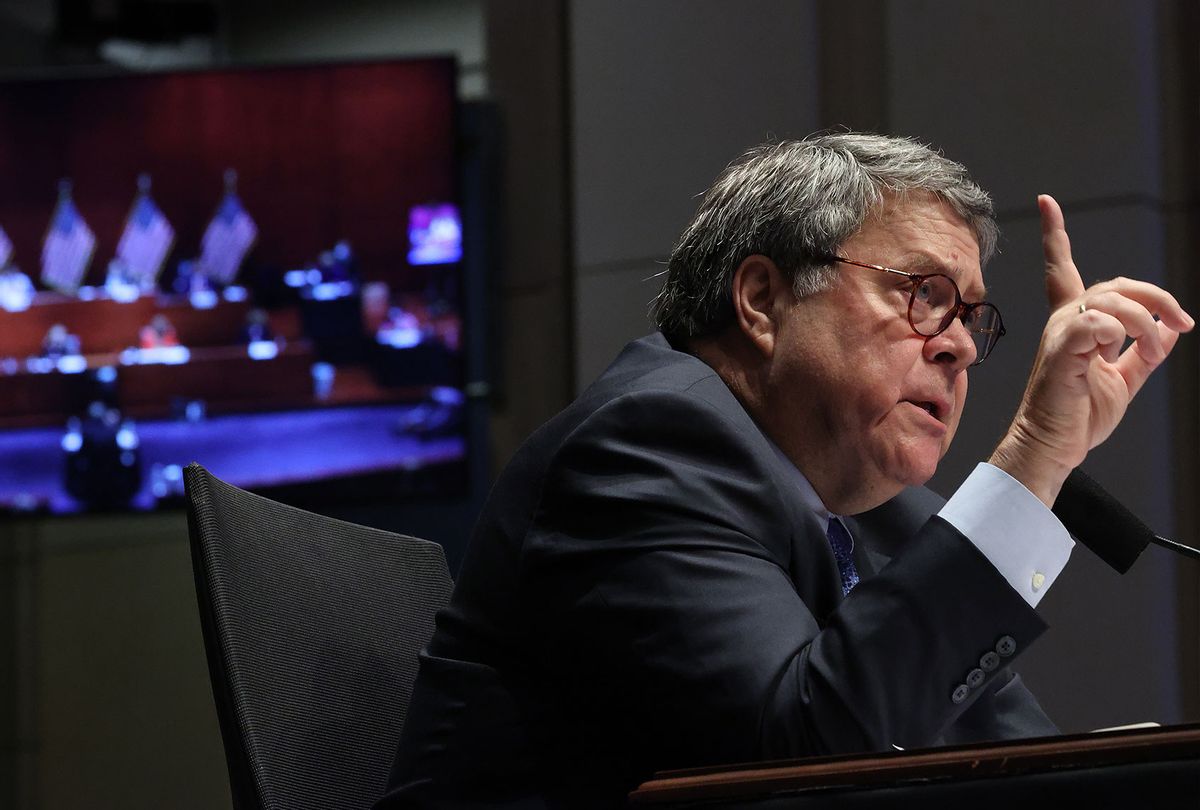 The Department of Justice claimed that it can deploy armed officers to police potential "voter fraud" at ballot-counting centers by reinterpreting a law barring armed federal officers at polling places on Election Day, according to The New York Times.

Federal law prohibits the use of armed federal officers "at any place where a general or special election is held." But a top official at the department told federal prosecutors in a Wednesday email that the law allows them to send "armed federal officers to ballot-counting locations around the country to investigate potential voter fraud," the Times reported, raising the "specter of the federal government intimidating local election officials or otherwise intervening in vote tallying" after President Donald Trump demanded to "stop the count."

Richard Donoghue, the No. 2 official at the office of Deputy Attorney General Jeffrey Rosen, who was appointed by Attorney General William Barr in July, said the law "does not prevent armed federal law enforcement persons from responding to, investigate, or prevent federal crimes at closed polling places or at other locations where votes are being counted" in an email sent around 1:30 a.m., according to the report.

The Wednesday email came shortly before Trump falsely declared himself the winner of the election and demanded that "we want all voting to stop."

Some election officials are already vowing to resist any "interference or intimidation efforts" by the Justice Department, according to The Times.

"Elections are a state matter, and we have authority as state officials over anyone trying to enter locations where ballots are being counted," Massachusetts Attorney General Maura Healey told the outlet. "Anything else is a radical reinterpretation of the law. States can handle elections, and we will ensure the people decide the outcome."

The move comes after Trump spent months laying the groundwork to dispute the results of the election by pushing baseless allegations of "fraud." That effort was bolstered by Attorney General Bill Barr, who stoked unfounded fears of mail vote fraud despite admitting that he had no evidence to support his claims.

Vanita Gupta, who served as the acting head of the Justice Department's Civil Rights Division under former President Barack Obama, told The Times that the latest directive appeared to be a "messaging tactic for the attorney general."

"Lawfully, the Justice Department can't interfere in the vote count, enter polling places or take ballots, even in the course of an investigation," she said.

Some Trump supporters, clinging to the president's statements, descended on a vote-counting center in Detroit to demand that officials "stop the count," even though Biden currently leads in the state. Other Trump supporters in Phoenix forced police to escort county workers to safety on Wednesday amid demands that officials "count the votes" as Trump narrowly trailed in the count.

The Trump campaign is also demanding a recount in Wisconsin, though it is not expected to help it overcome a 20,000-plus-vote lead. Team Trump has filed multiple lawsuits challenging the vote counts in Pennsylvania, Michigan and Georgia.

Wendy Weiser, an elections specialist at the Brennan Center for Justice at New York University School of Law, said the Justice Department's guidance raised concerns that "someone may be contemplating inappropriate actions that violate the statute" amid Trump's legal push.

"This is wholly unseemly and wholly inappropriate," she told Time magazine.

Rick Hasen, an election law expert at the University of California Irvine School of Law, agreed that "the timing is quite curious, especially given earlier concerns about the politicization of the Justice Department to aid in any effort by the Trump campaign to try to contest the vote."

Legal experts largely concurred that any attempt by the Justice Department to circumvent the law would be met with legal challenges.

"It would require a lot of people to be willing to ignore the rule of law in order for a plot like that to succeed," Weiser told Time. "Even if God forbid the FBI did it, then I think a court would step in to stop that."