The attorney general voted by mail in an election last year 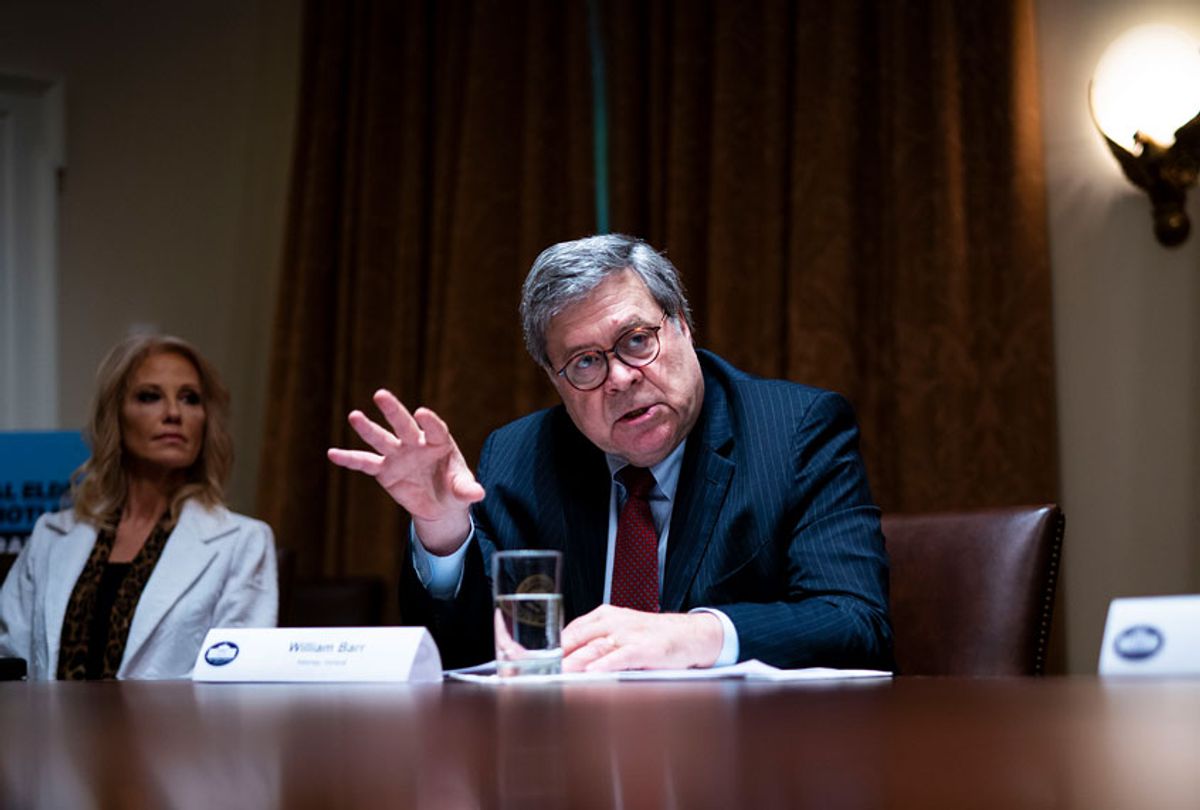 Attorney General William Barr admitted twice in one interview that he has no evidence whatsoever to support his claim that foreign actors could flood elections with "millions" of counterfeit ballots if the U.S. implements a national vote-by-mail program. The conspiracy theory has already been debunked by election experts.

"I think there's a range of concerns about mail-in ballots," the country's top prosecutor told NPR's Steve Inskeep in an interview which aired Friday.

"And let me just clarify here: I'm not talking about a mail-in ballot for a limited number of cases where somebody, you know, is going to be traveling around the world," he said. "And the way that the state has provided for that is you mail in your ballot."

Barr was alluding to mail-in absentee ballots, a voting option which he and a number of other senior administration officials have exercised. He voted by mail in Virginia in 2012 and 2019, according to The Washington Post.

"I'm talking about a comprehensive rule where all the ballots are essentially mail-in, and there's so many occasions for fraud there that cannot be policed," Barr continued. "I think it would be very bad, but one of the things I mentioned was the possibility of counterfeiting."

"Did you have evidence to raise that specific concern?" Inskeep asked.

"No, it's obvious," Barr responded.

"You don't have to be a rocket scientist to figure that one out," he added.

If Russia were to try such a scheme, it "would have to reproduce the entire election administration apparatus somewhere in the middle of Siberia," Charles Stewart, the founding director of the Election Lab at Massachusetts Institute of Technology, told CBS News.

Barr, however, claimed that ballots are susceptible to fraud, because security features are "pretty primitive." Once again, the country's top prosecutor failed to offer evidence or explanation.

Inskeep wondered whether Barr would be willing to take up an offer from Kim Wyman, the Republican attorney general of Washington state, who invited him to inspect her state's security measures.

"Well, I'm not sure I'm going to go out to Washington state right now," Barr said, adding that he would be "glad to call her up."

"I don't think Washington state has much experience dealing with our adversaries' intelligence services," the attorney, who once testified that candidates should alert the FBI if they received political dirt from a foreign intelligence service, continued. (Barr said he would not extend the same guidance if it came from "a foreign adversary" generally.)

Asked whether he believed an election conducted mainly by mail could be secure, Barr responded in the negative. He pointed to the fact that the government had misdirected "something like 20%" of coronavirus relief checks. (About $1.4 billion did go to dead people.)

Whereas the relief check destinations were drawn from a federal list based on old tax returns, voters provide their most up-to-date address for mail-in ballots.

Additionally, the decentralized nature of the country's state-run elections means there is a wide variation of ballots, including locally for different candidates and issues.

Colorado has conducted elections by mail since 2013, and Secretary of State Jenna Griswold says "there are literally thousands of ballot styles in every election."

In response to Barr's claim, NPR political analyst Mike Parks said: "I've talked to no voting expert who believes this could happen."

Though Americans favor vote by mail by a two-to-one margin, theories such as Barr's could prompt a significant portion of an already dubious electorate to question the integrity of the results.