Inside "Stop the Steal": How right-wingers are organizing to spread baseless claims of voter fraud 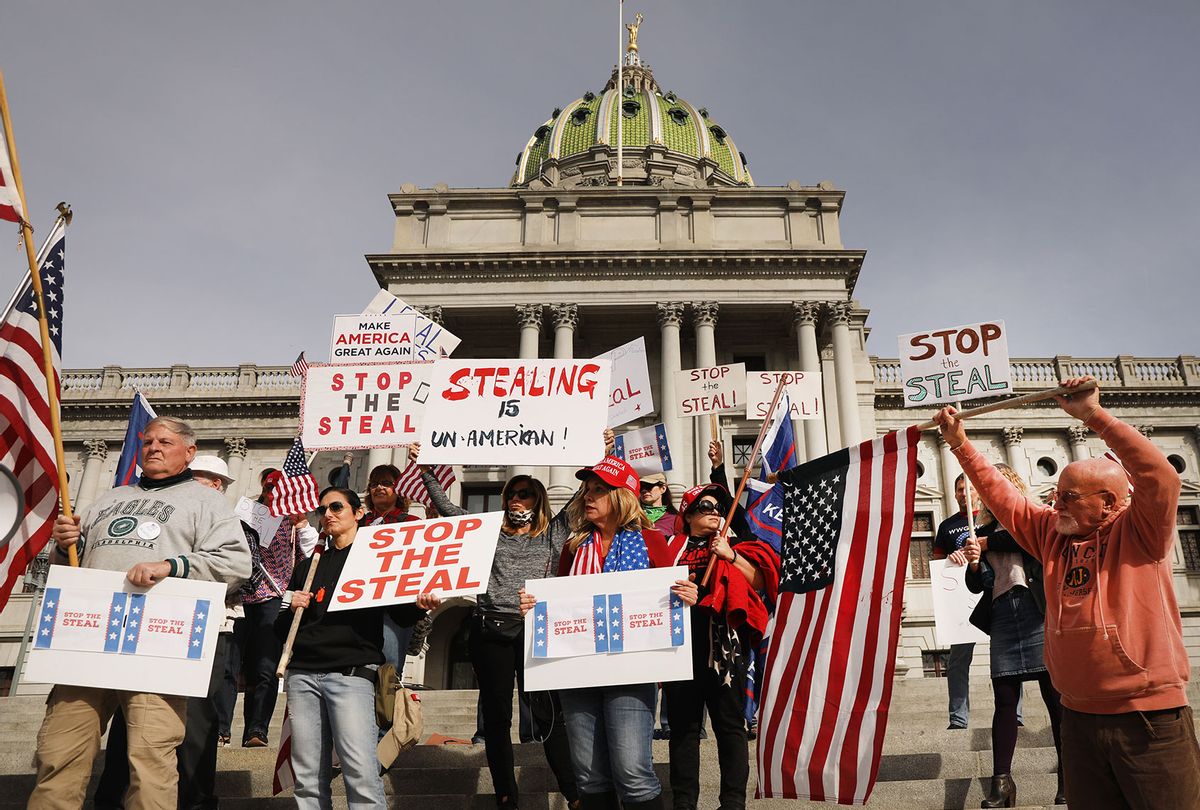 On Thursday, Facebook shut down a rapidly growing online group rallying around baseless claims that Democrats are trying to "steal" the election.

According to reporter Sheera Frenkel at the New York Times, the Facebook group titled "Stop the Steal" was one of the fastest growing Facebook groups in the social media company's history. It launched on Wednesday and grew to over 350,000 members on Thursday. Group members were organizing protests against the presidential election, and some members were calling for violence.

A Facebook spokesperson told The New York Times that the group was shut down as part of its crackdown on misinformation during the election.

"The group was organized around the delegitimization of the election process, and we saw worrying calls for violence from some members of the group," Tom Reynolds, a Facebook spokesperson, said.

Although Facebook has shut down the group, alternative groups have sprouted up, and many have organized under the same title. One group that was created in 2018 called "Hardcore Trump Nation" changed its name to "Stop the Steal" on November 5, and now has 5,000 group members as of Friday. Salon found other examples of pro-Trump groups created in the last couple years that have suddenly changed their names to "Stop the Steal" as well.

As Salon previously reported, the same "Stop the Steal" hashtag trended baselessly during the 2018 midterm elections. It now appears that the current iteration of the Stop the Steal movement is not only being promoted by die-hard Trump supporters, but also Tea Party activists or others who have organized Trump-adjacent campaigns in the past.

Mother Jones reported this week that the domain StolenElection.us is registered to the Liberty Lab, which is a digital marketing firm that offers digital services to conservative clients. Liberty Lab bills itself as a "boutique digital agency" that offers digital services like social media marketing. Its clients include a PAC behind an effort to recall California's Democratic governor; the right-wing think tank The Mackinac Center for Public Policy; Salem Media Group, which owns various conservative media properties; the 2012 Newt Gingrich presidential campaign; Women For Trump; and a couple more MAGA-Trump related campaigns, including Steve Bannon's "Build the Wall" campaign. Scott Graves lists himself as the firm's president on LinkedIn. According to the Mother Jones report, the Stop the Steal Facebook group was linked to the non-profit Women for America First, which is led by Amy Kremer, a former Tea Party activist.

In 2016, Cambridge Analytica played a big role in creating and executing a massive misinformation campaign on behalf of Trump, which was widely reported on after their efforts to suppress the Black vote came to light. It appears that Liberty Lab is doing similar work under the banner of "digital services" for Trump's attempt to undermine the vote-counting process.

Organizing around the Stop the Steal movement extends beyond Facebook and Twitter. Salon found a link to a Google drive folder posted on Twitter with examples of scripts for people to contact their state legislators to "encourage them to cast their electoral votes as republican" in Arizona, Georgia, Michigan, Pennsylvania and Wisconsin. In addition to the script, the organizers provide suggested answers to questions such as "Is this movement a result of a political bias?" To which constituents are advised to respond: "No, this is an American movement. I am doing this because I believe in fair elections."

As Twitter has been labeling tweets attempting to undermine the electoral process and Facebook has been banning similar groups, many associated with the baseless Stop the Steal movement have turned to the social media platform Parler, which is known to harbor Trump supporters, as a report in The Verge notes. On Parler, a user with the handle @StopTheSteal has been sharing rumors and conspiracy theories about voter fraud and is urging people to attend Stop the Steal rallies across the country.

The rhetoric and messaging being used in these groups is being amplified by Trump himself and his high-profile allies. Trump has repeatedly communicated baseless claims that the Democrats are "stealing" the election, alleging that there are "missing" military ballots, "illegal ballots," and decrying the ongoing counting of votes in many of these states.

Politifact, which is run by the Poynter Institute, has corroborated that these claims are false. For example, Wisconsin state election officials said it's completely untrue that "thousands" of pro-Trump military ballots were found in the trash. Yet, a story published by the conservative blog PJ Media, which is part of Salem Media Group who's been a client of Liberty Lab, appears to be one source of this conspiracy theory that's being spread on social media.

And then there's #SharpieGate, which has been publicly discussed at in-person rallies in addition to social media. This conspiracy falsely claims that Arizona polling places handed out Sharpie pens to Trump supporters to intentionally invalidate their ballots. According to Snopes, this isn't true, either. Arizona Secretary of State Katie Hobbs has stated that ballots marked with Sharpie pens would be counted.

There have also been claims that dead people voted, which multiple state departments have explained is false. For example, the Michigan Department of State explained on Twitter that ballots of deceased people are rejected in Michigan.

As baseless as these theories are, cyber experts think they might be around for a while.

"We expect now at this point that these narratives are going to survive the election and last for quite a long time, perhaps becoming either consolidated into existing conspiracy frameworks such as QAnon or becoming the basis of completely new conspiracy theories," Alex Stamos, director of the Stanford Internet Observatory, said in a press briefing.