In "The Empire of Depression," a medical historian digs into the ailment's peculiar history

From "melancholia" to "sinking heart" to "utsushō," depression in some form spans across cultures and time 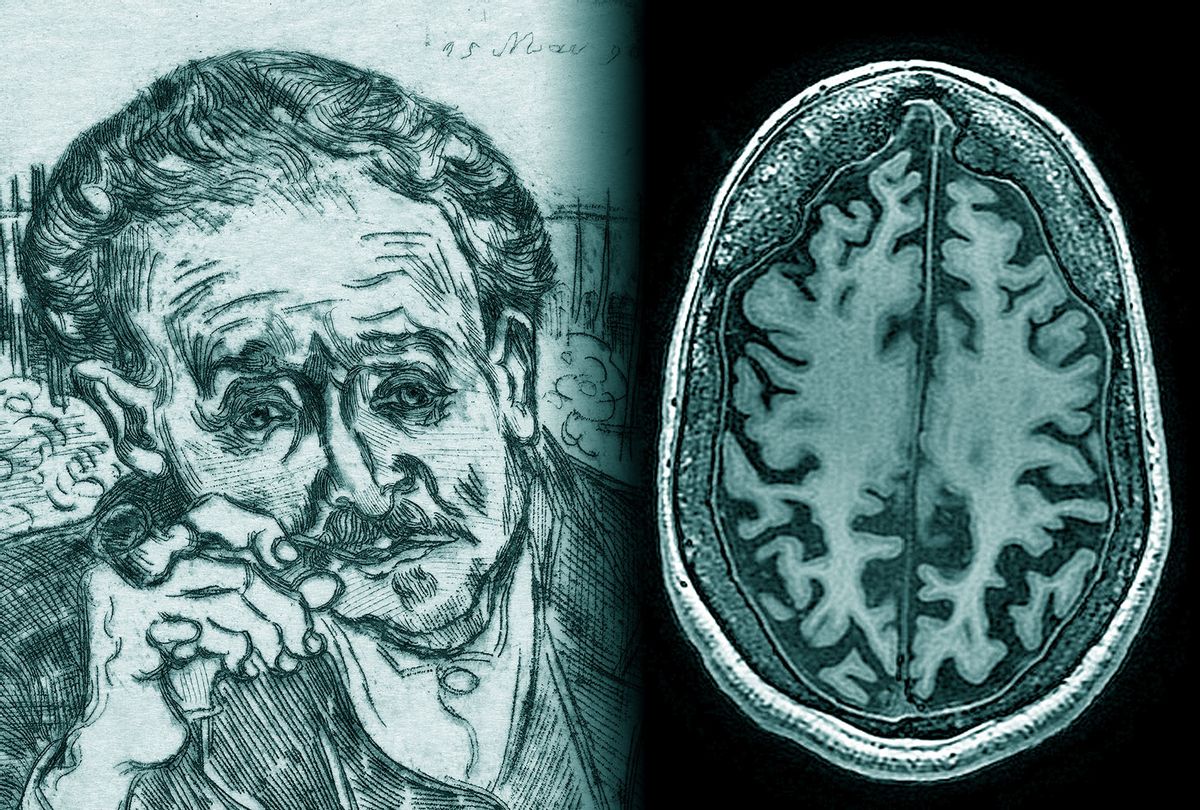 Before globalization, before the internet, before mass communications, depression existed among all humans around the world — we just called it different things. Melancholia in the West, "sinking heart" among the Punjabi, or utsushō in Japan were all variations on an idea, though the articulation varied.

Mental health terminology is an ever-shifting terrain — shaped by culture, science, and politics all at once. And nowadays, perhaps in part to the Western mental health system's obsession with categorization (vis-a-vis the Diagnostic and Statistical Manual of Mental Disorders, or DSM), the term "depression" is the normalized diagnosis and an everyday topic of discussion. Yet, if you were to say 150 years ago that you were "depressed," people would think that you were referring to a mood rather than an ailment. That attests to how the word, and its meaning, have shifted.

Jonathan Sadowsky, an award-winning historian at Case Western University who specializes in the history of medicine and psychiatry, has just now written the definitive joint history of what we call "depression" and what other cultures in other times called something else. His new book, "The Empire of Depression: A New History," which is coming out in two weeks, explores how different societies throughout history have interpreted what we refer to now as "depression" and what can be done to help people who suffer from it today.

I interviewed Sadowsky over the phone to discuss his new work. As usual, this interview has been condensed and lightly edited for clarity and context.

What kinds of cultural assumptions are made about depression that you would like to disabuse in your book?

I have a lot of answers to that. First of all, one point that I made that I'd like to emphasize is that psychiatry is a culture itself, and it's of course embedded in a wider culture, but it has to own cultural assumptions.

And one of the points that I'd like to emphasize is that psychiatry tends to foreground affect over the other aspects, like some of the bodily aspects of depression. It doesn't mean it doesn't pay any attention to the physical aspects, but it tends to foreground the affect. And that matters because many people, both in the Western context and in non-Western context, may be themselves in their own minds foregrounding the bodily aspects. So that's one thing.

I think that another cultural assumption that needs to be really addressed is caused by the ambiguity in the language of the word "depression," which I stress throughout the book. The psychiatrist Adolf Meyer proposed this very everyday word. He had his reasons for doing it, but that word "depression" can have a tendency to reinforce an already existing skepticism among some people as to whether this qualifies as an illness condition.

Tracy Thompson put this very well in her book [a memoir about depression] where she said, depressed . . . could mean I was in a fender bender on my way to work or it could mean I had to be hospitalized because the morbidity of my thoughts were crippling my life. I think that that ambiguity in the language gives a sort of conceptual comfort to the too many people who want to deny depression the status of illness.

Ultimately I'm a philosophical pragmatist. And what that means to me is that the question is not whether it meets some checklist of criteria of illness, but what are the gains and losses? The gains are access to treatment because sometimes critics of psychiatry are not so much wanting to not deny people treatment, they're wanting people to go into psychotherapy instead of taking drugs. That's fine. I'm not opposed to psychotherapy or drugs. I'm really of a "whatever works for you" [mindset]. I think a dogmatic advocacy of either drugs or psychotherapy as the sole solution is misguided.

What would you say are the common themes that connect all of these different manifestations of depression — whether it's the Punjabi "sinking heart," whether it's older ideas like melancholia or the Japanese utsushō — what is the common connecting thread?

When I look at local syndromes or past syndromes, like melancholia or sinking heart, I am not proposing in any definitive way that this is really major depression. I'm not trying to translate these local terms into the modern Western idiom. What I'm trying to do is establish that there have been similar syndromes in other places. Now, from a practical point of view, it may in some cases not matter. If somebody is suffering from various symptoms — whether they're gastric or other somatic symptoms — and they interpret this as having something to do with their heart, rather than their brain. If they respond to psychotherapy or if they respond to antidepressants work or if they respond to electroconvulsive therapy, the name may not matter that much. But clinicians working in different contexts do need to understand how their patients understand their bodies.

Now that said, that answer is a little bit of a dodge. My own view is that a severely depressed affect is the common denominator. While there have been certain definitions of depression which have not included that, I personally don't think you can make a diagnosis without that core feature. That doesn't mean, of course, as you know, if you've read the book as you have, that doesn't mean that everybody who has severely depressed affect has depression. But in combination with certain other features, that to me seems to be the core thing.

Whether that depressed affect is to be considered pathological — in the sense of really requiring medical attention — that's something that varies across time and space. Different societies have had different standards. I mentioned of course that sometimes it's the length of time that people invoke. Sometimes it's the severity or the disproportion to external events that seems to matter, but I don't think this is an easily resolved question. I don't claim to have the final answer to how you know.

One last point on this: it's not as if there was for a long time in medical anthropology, an idea that perhaps other cultures, outside of the West, somatize depression more — that is, they express it more in physical complaints that are otherwise unexplainable than they do in affect. Although carefully anthropologists did want to find some evidence of depressed affect as well. But it's important to remember that that distinction between West and non-West on that point, I think it seems to be breaking down a little bit. For one thing, this happens a lot in Western context, in any Western industrialized countries. People go into their primary care doctor. They are having aches and pains or stomach problems, and a clinician can't find a physical cause of this, wonders if there's depression, maybe inquires a little bit more and tries to find out has there also been depressed affect that's lasted a long time and then maybe makes the diagnosis of depression. So it's not exclusively a Western versus non-Western thing.

As you pointed out earlier, regardless of who wins this upcoming election, the other side is going to be very upset, and it's entirely possible by the time our interview is published over the weekend, we won't even know who the winner is yet. So what distinguishes the kinds of emotions that people are going to be feeling — feelings that are based on a specific historical event — from the deeper pathology of chronic depression?

I don't think anybody really knows exactly where to draw the line. I think that one criterion that you can use is, does it last incessantly? Life events, whether they're political or personal, can make people sad. If they remain sad consistently for a very long period of time — and I'm not going to tell you what that amount of time is, because I don't know — that's one reason to start thinking maybe it's an illness.

I also think, by the way that if people don't meet the DSM criteria for major depression and they're just really feeling bad, it might help them to talk to a therapist. I'm a big fan of psychotherapy. I think it helps a lot of people. I think for a lot of people that should be a first resort before turning to medications, but I think if some people feel better taking the medication, they should.

I don't think there's any evidence that antidepressants cure sadness. I think people who are on antidepressants actually could feel sad. They might not be crippled by some of the other pathologies that go along with depression. I don't know if you've ever experienced this yourself, as a person who suffered from depression, but many people who are feeling depressed actually welcome sadness because it's a sort of end to a kind of numbness that they've had inside them.

Another point here is that I don't know that there have ever been any studies of psychological reactions to elections. If there have been, I haven't seen it. But we do know that lots of events lead to increased risk of depression. We know that being a victim of a terrorist attack can increase risk of depression. We know that being involved in a natural disaster can increase risk of depression. But here's the flip side of that: We also know that the majority of people who are exposed to those kinds of events will not actually develop DSM diagnosable depression. They will experience sadness, but that's what the epidemiology says, that the majority of people exposed to these events will not experience symptoms that reach the threshold for a diagnosis.

"The Empire of Depression," by Jonathan Sadowsky, is out from Polity Press on November 23, 2020.