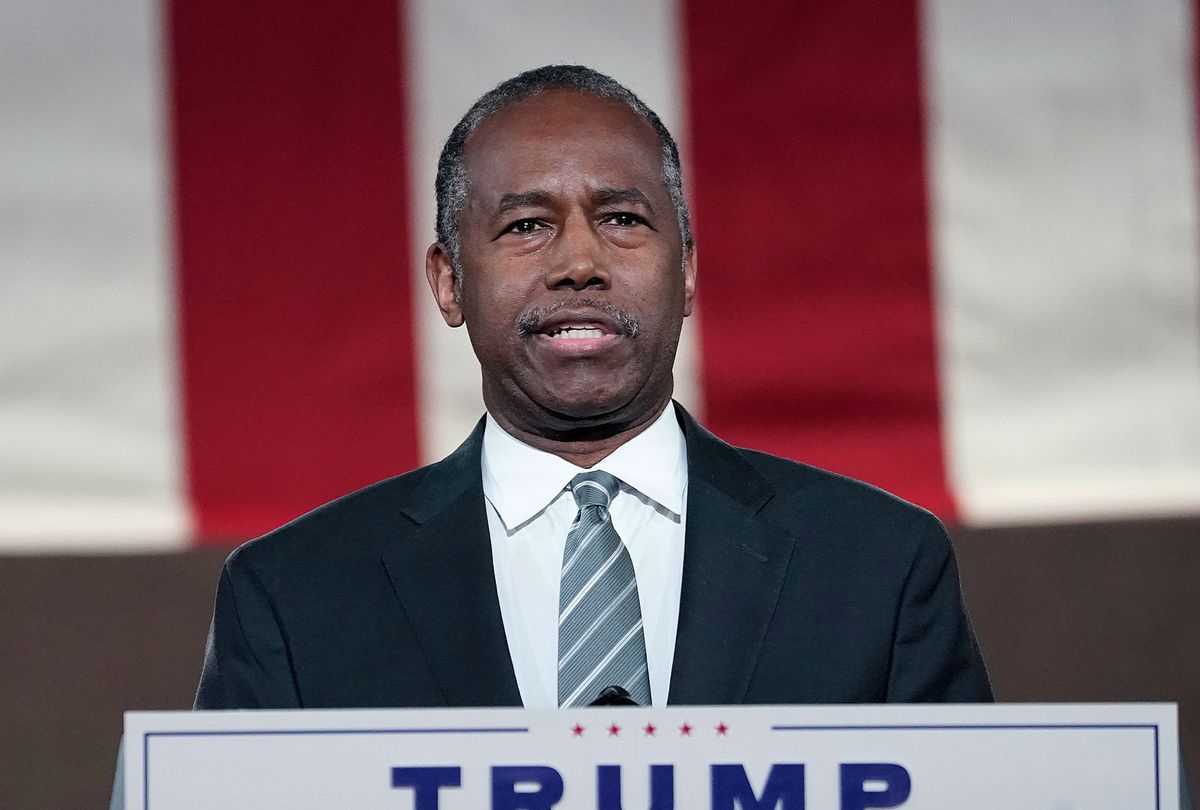 Carson is "in good spirits" after testing positive on Monday morning, his deputy chief of staff told ABC News. The secretary "feels fortunate to have access to effective therapeutics which aid and markedly speed his recovery," reporter Katherine Faulders tweeted.

Andrew Hughes, Carson's chief of staff, said in an email to staff that "anyone who was in contact with the Secretary last week is being notified & precautions are being taken," according to Faulders.

Carson, a longtime medical doctor who is part of the White House coronavirus task force, has repeatedly flouted health guidelines recommending the use of a mask indoors. He did not wear a mask at last week's election night party, which ended with President Donald Trump falsely declaring victory after 2 a.m. on Wednesday morning.

Carson's diagnosis came only three days after White House chief of staff Mark Meadows, who has also refused to wear a mask at events, tested positive for COVID-19. Meadows reportedly tried to hide his diagnosis from the public. Carson is the sixth White House official to test positive since the election.

Vice President Mike Pence's office also had an outbreak last month, which Meadows tried to hide from the public.

Trump continued to hold largely maskless rallies leading up to the election, even after former Republican presidential candidate Herman Cain died from complications of the coronavirus after attending a Trump rally without a mask in in Tulsa, Okla.

"It's emblematic of the national failure to control Covid," Tom Frieden, the former head of the Centers for Disease Control and Prevention, told The New York Times after the latest outbreak.

The U.S. on Monday became the first nation to surpass 10 million confirmed coronavirus cases. The average number of new daily infections has topped 100,000 for days, and experts warned the country may be entering "the pandemic's worst phase yet," The Washington Post reported.

The White House has been "increasingly secretive" about its outbreaks, according to The Los Angeles Times. Many White House officials and party attendees were "kept in the dark about the diagnoses, unaware until they were disclosed by the media."

"The administration was cavalier about the risks of the virus for themselves and for the country," Dr. Joshua Sharfstein, a public health professor at Johns Hopkins University, told the outlet. "And that's one reason why we have so many cases."

"I haven't actually been to the White House since August the 6th, because my impression was their approach to how to handle this is different from mine and what I insisted that we do in the Senate, which is to wear a mask and practice social distancing," McConnell said.

President-elect Joe Biden has vowed to more aggressively respond to the virus after Meadows admitted last month that the Trump administration was not even trying to "control the pandemic."

Biden's transition team announced its COVID-19 task force on Monday would include Rick Bright, the Health and Human Services whistleblower who objected to the White House response, and former Surgeon General Vivek Murthy, who was fired by the Trump administration in 2017 after he refused to resign.

"Dealing with the coronavirus pandemic is one of the most important battles our administration will face, and I will be informed by science and by experts," Biden said in a statement. "The advisory board will help shape my approach to managing the surge in reported infections; ensuring vaccines are safe, effective and distributed efficiently, equitably and free; and protecting at-risk populations."