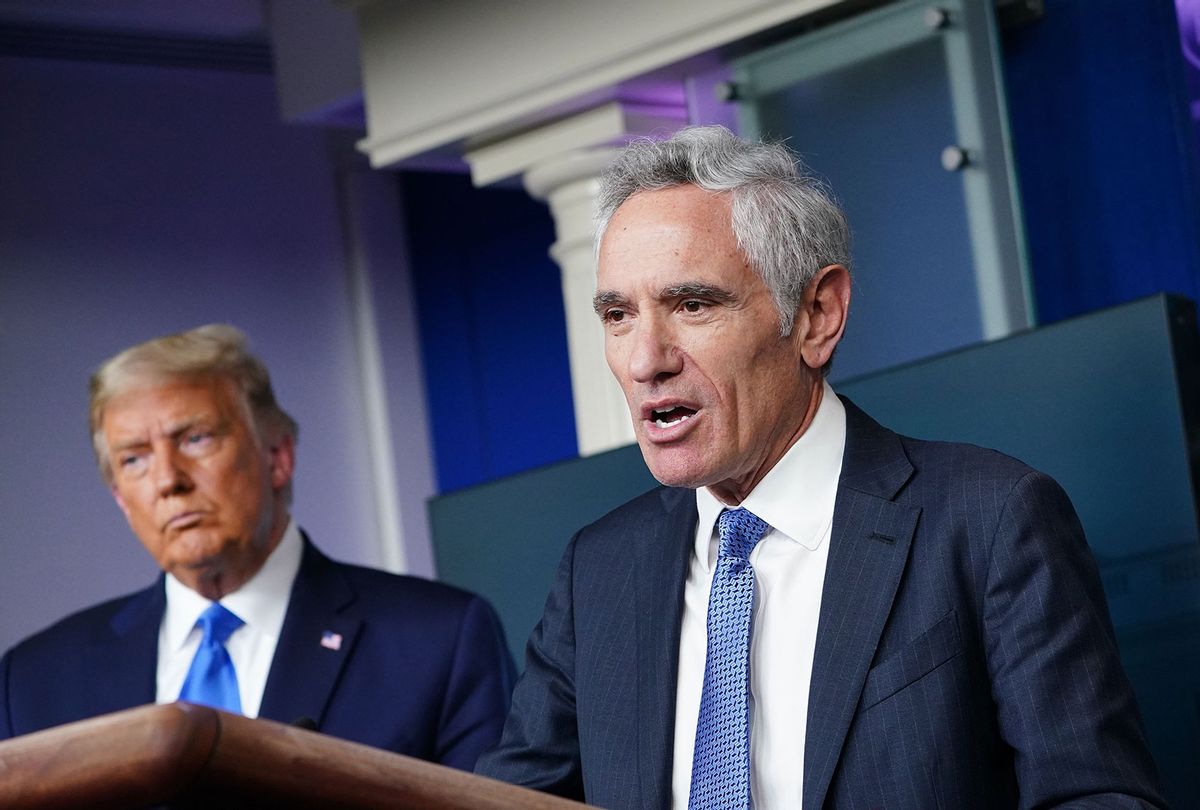 Scott Atlas, one of President Trump's special coronavirus advisers and a faculty member at Stanford University's Hoover Institution in Palo Alto, Calif., is causing a minor fracas among students and faculty at the elite university. Specifically, Atlas' recommendations on coronavirus public health measures fly in the face of scientific consensus, faculty says — a charge that Atlas denies, and which he has threatened litigation over.

During a Faculty Senate meeting at Stanford University late last month, the college's president and provost were asked whether Dr. Scott Atlas should face university sanctions for positions he has taken about the novel coronavirus pandemic that go against the scientific consensus. (As the faculty noted, Atlas is a neuroradiologist, not an epidemiologist or a scholar of infectious disease.) At the meeting, similar questions were raised about the university's relationship with the Hoover Institution, where Atlas is a senior fellow. The Hoover Institution is a conservative think tank located on Stanford's campus that has supported a laundry list of prominent right-wing statesmen over the years, from Condoleezza Rice to Reagan Secretary of State George Shultz.

Unsurprisingly given the politics of his employer, Atlas' public statements tend to delight conservatives and alarm scientists who study public health and infectious diseases. Atlas recently tweeted that masks do not work to prevent infection (an unsupported claim, and one which Twitter wound up taking down for being misleading); previously, he claimed publicly that the threat of the coronavirus is greatly exaggerated. Atlas also claimed that summer civil rights protests were to blame for coronavirus outbreaks, as well as proximity to the U.S.-Mexico border, two more claims for which there is no evidence.

Despite being described by Trump as "one of the great experts of the world," Atlas is reported to not have expertise in infectious disease mitigation or public health. Most recently, Atlas raised eyebrows last week for appearing on Russian state broadcaster RT, which is registered with the Justice Department as an agent of the Russian government.

David Spiegel, a medicine professor and associate chair of the Department of Psychiatry and Behavioral Sciences, claimed during the late October meeting (which occurred before the RT interview) that Atlas is the "latest member of the Hoover Institution to disseminate incorrect and unscientific information about the coronavirus pandemic," according to Stanford News. He also accused Atlas of violating the American Medical Association's Code of Ethics and claimed that he may have additionally violated Stanford's Code of Conduct.

University President Marc Tessier-Lavigne responded by citing the college's Statement on Academic Freedom, although the provost acknowledged the validity of engineering professor Stephen Monismith's concern about a New York Times report that some of Trump's senior economic advisers had briefed the Hoover Board of Overseers about the dangers of COVID-19 and shared that information with parts of the investment world. Provost Persis Drell responded that the involved individual resigned and that the many others who attended the same meeting did not share that person's account of what happened.

Who is Scott Atlas?

Atlas' profile on Stanford University's website says that he studies how government and private sector policies impact the access to and quality of health care. After Trump was apparently impressed by his Atlas' appearances on Fox News, the neuroradiologist was invited to join the president's coronavirus task force over the summer. During his time there, Atlas allegedly pushed for a "herd immunity" approach to addressing the pandemic, downplayed the potential threat presented to children and questioned the use of masks.

Although Atlas has tried to deny that he has pushed the Trump administration toward a "herd immunity" policy, he told Fox News in a July radio interview that "when you isolate everyone, including all the healthy people, you're prolonging the problem because you're preventing population immunity. Low-risk groups getting the infection is not a problem. In fact, it's a positive."

During his RT interview last week, Atlas said, "if you wanna know what's happening right now, I think there's a gross distortion that has sort of been typical of the reporting on this. And that is that there's this frenzy of focusing on the number of cases when we see a lot of reasons to be sort of, you know, cautiously optimistic here rather than fearful."

In response to Atlas' rhetoric, a group of 98 Stanford physicians and researchers affiliated with Stanford Medicine published a public open letter in September lambasting Atlas for making what they said were false claims and pushing bad science.

"Many of [Atlas'] opinions and statements run counter to established science and, by doing so, undermine public-health authorities and the credible science that guides effective public health policy," the letter read. "To prevent harm to the public's health, we also have both a moral and an ethical responsibility to call attention to the falsehoods and misrepresentations of science recently fostered by [Atlas]," it continued.

The letter then went point by point and refuted Atlas' claims about face masks, social distancing, asymptomatic transmission, child susceptibility to infection and about his supposed belief in "encouraging herd immunity through unchecked community transmission."

Atlas responded to the letter by defending his positions and threatening to sue.

But in addition to the 98 Stanford Medicine faculty who spoke out about Atlas' views, other public health experts, too, believe that Atlas "misunderstands" the science behind the coronavirus. Holden Thorp, the editor-in-chief of Science Magazine, also tweeted his dissatisfaction with Atlas after the doctor claimed that "top scientists all over the world" support Trump's response to the pandemic.

"No they're not. I would know," Thorp tweeted.

"I strongly endorse and agree with the letter from Atlas's colleagues that he does not understand, or is purposefully misunderstanding, the nature of the virus, this pandemic, and appropriate control activities," Dr. Alfred Sommer, dean emeritus and professor of epidemiology at Johns Hopkins Bloomberg School of Public Health, told Salon by email.

Dr. Anthony Fauci, the nation's top infectious disease expert, has also expressed reservations about Atlas' views. In September he told CNN he was "concerned that sometimes things are said that are really taken either out of context or actually incorrect," particularly drawing attention to how the "data [was] very strong" about the importance of wearing masks in protecting people from coronavirus infections.

"Masks are important for catching droplets and microdroplet aerosols expelled while talking and breathing (not just sneezing or coughing), which was just recognized by WHO [World Health Organization] and 239 scientists," Dr. Eric Feigl-Ding, Senior Fellow at the Federation of American Scientists, told Salon by email in May.

Atlas' views on herd immunity are also belied by recent studies that suggest herd immunity is not possible to achieve, because the coronavirus appears not to confer long-term immunity on patients who have recovered from it. A study of roughly 365,000 people released by researchers at the Imperial College London last month was one of several that suggest being infected with the novel coronavirus does not provide "durable immunity," or long-lasting immunity, to patients. The most recent study noted that, instead of people developing more antibodies to the novel coronavirus over a period of three months (which their immune systems would then use to fight COVID-19), antibodies fell by roughly 26% during the period in question.