Trump lost — but did democracy really win? That depends on us

Boy, did we need that extraordinary day of celebration — but one election can't resolve the crisis of democracy 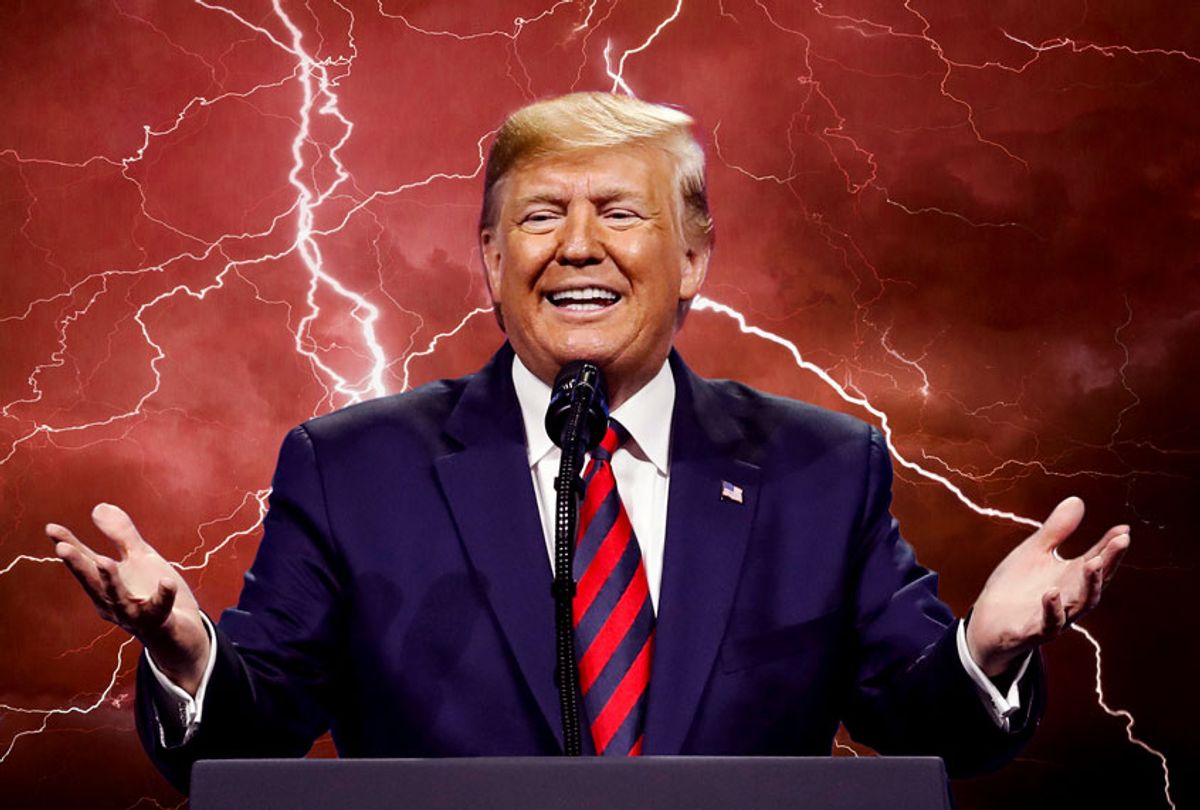 What unfolded across the United States on Saturday afternoon was breathtaking: an extraordinary explosion of relief and exuberance, not quite like anything else most of us now living have ever seen. While the comparison to V-E Day — which marked the defeat of Hitler and Nazi Germany in May 1945 — may be over the top, the emotional resonance was similar.

I wasn't expecting that at all, to be frank. Joe Biden was the ultimate compromise candidate, the ne plus ultra of "good enough for now," a potential safe harbor in a time of crisis. But the effect of Biden's ultimate victory — or, more to the point, of Donald Trump's defeat — was undeniable, and the national mood was impossible to resist. It almost felt like a physical sensation, literally as if a great weight had been lifted from my shoulders, and from the evidence, millions of other people felt the same way.

I only witnessed all those celebrations on social media and cable news, mind you. I've spent the last several months in a tiny village in central New York State — a liberal-leaning oasis in a deep-red region — and around here you wouldn't have had any idea that a major historical event had just occurred. Political signs for both candidates have already disappeared from most people's front lawns. Since about Thursday afternoon, I've seen no sign of the huge pickup trucks festooned with gigantic Trump flags that have become a fixture of rural life in America. The supermarket in our town was as busy as you'd expect on a beautiful Saturday evening in the fall, but I didn't hear one word about the election.

What has America gained, after this agonizing election and an agonizing week of vote counting? (OK, it was five days, which felt like years or geological epochs.) And what have we lost? I don't think we will know that for quite a while.

There is no question that this election, in which a clear majority of American voters repudiated the Trump presidency, was a triumph for democracy, on various levels. That's what we're all feeling right now, I think, and it's undeniable. But it's a triumph that comes with a warning, and wrapped in a paradox.

Joe Biden received more votes than any candidate for president in American history. By a lot. He's gotten 75.2 million votes so far, and with significant numbers still to count in major blue states like California, Illinois and New York, could easily hit 77 million or so. (The previous record was Barack Obama's 69.5 million in the landslide victory of 2008.)

But in a must-read piece for Salon on Saturday, Chauncey DeVega observed the observable, to borrow a phrase from Joan Didion that should be better known than it is. If Biden will be No. 1 on the all-time vote list, the No. 2 spot belongs to none other than President Boaty McBoatParade himself, who is currently biding his time rage-cheating at golf and sending hopeful "U up?" texts to Justice Amy Coney Barrett.

In other words, while Biden's victory is not in doubt — whatever fanciful theories to the contrary Trump and his acolytes have to offer — the notion that Trump and his so-called movement have been conclusively rejected certainly is. Trump has almost 71 million votes to this point, roughly 8 million more than he received while squeezing out an electoral victory in 2016. He increased his margin of victory in numerous red states, and also in supposed battlegrounds like Ohio and Florida. (Obama won those states twice, but both now appear out of reach to national Democrats.)

As you already know if you're attuned to the endless cycle of Democratic Party infighting and recrimination — which I do not recommend, if you value your mental well-being — Democrats lost several Senate seats they expected to win, and now must hope for a double miracle in Georgia to regain the majority. They've also lost at least a few seats from the House majority they won in 2018, and will face a midterm election in 2022 that looks favorable for Republicans, both in demographic and historical terms. Biden's entire first term will almost certainly feature Mitch McConnell in control of the Senate. (McConnell's hashtag-Resistance opponent in Kentucky, Amy McGrath, soaked up countless millions of small-donor dollars — and couldn't even break 40 percent.)

That sense of contradiction — and of partial victory, even in defeat — accounts for at least some of the extraordinary truculence coming from Republicans, who are by no means ready to cut the Trumpian cord, even by recognizing political reality. Only a handful of GOP normies, like Sen. Mitt Romney, Gov. Larry Hogan of Maryland and former President George W. Bush, have even bothered to extend ritual congratulations to Biden.

All other prominent Republicans are either bunkered down in total silence, like McConnell, or all-in on dead-ender Trump conspiracy theory. Gov. Kristi Noem of South Dakota, a potential 2024 candidate who really ought to be occupied with her state's worsening COVID outbreak, appeared on ABC's "This Week" on Sunday and refused to acknowledge that Biden had won the election. She cited alleged "illegal activities" and "clerical errors," without explaining how any such claims might be sufficient to overturn the results in multiple states.

In an attempt to summon the ominous specter of the Supreme Court's Bush v. Gore decision, Noem asked: "We gave Al Gore 37 days to run the process before we decided who was going to be president. Why would we not afford the 70.6 million Americans that voted for President Trump the same consideration?" That moronic rhetorical question would be profoundly disturbing if it weren't pathetic, and I guess it can be both.

There's been rather too much whimpering about "democratic norms" over the last four years (short version: Donald Trump farts in their general direction), but I don't think Trump and his inner circle realized until this weekend that certain of those norms lay outside their control. When Rudy Giuliani's "news conference" in the parking lot of a Philadelphia landscaping business — perhaps the most exquisitely bizarre moment of the entire week — was interrupted by the news that all the major networks had called the election for Biden, Giuliani made a manful effort at mockery: Oh, the networks! Who cares about them! It didn't work, and perhaps Rudy's great moment was swept away.

What followed was a well-worn narrative of the liberal-democratic tradition: Everyone cares what the networks say, it turns out. Everyone in the media (including the hosts on Fox News) began to describe Biden as the president-elect, and every major broadcast network and cable-news channel aired his victory address on Saturday night. Then came the flow of congratulatory messages from foreign leaders. It must have been hurtful, and perhaps incomprehensible, for Trump to see such purported allies as British Prime Minister Boris Johnson, Indian Prime Minister Narendra Modi and even — unkindest cut of all! — Israeli Prime Minister Benjamin Netanyahu, all extending the ritual greetings and good wishes called for by the moment. How many desperate calls did Jared Kushner place to Jerusalem this week, to be politely returned by no-comment tertiary underlings?

Since Trump understands nothing about politics or power, he couldn't possibly have grasped that those leaders are invested in their relationship with the world's greatest military and economic power, battered as it may be, and do not give a solitary crap about him personally or about his idiotic schemes to stay in power by way of 8chan conspiracy theories. Furthermore, those people are all more or less invested in the liberal-democratic order — having won elections that way and everything — and aren't especially psyched to hear a condo salesman who fluked his way into the White House telling the world that the whole thing is a fraud.

That democratic narrative still possesses an inexorable power, and it may slowly be sinking in at 1600 Pennsylvania Avenue that there's no road that leads backward from here. At least not this time. But how long that collective narrative can be sustained, when an ever-larger proportion of the public no longer buys into it, is an open question. There are early indications from exit polling that Trump may actually have improved his vote share, relative to 2016, among several demographic groups, including Latinos, white women and Black men. As individual data points those seem nonsensical, given the abundant and unconcealed racism and misogyny driving the Trumpian movement. As part of a larger picture — a picture that isn't just American but global in scale — they make slightly more sense.

One presidential election, won by assembling an emergency coalition and largely throwing ideology to the wayside, cannot resolve the crisis of democracy. For hundreds of millions of people across the "Western" zone of so-called capitalism and so-called liberal democracy, the economic and political system appears to be a dysfunctional scam that locks in inequality, squelches opportunity and condemns many or most people to precarious lives of wage-slave drudgery, bottomless debt and pointless consumerism. Many of those people are prepared to consider alternatives to the current situation, even when those alternatives appear — at least to the privileged and educated classes — to be warmed-over authoritarian drivel, delivered by a patently insincere second-rate celebrity.

If it sounds like I'm winding up to tell you that the Democratic Party must embrace a bold progressive agenda, or that Bernie Sanders and Alexandria Ocasio-Cortez could have led the party to glorious victory from coast to coast, I'm not. That's one possible conclusion, but there's no one-size-fits-all solution to the democratic (or Democratic) dilemma.

Centrist Democrats like Rep. Abigail Spanberger of Virginia (a former CIA agent) are eager to blame Black Lives Matter rhetoric or "socialism" for whatever went wrong this year. Leftists of course blame the party's perennially muddled, middle-path messaging. Both sides have a point, honestly: Eventually the Democratic Party has to figure out what it stands for, in the context of 21st-century reality, and exactly where and how it's willing to fight. "We're not the fascists" worked medium-well this time around, but it's not much of a long-term program.

An impressive number of Americans — a clear majority of the electorate — voted last week to give our damaged democracy another chance, on the presumption that it offers the best chance of addressing our deep-rooted social and economic problems. A somewhat smaller number, yet still enormous by any standard and unprecedented in historical terms, voted for something quite different: Let's call it a quasi-imperial state, presided over by a professional con man with orange skin and cake-frosting hair who has failed at everything he's ever done — except television stardom! — and who thrives on ignorance, bigotry, cruelty and greed.

It's impossible to say where all this is heading, but it does no good to avoid the essential nature of the conflict. On one side are those who want to reassert or restore the long-established rules of political engagement, after what they hope was a momentary interruption. Those on the other side have long since concluded that the rules no longer exist or do not apply to them, or at best are only tools to be cynically deployed in the naked quest for power.

No democracy can long survive such a predicament, where the competing parties do not accept the same basic premises, and do not even perceive the same political reality. That second camp — the no-rules, fuck-your-democracy party — has suffered a defeat in this election, and will gradually and begrudgingly stage a strategic retreat. Its nominal leader will be forced into exile, and his supporters will grieve, after their own gruesome fashion. But nothing has happened in 2020 to break their will, or to convince them they are wrong.