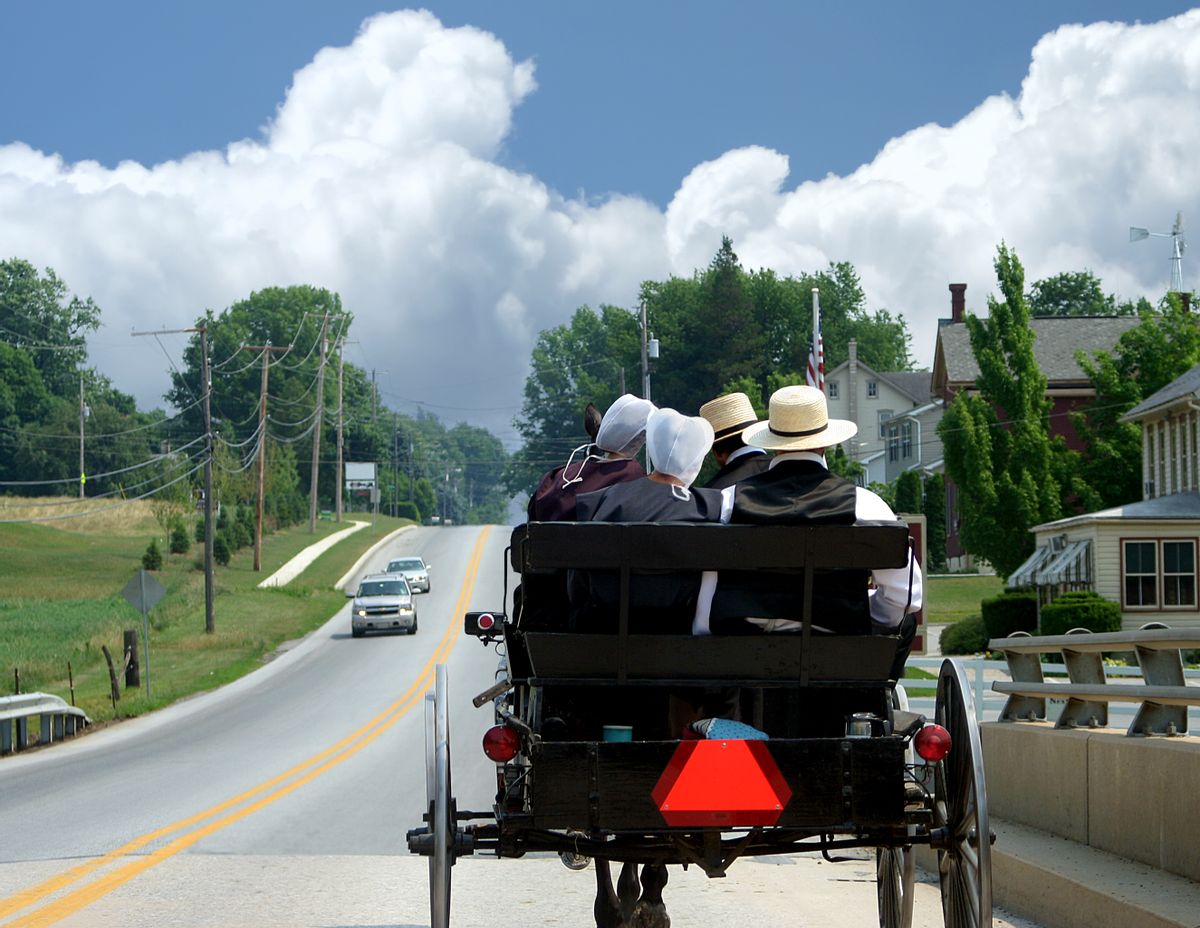 This open buggy appears to be heading right into a storm. Lancaster County, PA. (Getty Images)
--

A Super PAC founded by Trump-supporting Republicans who tried to make inroads with Amish voters in Pennsylvania has ended the 2020 cycle in the black. President Donald Trump, meanwhile, has finished down more than 65,000 votes in the state so far.

Amish PAC, funded in large part by a secretive Colorado billionaire and a Louisiana-based oil executive, was created during the 2016 Republican primary by a pair of GOP strategists. One of them was a former member of the socially conservative community, who saw an opportunity for voter outreach.

"The PAC's founders saw that the GOP was doing nothing to reach out to a large and growing potential voting bloc that shared its values of limited government, focus on rural issues and small business empowerment, and saw a need to engage them," a PAC spokesperson told Salon in an email.

The spokesperson said "the team has since changed a bit" since then. Both co-founders — Ben Walters and Ben King — are no longer active members of the PAC.

The PAC's website does not disclose the group's current members. The only publicly available information can be found in the group's filings with the Federal Elections Commission (FEC), which list Taylor Swindle as its treasurer. Swindle is also treasurer of Troops Abroad PAC, which shares an Arlington, Va., address with Amish PAC, according to the groups' websites.

Frank "Scotty" Moran, who runs Moran Oil, gave more than $46,000 to the 2020 cycle. Reclusive Aspen billionaire Tatnall Hillman has contributed a total of $15,000. Christopher Carlino, who identifies himself in his filing as an "investor" and appears to be a partner in a Philadelphia construction firm, gave the group $10,000 on Sept. 11, 2020. Carlino does not appear to have made any political donations prior to June 2020, when he began giving to Trump, according to federal filings.

Though they are all Republican donors, internet searches conducted by Salon did not turn up connections between the three men and the Amish community.

The PAC said it put that money towards billboards and ads in Amish newspapers, encouraging members of the community to register to vote.

"At a time when there's been billions of dollars flooding into TV and Facebook ads, it's been refreshing to focus on old-fashioned Amish friendly mediums," a group spokesperson told Salon.

This cycle, however, the group chose not to promote a specific candidate.

"We didn't want to be perceived as telling Amish who they should vote for," the spokesperson said. "The goal was simply to answer their questions about getting registered to vote and let them make up their mind from there."

The PAC said it focused its ads issues of concern to the Amish community.

"This year, the Lancaster Amish were impacted by a high-profile kidnapping and likely murder that shook their community," a spokesperson said, pointing also to "racial protests in Lancaster;" trade fluctuations, which affected farming; and coronavirus shutdowns, which impacted the tourism industry.

"So we've found that while voting has still not been widely embraced by the Amish, they have plenty of reasons to become more engaged in choosing their representatives," the spokesperson said.

As for its successes, the group said its hotline received "hundreds of calls" from Amish curious about registration.

"The calls far outnumbered what the PAC received in 2016," the spokesperson said, adding that while community interest appears to be growing, participation would likely not increase dramatically without the endorsement of church leaders.

Going into 2020, Dr. Kyle Kopko of Elizabethtown College, an expert on the Amish, calculated that of the 15,055 Amish eligible to vote in Pennsylvania, only 2,052 were registered. Of those registered voters, only 1,016 cast a ballot in 2016.

The turnout record among the Amish was set in 2004, when former president George W. Bush visited the community during his re-election campaign and openly courted its vote. A total of 1,300 voted that year, the spokesperson said.

As for whether they beat that number, the spokesperson said, "We'll evaluate whether we did once the dust settles."

"In 2016, we almost never heard from Amish women," the spokesperson added. "This year, we heard from countless Amish women. They've traditionally been much, much less likely to vote than men, but that's changing! We're very excited to see women becoming so much more engaged and making their voices heard."

As for its spending, Open Secrets data shows the group's biggest vendor is a company called District List Company LLC, which is registered in Delaware and otherwise untraceable. The only other group to use District List as a donor? Swindle's Troops Abroad PAC. Amish PAC said District List handled all of its media buys.

"Keep in mind that this breakdown doesn't include any of our October spending on media," the PAC spokesperson said, adding that the group had spent "a ton" ahead of voter registration deadlines that month.

"Basically, if calls kept coming, and the Amish showed interest, we kept the ads going," the spokesperson said.

As for its accomplishments, the spokesperson was vague.

"We know for sure we registered new voters this year," the spokesperson said.

The spokesperson would not disclose to Salon who ran District List Company LLC.