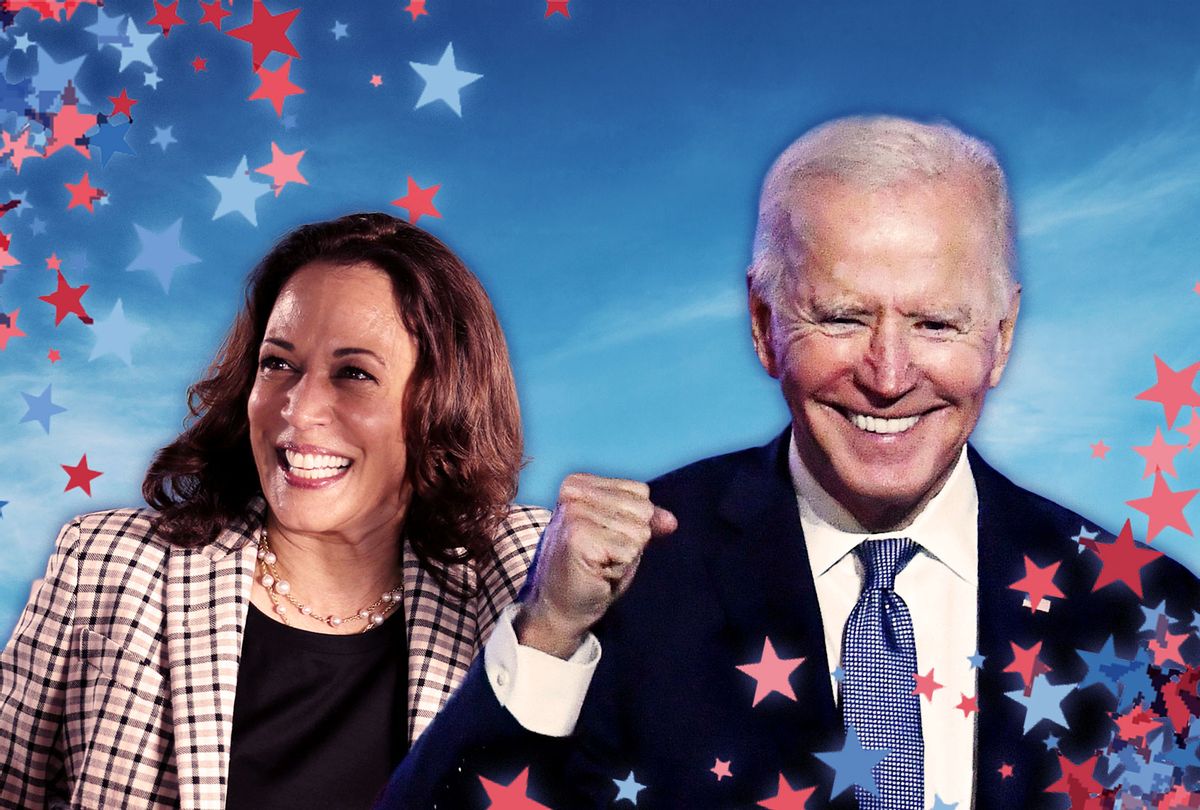 Joe Biden has finally been elected as the 46th president of the United States, according to the Associated Press, CNN, the New York Times and other major media outlets. On Saturday morning, after the former vice president took a 34,000-vote lead in Pennsylvania — just above the 0.5% threshold that would have dictated a recount — AP called the Keystone State, and the presidential election, at 11:28 a.m. Eastern time. With that, Donald Trump's contentious and divisive presidency apparently draws to a close.

According to numerous reports from news sources and social media, celebrations of Biden's victory have begun to break out in major cities across the country, on a beautiful fall day on the Eastern seaboard and throughout most of the nation.

President-elect Biden and Vice President-elect Kamala Harris will address the nation at 8 p.m. Eastern time from outside the Chase Center in Wilmington, Delaware, according to the AP. All major broadcast networks and news networks will carry the speech live.

President Trump was reportedly playing golf at a course he owns in Virginia at the time Biden was declared president-elect. He has not yet conceded defeat, in yet another departure from the norms of electoral politics, and there are no signs he will do so anytime soon.

The president issued a statement in his typically combative and borderline-nonsensical style soon after the AP election call, which began: "We all know why Joe Biden is rushing to falsely pose as the winner, and why his media allies are trying so hard to help him: they don't want the truth to be exposed." The statement observed that Biden "has not been certified as the winner of any states," which is true — because no states certify their final votes for several weeks after Election Day. Trump further alleged that his campaign "has valid and legitimate legal challenges that could determine the ultimate victor," without clarifying what any of those might be.

Representatives of Trump's campaign, led by former New York mayor Rudy Giuliani, were holding a news conference in Philadelphia to discuss alleged voting irregularities in Pennsylvania at virtually the same time as the AP announced Biden's victory. Giuliani appeared taken aback by the news that all the major news networks had called the election, and the press conference rapidly veered off the campaign's apparent script.

This long-delayed moment brings an end to an extraordinary five-day vote count during which time seemed suspended for many Americans, while rumors and conspiracy theories flowed freely on social media. Results have remained in doubt in several states ever since election night — and at this writing, Alaska, Georgia and North Carolina have still not been called by any major media organization for either candidate. (Biden was declared the winner in Nevada shortly after the Pennsylvania call.) Biden holds a narrow lead in Georgia, which is heading for a recount. Trump seems certain to win Alaska and likely to win North Carolina, but those states may not report final vote totals for days or weeks.

As a result, the final electoral vote total will not be clear for some time. The AP currently has Biden at 290 electoral votes, because that organization called Arizona for Biden several days ago, whereas other media outlets have not done so. The New York Times credits Biden with 279 electoral votes. (At least 270 are required to win the election.) Biden's final total could be as many as 306 electoral votes, while Trump will likely finish with at least 232. The final result could well wind up as a virtual mirror image of the 2016 count, won by Trump over Hillary Clinton, 304 to 227.

In any event, Biden has won a conclusive victory in the popular vote, in an election with a remarkably high turnout. With vote counting not yet complete in a number of large states — including New York, California and Illinois, where millions of Democratic-leaning votes remain uncounted — Biden currently has about 74.5 million votes, or 50.5% of the total, to 70.3 million for Trump, or 47.7%. Both candidates in this race received more votes than any previous presidential candidate in U.S. history, one of many reasons why the 2020 election will long be remembered as an extraordinary event.

Multiple news outlets have reported that Trump has told friends and advisers he has no plans to concede. Biden campaign spokesman Andrew Bates responded to the reports by predicting the president would be escorted from the White House if he refuses to leave.

"As we said on July 19th, the American people will decide this election," Bates said in a statement. "And the United States government is perfectly capable of escorting trespassers out of the White House."

A statement from the Trump campaign on Thursday protested the "false projection of Joe Biden as the winner" and argued that there were "irregularities" in Pennsylvania and Nevada that might affect the result, though the campaign's legal challenges have thus far fallen flat. The campaign also predicted a victorious recount in Georgia and an "outright" win in Arizona, although both those outcomes seem doubtful — and have now been rendered irrelevant. At this point, there is no realistic way for Trump to overturn the verdict of the voters in numerous states.

Biden's long-expected victory comes after Trump's repeated and blatantly false claims of voter fraud in states where Biden has won or holds the lead. On Wednesday, the president even attempted to declare victory, via Twitter, in states that had not been called, and where he has now been conclusively or apparently defeated. Trump has also demanded that officials "stop the count," though there is no legal reason to halt the counting of valid votes.

Although some Republicans have echoed Trump's false claims about the vote count, other GOP lawmakers have begun publicly speaking out against his inflammatory rhetoric.

"The president's allegations of large-scale fraud and theft of the election are not substantiated," Sen. Pat Toomey, R-Pa., said on Friday. "I'm not aware of any significant wrongdoing here."

"There is no defense for the President's comments tonight undermining our Democratic process," said Maryland Gov. Larry Hogan, who said he cast his vote for Ronald Reagan. "America is counting the votes, and we must respect the results as we always have before."

Biden campaign attorney Bob Bauer said the suits were legally "meritless" and only intended to "create an opportunity" for the Trump campaign "to message falsely about what's taking place in the electoral process."

Some Trump allies have even floated the idea of Republican-led state legislatures appointing electors that would override the popular vote result in their states to back Trump. Although the Constitution allows for that possibility, nothing similar has occurred since the 19th century. Republican legislative leaders in Pennsylvania again rejected that idea on Friday.

"We have said it many times and we will happily say it again," state Senate leader Jake Corman and House leader Kerry Benninghoff, said in a joint statement. "The Pennsylvania General Assembly does not have and will not have a hand in choosing the state's presidential electors or in deciding the outcome of the presidential election."