Like Reagan, Trump and Pence have invoked God to justify their policies and to cement power 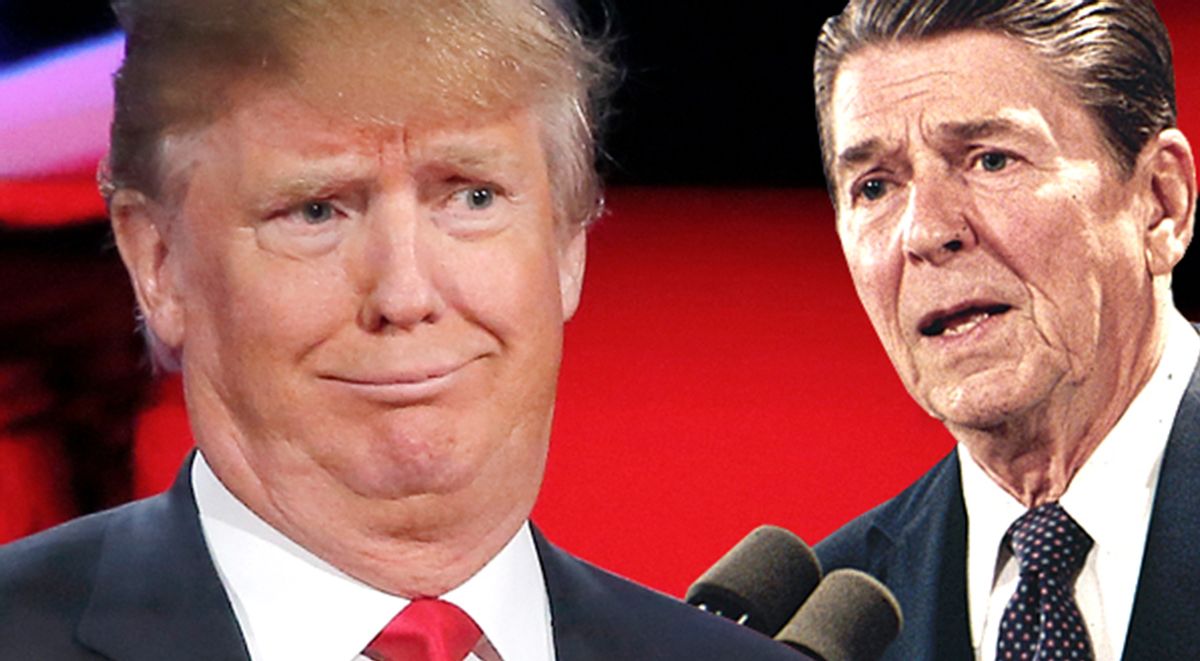 If a ballooning federal deficit, tax breaks for the wealthy, rising income inequality, structural racism and cowboy diplomacy sound familiar, it's because they were big issues in the 2020 presidential race.

But they're not new. They also dominated the 1984 contest between Ronald Reagan and his Democratic challenger, Walter Mondale.

Then, as now, Americans faced a bevy of social, economic and political issues that, depending on presidential leadership, would define who they were as a nation. And then, as now, millions voted out of concern for their personal finances rather than address the challenges roiling much of the country.

My research on Ronald Reagan, religion and the news media explores how the 40th president deployed religious ideas to shift Americans' notions of a good society. Many leaders have invoked God to justify their policies and cement their power.

Reagan was more successful than most, but President Donald Trump and Vice President Mike Pence use a similar strategy.

FDR's policies reflected the economic and political realities of the 1930s and 1940s. But they also tapped into the Social Gospel, a vein of American religion that advocated for social as well as individual salvation through justice and systemic change.

FDR's welfare liberalism lasted through the 1970s, when social turmoil and economic recessions made many Americans fear for their financial well-being as well as the nation's. But Ronald Reagan's message of hope and his belief in America's divine destiny helped him win the 1980 presidential race.

Reagan linked American exceptionalism, particularly its role as a "shining city on a hill" to neoliberal ideas including a limited government, tax cuts and reduced social services. At its heart, neoliberalism views every aspect of civic, social and cultural life in terms of the market economy.

According to Reagan, God blessed democracy, free markets and religious liberty. Therefore, Americans should, too.

It's the economy, stupid

In September 1983, William Raspberry, at the time one of the country's few Black columnists, wrote in The Washington Post, "Forget war and peace, forget fairness, forget the federal deficit. None of it matters for this election. The only thing that matters is whether individual voters think their personal finances are more likely to improve under a Mondale administration or a second Reagan term."

Raspberry predicted the rise of "pocketbook selfishness" after seeing a Washington Post-ABC poll that revealed many voters would put their own interests above those of the nation.

A majority of respondents said that Democratic candidate Walter Mondale was more likely than Reagan to "reduce the threat of nuclear war" and "be fairer to all segments of the population." They agreed with Mondale's political views and felt the "national economy was getting worse under Reagan." But they still backed the incumbent. They explained their support by saying that Reagan would ensure they were "better off financially."

Noting that voters typically explained their choice of candidates as a product of aligned views, Raspberry surmised, "Reagan has made greed an acceptable attitude."

A Washington Post feature story put Midwestern names and faces to the poll. Several suburban housewives explained why they were voting for the incumbent. Sue Daniels of Mequon, Wisconsin, for example, said: "I'm going for Reagan because now I'm one of the haves and he's gonna take a little less from me and give a little less to some of the people who don't have. Mondale's going to give my money to everybody, whether they're down and out because they're lazy or because they're not."

Voters knew Mondale's policies were "fairer" than Reagan's, but many did not seem to care.

Those who did care were public service workers whose income and benefits were affected by federal cutbacks, and low-income citizens who knew that Reagan's policies penalized them. According to the Post's reporters, "the strongest feelings on the fairness issue are heard in the black community on (Milwaukee's) Northside."

Local statistics underscored why: failing schools, packed soup kitchens, and swelling welfare rolls. But, according to Reagan, whose views were mainstreamed by the news media, many Americans were on government assistance. That's why he wanted to cut taxes. If the IRS collected less money, then the budget for social services would be reduced, which would force welfare recipients to find jobs.

In the neoliberal worldview, Reagan was doing a favor for the millions on welfare. He was fostering their moral and religious growth by making them find jobs and become responsible citizens.

On Tuesday, some 69 million voters likely agreed that Trump was making America great, when they cast votes for his second term.

The majority of those voters are not white supremacists, evangelicals or members of QAnon. They are white, Black and brown men and women who believe that Trump is a good businessman and that his economic policies will help them.

In the words of the Pittsburgh Post-Gazette, which endorsed the president, "Isn't the real question whether he has been taking the country, and the economy of this region, in the right direction these last four years? Can we separate the man from the record?"

Americans may disagree on whether the country's pre-COVID-19 economic boom was a result of Trump's policies or those put in place by the Obama administration. But, as I see it, one thing is clear: The nation's commitment to greed and selfishness remains strong.

Reagan's spiritual neoliberalism, sanctioned and sanctified by God's blessings and accepted even by some atheists, secularists and non-Christians, still holds many Americans in thrall.

Joe Biden and the 73 million-plus Americans who voted him will need to counter that worldview with a different vision of what it means to be a good American in a good society.