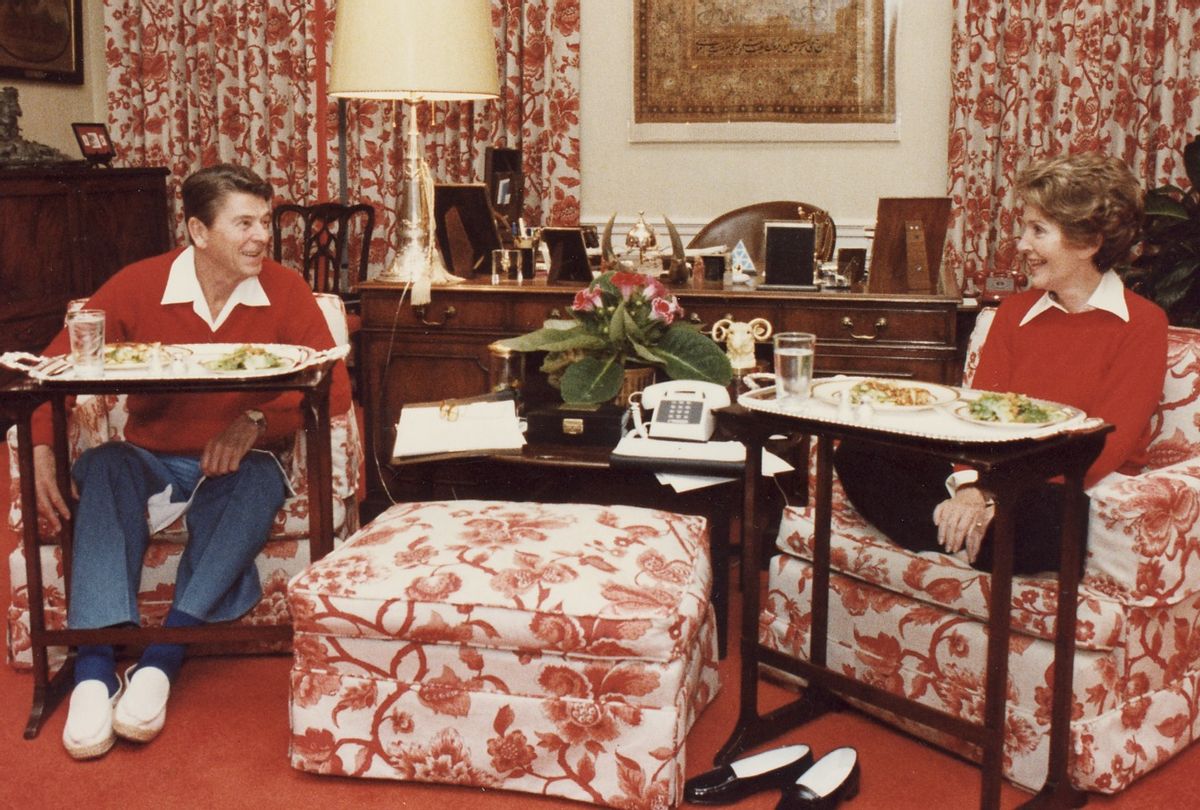 Ronald and Nancy Reagan for "The Reagans" (The Ronald Reagan Library)
--

Forty years after Ronald Reagan's ascent to the presidency his legacy is still treated with kid gloves. Centrist Democrats seeking to find common ground with Republicans quote him as if he were a saint, the modern example of a conservative with bipartisan appeal save for, you know, a few mistakes he could not recall. In 2003 CBS was set to air a fictionalized miniseries that romanticized Ronald and Nancy Reagan but was hounded by the GOP until the network shunted it off to Showtime, the same network airing Matt Tyrnauer's new docuseries "The Reagans,"

"The Reagans" doesn't adequately dig into who Ron and Nancy were or tell us much of anything we don't already know about them within its four hours. But at some point somebody should.

This missed opportunity is but one on a list that anyone seeking to understand Reagan's presidency will lament after spending time with it. "The Reagans" isn't terrible, but merely serviceable – not particularly flattering, but not all that enlightening either.

At least the premiere's timing is fortuitous, given Tyrnauer's focus on the Reagans as conduits for the Republican mission to bring the Southern strategy into full fruition within the Republican party. There's also ample reason to presume that many people are ignorant as to the very basic facts about the less flattering side of Reagan's history beyond the catchy aphorisms about "morning in America" or the shining city on the hill mythology.

From the very start, the director's intention to link then to now is crystalline when journalist Lesley Stahl recalls a Reagan observation that stuck with her over the years. "'If you are not a good actor, you cannot be a good president,'" she recalls him saying, "And it came to pass. If someone's running for president and they are not willing to do what an actor does – look good, read your lines well – you cannot lead."

This bit of implication plays well in 2020. Beyond it, much of the series' early examination of Reagan's rise in politics is relatively shallow, leaning heavily on shots from old Hollywood to reinforce the mythmaking nature of the actor's initial forays into politics, and the similarities between Hollywood political machinery and the one grinding up Washington.

Observations from son Ron Reagan lend additional insight into the president and First Lady as parents and private people and serve to remind us that in spite of their flaws, they're still human beings. Nevertheless, what Reagan lends is limited. His father enacted destructive policies that hurt America's poorest even though he grew up in a family that benefited from many of the same government safety nets he ripped away. It would be fascinating to find out what fueled such a lack of empathy, but I regret to inform you that tax reform activist and right wing lickspittle Grover Norquist has no answers.

To watch "The Reagans" and hear Tyrnauer's relatively limited gallery of experts describe the direct parallels between Reagan and Donald Trump without explicitly mentioning the latter is a reminder that Trump represents the apotheosis of a destructive political ideology as opposed to an aberration.

Reagan had moves way back when that are easily recognizable to anyone who spent the last five years drowning in Trumpland. "Make American Great Again" is directly cribbed from the Gipper; if you weren't aware of that the series handily reminds us this is the case. As civil rights activist Maya Riley puts it, "Reagan's genius was that he wrapped his racism in a façade of fatherly love. And it was something that Black people in this country understood was a façade. And we understood it from his words and his deeds."

Several of the film's experts use the term "genius" in reference to Reagan, but the documentary doesn't adequately make the case for his genius. Instead "The Reagans" chips away at the veneer of folksy character surrounding the man by peeling back the rhetoric to spell out the true meaning behind noble sounding terms such as "small government," which sounds like it's preaching support for putting more money back into the pockets of regular Americans but is actually a cover for cementing power and privilege for the upper class.

Presumably if you're reading this, you have survived the last 30 years of right wing partisan hackery and therefore you already know this. You might also know that Reagan is the first president to hoodwink the working class into voting against their best interests, because to do otherwise would also benefit non-white folks, which "The Reagans" also points out.

At least it's a helpful reminder of the main difference between Reagan and America's outgoing president: Trump dispensed with the racist subtext Reagan pushed in the '80s and simply made white supremacy his main text.

And while that isn't as effective now as it might have been, given that Reagan won the presidency in 1980 with 489 of 538 electoral votes, and only received 14% of the African American vote, 73 million voters tell us that marketing racial animus to white voters is still pretty darn effective.

And while "The Reagans" leaves the viewer wanting in terms of adequately examining the extent of Nancy's influence over Ronald and how that may have manifested in terms of the policies he enacted, where the series is at its best is in examining the method by which Reagan tweaked racist messaging into coded language that spoke to white Americans' racist angst while allowing them to profess that they aren't saying anything racist.

His earliest messages weren't particularly well-disguised as the documentary shows in a commercial featuring Reagan describing California city streets as "jungle paths" and claiming "the jungle is closing in on this little patch that we've been civilizing" in the wake of the Watts riots. We're still hearing some of it parroted back at us today. "Law and order," anyone?

Still, some of Reagan's greatest hits are breezed on by. "The Reagans" does a decent job of addressing how he sold out unions and dismantled social programs in the name of saving taxpayer dollars and progress while demonizing poor Black women as "welfare queens."

But I would trade in the time spent galloping through Reagan's early film career to receive more insight about his and Nancy's abject ignorance to America's LGBTQIA+ community's cries for help when AIDS was tearing through the country during his administration. Indeed, many of the scandals we closely associated with Reagan are hastily shuffled into the fourth hour, along with the requisite "Tear down this wall" soundbite.

Eight years of Reagan produced a legacy we're still grappling with. It's a shame that four hours of "The Reagans" doesn't do a better job of helping us to better understand what his part in reshaping America back then implies about our future.

The first episode of "The Reagans"  premieres Sunday, Nov. 15 at 8 p.m. on Showtime.