Can Joe Biden find a student loan forgiveness plan that will make everyone happy?

Biden confidants are advising the president-elect to forgive student debt in some form. Is there one right answer? 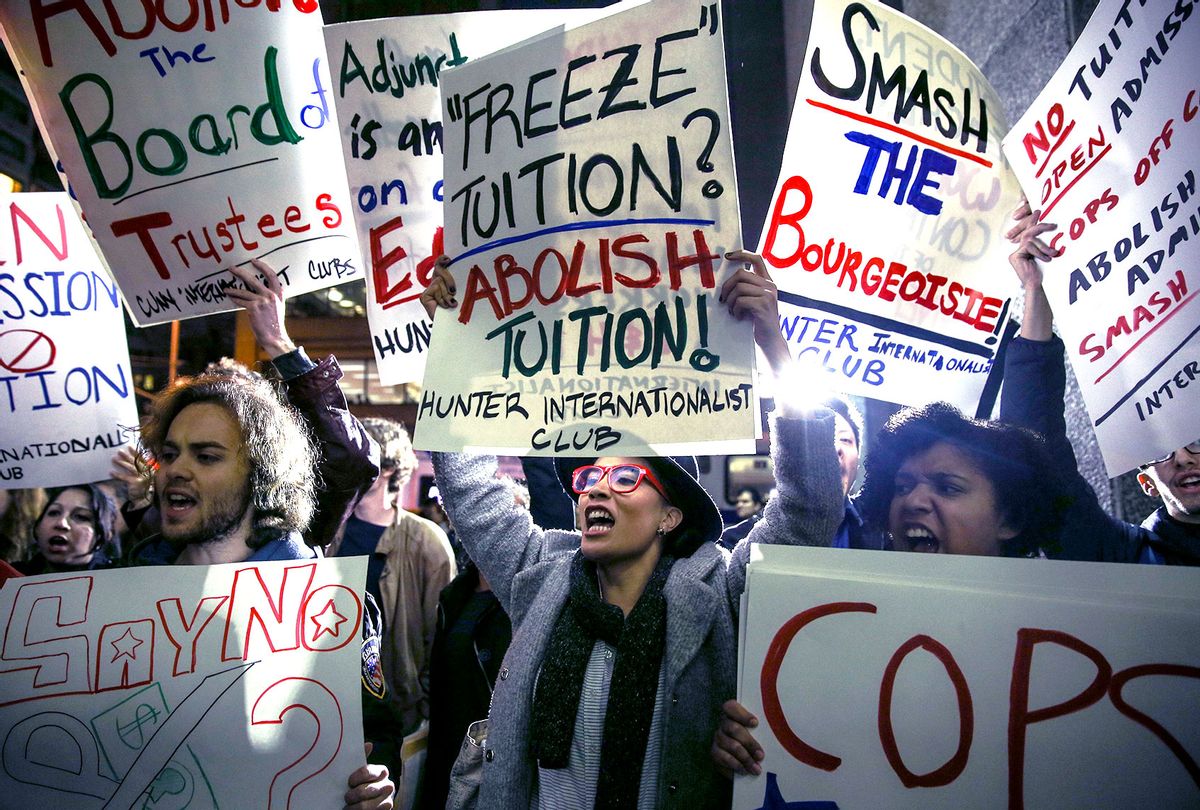 Students hold placards as they stage a demonstration at the Hunter College, which is a part of New York City University, to protest ballooning student loan debt for higher education and rally for tuition-free public colleges in New York on November 13, 2015. (Cem Ozdel/Anadolu Agency/Getty Images)
--

When President-elect Joe Biden takes office on Jan. 20, one of the first questions he will face is how to help the millions of Americans struggling to pay off student debt. His answer to that question could prove one of the touchiest ones of his presidency, as there are Americans who will likely be upset with him no matter what he does. And as Senate Minority Leader Chuck Schumer recently told reporter Anand Giridharadas, he is hoping that Biden will forgive the first $50,000 of student loan debt through an executive order, a measure far more ambitious than what Biden himself proposed during the 2020 campaign.

Although the U.S. Department of Education has provided student loan borrowers with temporary deferments, that period will end on Dec. 31 and there is no immediate plan to replace it, according to CNBC. During the 2020 presidential election, Biden promised to forgive the first $10,000 of student debt for all borrowers, as well as provide total forgiveness for individuals who earn less than $125,000 annually and attended either a public or historically Black university. Schumer, by contrast, is urging Biden to follow a path shaped by Sen. Elizabeth Warren, D-Mass., namely "a proposal... that the first $50,000 of debt be vanquished." Schumer also argued that "we believe that Joe Biden can do that with the pen as opposed to legislation." Even if Biden goes with his original plan, he would still eliminate student debt for roughly 10 million borrowers and reduce America's $1.7 trillion outstanding student loan tab by roughly one-third.

As Georgetown University law professor John Brooks told Salon by email, there is no historical precedent for anything "of this magnitude" in the United States, although he added that "student debt forgiveness itself is very common." He noted that student debt can be forgiven if a student's school closes, they become permanently disabled, "there was some bad behavior by the school or lender ('borrower defense' or 'false certification' discharge)," the student works in public service and has "paid for 10 years (still working out the kinks in this program though)" or someone discharges their student loan debt due to a bankruptcy.

"I have never seen any historical episode with debt forgiveness on this scale in the US," Mathy told Salon. "I have never heard of another country forgiving student debt on this scale either. In terms of debt relief, there is a long history of debt jubilees."

A "debt jubilee" is when all debt is purged from the public records across a sector or nation. Debt jubilees have a long history, stretching back to Babylonian King Hammurabi roughly 3800 years ago to modern Germany, where in 1953 an international decision was made to cancel much of the country's external debt. Some scholars, like anthropologist David Graeber, have advocated a "great reset" in which both international sovereign and consumer debt would be immediately and completely cancelled.

Unless Democrats win the two Georgia Senate runoff elections in January, Biden will have to attempt to implement his program with a Republican Senate that may be inclined to obstruct him. If that happens, he could have to resort to using executive orders to implement student debt forgiveness, a policy move that would almost certainly be challenged in court. At the same time, Senate Republicans may be inclined to work with Biden given that 22 million Americans are currently benefiting from having their student loan repayments paused.

"For millions of borrowers, the fallout from the pandemic is still raging," Seth Frotman, executive director of the Student Borrower Protection Center, told The New York Times. "The thought that their student loan payments will be turned back on and they will get money taken out of their account via auto debit, or they will see their wages garnished once again — the results will be cataclysmic for their finances."

Politically, there is the threat of blowback from those who have already paid off their student loans and think it is unfair for others to not be forced to do so as well.

In a viral editorial last year, Philip Klein of the Washington Examiner argued that Warren's plan to cancel the debt of up to $50,000 for more than 42 million people, or roughly 95% of those with debt, would be "tremendously unfair to those who have been struggling for years to pay off their student loans." He argued that politicians should feel sympathy for "those who may have taken higher-paying jobs they didn't necessarily want to pay off loans. And there are those who have cut expenses to the bare bones to pay off loans while watching their friends with similar salaries eat out and travel and deprioritize paying off loans."

He concluded, "Those who were more responsible will feel justifiably enraged at the idea that those who may have been more profligate will now get a bailout from the government."

Klein's editorial received considerable backlash, with people on Twitter commenting sarcastically that his logic was akin to saying "Free pizza in the HuffPost DC office today. What a slap in the face to those of us who have already eaten" or "Child labor regulations a slap in the face to children who worked in coal mines." Kathi Valeii of The Independent denounced Klein's argument as a "self-centered, mean-spirited 'by-the-bootstraps' mentality." Jessica Young of Medium wrote "implementing a plan like Warren's is not a slap in the face. It's a way to remediate the economic costs of higher education for those who need it most, especially for a generation who was strongly encouraged to go to college and take on risky student loans, with the unfulfilled promise of that it will all pay off in the long run. It is righting a wrong."

This idea of forgiving debt as "righting a wrong" has roots all the way back in the Bible, as economist Michael Hudson wrote in The Washington Post in March.

"Until recently, historians doubted that a debt jubilee would have been possible in practice, or that such proclamations could have been enforced," Hudson explained. "But Assyriologists have found that from the beginning of recorded history in the Near East, it was normal for new rulers to proclaim a debt amnesty upon taking the throne. Instead of blowing a trumpet, the ruler "raised the sacred torch" to signal the amnesty."

He added, "It is now understood that these rulers were not being utopian or idealistic in forgiving debts. The alternative would have been for debtors to fall into bondage."