From Guy Fieri to yogurt cups with abs, how "dude food" is presented and affects what we eat 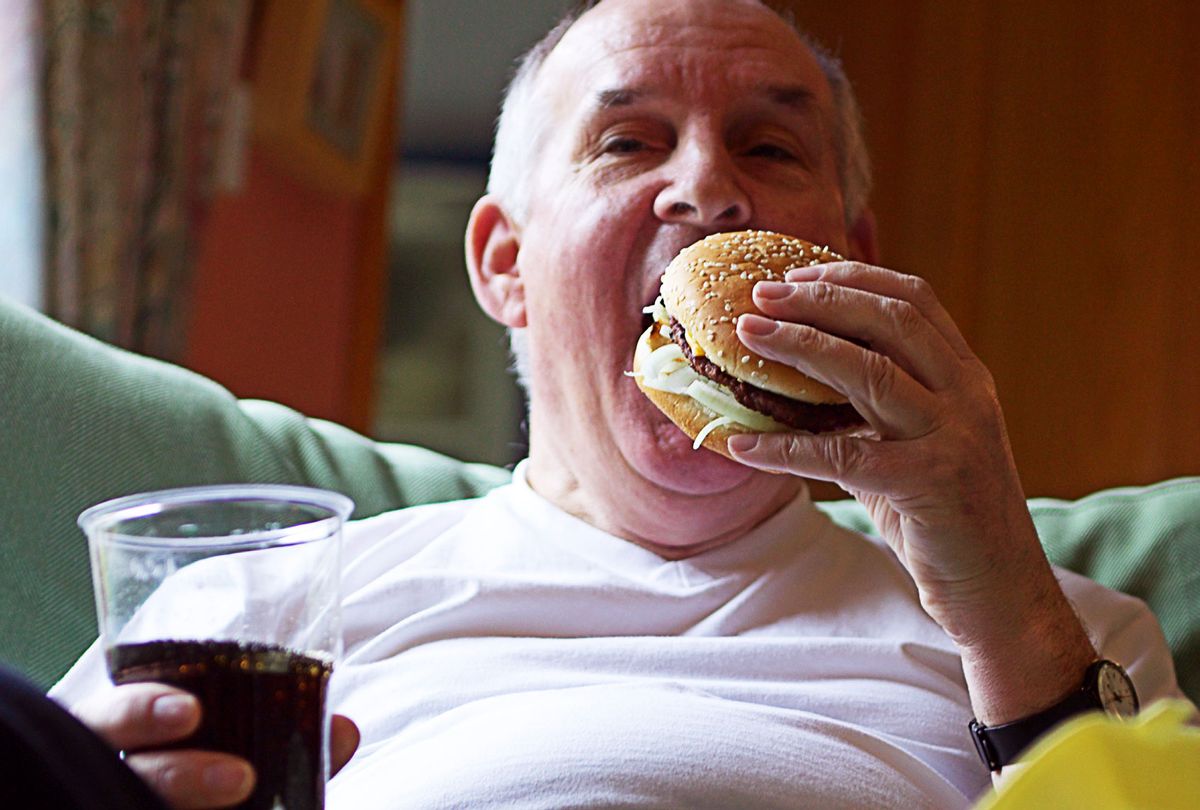 Think about the phrase "dude food" for a minute. What comes to mind? Likely double-stacked burgers topped with heaps of bacon, slabs of ribs with pints of beer, piles of chicken wings dripping with radioactively red hot sauce.

But, as author Emily J. H. Contois writes in her new book, "Diners, Dudes and Diets: How Gender and Power Collide in Food Media and Culture," there's more to the phenomenon of "dude food" than what's on the plate. There are entire industries — production, advertising, television, sales — that have bolstered and reinforced the ideas of what makes a food register culturally as masculine or feminine.

Contois, an assistant professor of media studies at The University of Tulsa who studies the intersection of food and gender, spoke with Salon about how the gendered world of food production and consumption has influenced the way we eat, the strange invention of yogurt cups decorated with shredded abs, and the polarizing appeal of Guy Fieri.

So, before we get into the book — I've followed your work for several years and I was hoping we could talk a little bit about the "Hot Ones" incident that took place in 2018-ish. You were the victim of some pretty severe online backlash from male trolls. I was curious if you could talk about what happened and if that taught you anything different about the intersection of food and gender?

I wrote a short commentary piece analyzing "Hot Ones," a First We Feast YouTube series. I'd been watching it with my husband and we both thought it was a fun show, but because this is what I researched, I couldn't help but notice that there was a competitive element to the pain and the particular ways folks performed celebrity. Then, there was the fact that there weren't a lot of women.

So, I was less interested in that underrepresentation than showing how and why that happens on a show that's about eating spicy chicken wings in public. I wanted to look at how these layered ideas about flavor, about foods that we eat in public, about our gendered ideas about how we're supposed to be supposedly masculine and feminine. So, that plays out differently — I mean, men and women on the show "win" or "lose" differently. That's what I was interested in analyzing.

But then outlets like Breitbart, all they wanted to talk about is the idea that I'm smashing this show because it doesn't have enough women on it, right? This is despite the fact that there was only one sentence [in the piece] to demonstrate the lack of representation. But, intellectually, that wasn't what I was interested in at all.

But that's not how that media machine works. It's about outrage, and not actually engaging ideas. So some of it felt very impersonal – it's what many academics, especially women academics and academics of color go through. But some of it was very personal; there were attacks about me, my husband and my work.

Some of the attacks were food-based, which I thought was interesting. Like, "Get back in the kitchen where you belong," or "Go make me a sandwich, Emily." Did that surprise you?

No, I think I wish that it surprised me. I think, even as it was happening — and I wrote about this in a piece for Nursing Clio — it was  thrilling, a little bit. People could literally see my argument play out. None of it changed the way I wrote my book. It only proved my point.

Guy Fieri and his "Diners, Drive-Ins and Dives" is obviously sort of a jumping-off point for much of this book. Why did he as a character intrigue you?

I'm actually a lot less interested in him as a person than how deeply polarizing the reactions are to him. I was so enthralled with why people love him and hate him. That teaches us a lot about race and class, particularly social class and ideas about populism. So, it's not him himself that's necessarily interesting, but the ways people perceive him. It becomes even more interesting when you consider that he was fully fileted in the New York Times, quite brutally, by Pete Wells. For some people, that would be the end of them, but he was fully recuperated, right? Into this "good dude." Like, "He's a good guy, how dare you," right?

It was interesting seeing how men's magazines in particular played a role in publishing pieces like that and just seeing this sort of rise, which I argue has something to do with the "dude-ish" shift. If he'd been this sort of overly masculine character in a conventional way, that may have played out differently, but the fact that he has sort of this laid back, "don't try too hard, resist the rules" sense to him, he was able to weather that sort of criticism from the food establishment.

This leads to a question I had. For the purposes of this book, what is a "dude"? Because it seems like it implies more than just being a man.

That's a good question because, linguistically, it's kind of synonymous with "guy." But I spend pages historicizing the dude and delving into the specifics of "dude masculinity."

I'm really interested in how the concept of "dude" gave some men who already had significant privilege — white, able-bodied, cisgender, straight and in a particular class — the opportunity to be able to push back against some of the demands of conventional manhood. I talk about hegemonic masculinity and the dominant forms of masculinity at a particular time. So, the dude resists some of that.

Taking a step back from Guy, I was fascinated to read that the co-founder of the Food Network said that "Sociologically, I think the biggest thing we did was Emeril." What was he talking about there?

It's interesting, I had a section that I ultimately took out that sort of talks about the "dude chef" lineage. The bones are still there, though. You have, for instance, "The Galloping Gourmet." He was obviously more of a gourmet chef than Guy Fieri, but he's going to jump over tables and play around a little bit. You know, this rule-breaking man.

Then there's Emeril Lagasse. In the history of the Food Network, they needed to expand their viewership to maintain viability and Emeril does this. He appeals to men. He has "Bam!" and flames. It's more of a conventional masculinity, but he paves the way for Guy to be possible.

I want to talk about yogurt cups. You mention in your book that sort of otherwise innocuous items like these can actually tell us a lot about our culture. What did you find when you were taking a look at how yogurt was marketed differently to men and women?

There's so much to it! Even if we just start with packaging, color, the typography, the symbols. Oh, even the weight of the plastic. If you're getting a yogurt marketed for women, it just collapses in your hand. But then, I wrote about the Dannon Oikos Triple Zero one. It's such a heavier weight. Then there was Powerful Yogurt that had six-pack abs literally chiseled on every cup.

So, it starts there, but you also see it in flavor names. They're often more simple and direct when intended for a male audience. For women, they're often standing in for desert, right? It's key lime pie, instead of just key lime. For men, it's a post-workout snack they recodified.

The chapter that really fascinated me was the fourth: "Marketing Diets to Dudes." I think most women know what it feels like to have a diet marketed to them, but what were some of the ways you found messaging was different when it was aimed at men?

You don't have to be constantly tracking everything or thinking about your body or feeling bad about yourself, right? Like none of the therapeutic work or negative surveillance is anywhere in the messaging for men, while that has been so profoundly, poignantly and painfully part of the message for women for decades.

I think as a society we are understanding more about how gender identity and presentation is a spectrum. There's something beyond and between "masculine" and "feminine." Do you think food marketers are better understanding that in their advertisements?

It's my hope, right? I wrote in my conclusion that I have my hand held out to the advertising industry. We can do this better, and I'm happy to help. I think it's definitely the direction they have to move for younger consumers as we think about gender and inclusion, and the fact that not only does the gender binary damage, it doesn't even resonate with a growing demographic of eaters. But I wish we were already there.

This interview has been edited slightly for clarity and length. "Diners, Dudes and Diets" is now available for purchase.